MONTRÉAL, June 20, 2018 /CNW Telbec/ - The Palais des congrès and Tourisme Montréal teams are delighted to have won the bid to host the 2023 ISTH Annual Congress, a major event organized by the International Society on Thrombosis and Haemostasis. Thanks to the efforts of the two partners, combined with the support of key resources from the life sciences community, nearly 8,000 delegates will meet in Montréal, book 22,400 room nights in the city's hotels and bring in tourism revenues in excess of $21,500,000. 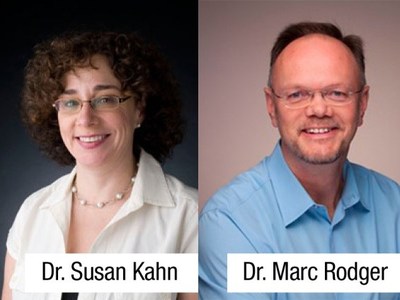 The bid was widely supported by the scientific community. Dr. Susan Kahn and Dr. Marc Rodger, co-directors of CanVECTOR, the Canadian Venous Thromboembolism Clinical Trials and Outcomes Research Network, put together a conference program focused on the development of young and emerging researchers, which wowed the leadership of the international association, which currently has 4,000+ members from 94 countries. "The determination, commitment and energy with which Tourisme Montréal embraced the idea of making our international congress a bona fide success were determining factors in our decision, as were the quality of the venue and the support we can expect from the team of professionals at the Palais des congrès de Montréal," mentioned Lisa Astorga, the ISTH Director of Meetings.

"The researchers' involvement is invaluable to the process of bringing an international conference to Montréal. For those tasked with selecting the host city and site for their next conference, these scientists are the manifestation of the desire, vitality and support of the city's various economic sectors to hold these events that have a tremendous impact on our city. By working closely together to attract major conventions, the universities, the leaders of this key economic cluster, and the Palais des congrès make it possible to generate economic and intellectual benefits for Montréal and Québec," said Raymond Larivée, President and CEO of the Palais des congrès de Montréal.

"The synergy and teamwork displayed by the partners were rewarded with success! Well done! Hosting this international event is excellent for the city's brand as a global convention destination and its reputation as a life sciences hub. The ISTH team and researchers can count on our cooperation to ensure their congress is a success," stated Yves Lalumière, President and CEO of Tourisme Montréal.

The essential involvement of luminariesDr. Kahn is the founder and director of the Centre of Excellence in Thrombosis and Anticoagulation Care at the Jewish General Hospital in Montréal. She is also a Professor in the Department of Medicine of McGill University, where she is Director of the McGill Thrombosis Fellowship. She holds a Canada Research Chair in Venous Thromboembolism. Dr. Marc Rodger is Head of the Division of Hematology and Head of the Thrombosis Program at the Ottawa Hospital and the University of Ottawa. Professor Rodger holds a Faculty of Medicine Clinical Research Chair in Venous Thrombosis and Thrombophilia and a Career Scientist Award from the Heart and Stroke Foundation of Canada.

City renowned for life sciencesOver 600 pharma and healthcare organizations operate in Greater Montréal, making it Canada's biggest laboratory. Ranked 7th among North America's Top 20 cities for life sciences and health technology employment concentration, it is home to 600 establishments and institutions, including 150 public and university research centres1. The bid for the 2023 ISTH Annual Congress was endorsed by the Société des sciences vasculaires du Québec, Thrombosis Canada and the Canadian Hematology Society, among others.

Convention cityMontréal hosts more international events than any other city in the Americas, according to the rankings released by the Union of International Associations. Shortlisted for the World's Best Congress Centre award (AIPC) and the recipient of the highest quality standards certification in the industry, the Palais des congrès de Montréal enjoys the collaboration of leaders from various sectors, who in turn can count on the Palais' experience and support. It is a synergy that continues to foster the international reputation of industries as they evolve.

Tourisme Montréal is a private, non-profit organization that works to position Montréal as an international-calibre leisure and business travel destination. The organization leads innovative tourist welcome strategies with a twofold objective: ensuring that visitors enjoy a quality experience and maximizing the economic benefits of tourism. Uniting more than 800 tourism professionals, Tourisme Montréal plays a leading role in the management and development of Montréal's tourism business, and makes recommendations on issues surrounding the city's economic, urban and cultural development. For more information, go to www.mtl.org.