OTTAWA, Sept. 10, 2019 /CNW/ - The trend in housing starts was 218,998 units in August 2019, compared to 208,931 units in July 2019, according to Canada Mortgage and Housing Corporation (CMHC). This trend measure is a six-month moving average of the monthly seasonally adjusted annual rates (SAAR) of housing starts. 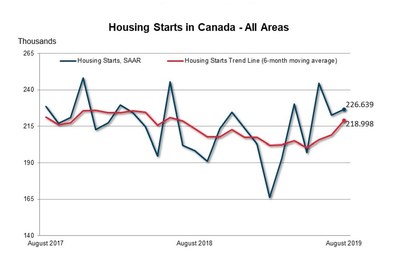 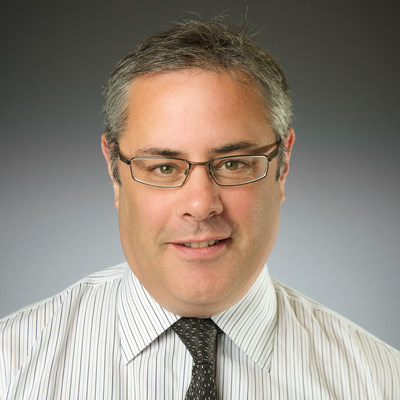 VancouverVancouver Census Metropolitan Area (CMA) housing starts trended lower in August. Compared to the same month last year, both multi-unit and single-detached home starts declined by over 17% in the CMA. However, the year-to-date starts in the CMA remained fairly stable due to a decline in singles starts which was offset by an increase in the multi-units segment.

CalgaryTotal housing starts in the Calgary CMA declined in August 2019 compared to the same month last year as an increase in multi-family construction was offset by a decline in single-detached units. Construction activity continues to slow, as year-to-date housing starts remain lower than last year's levels in both the single-detached and multi-family segments of the market. The relatively slow pace of economic recovery and elevated inventories have caused builders to slow down production.

ReginaThe pace of total housing starts in Regina slowed in August, following a significantly pullback in multi-family production. While the inventory of newly completed and unsold houses has continued to decline, it remains historically high. In addition, builders are facing moderate economic growth prospects, higher construction costs and weaker new home demand. These factors have contributed to a 62% reduction in total residential construction in 2019, compared to the same period in 2018.

GuelphNew home starts in the Guelph CMA continued their upward trend for the second consecutive month. This month's increase was defined by the growth in single-detached starts, reaching a level not seen since December 2017. Following the slowdown in the single-detached sector last year, Guelph CMA is on track to see recovery in starts of this dwelling type.

TorontoAugust total housing starts trended higher in Toronto for all housing types except for semi-detached. Multi-unit home starts are being led by condominium apartments breaking ground because of strong pre-construction sales over the past two-years. Despite single-detached homes trending higher in August, demand for this housing type continues to wane due to rising home ownership costs.

PeterboroughThe trend in total housing starts in the Peterborough CMA stood at a 12-year high in August 2019. The increase was generated by higher trending single-detached and multi-unit starts, the latter of which have been trending higher since March. Apartment starts have already surpassed any annual totals in the last 25 years.

Gatineau Despite a temporary slowdown in August, year-to-date housing starts in the Gatineau CMA have shown strong growth, sitting 58% higher than the same period last year. This significant gain was attributable mainly to the rise in rental housing starts in the Plateau neighbourhood. The aging of the population and the low vacancy rate have continued to stimulate starts of this type in the Gatineau area.

HalifaxTotal housing starts in Halifax dropped in August relative to the same month last year. This was due to fewer new apartment starts whereas single-detached construction increased over the same period.  Despite this, total housing starts in the first 8 months of 2019 are 18% higher than the same period last year. It is no surprise the number of new construction so far this year is the highest on record given the very strong housing demand in both resale and rental markets.

Rural starts were estimated at a seasonally adjusted annual rate of 12,976 units.