TORONTO, Oct. 8, 2019 /CNW/ - Meet a good leader: Confident, smart, organized – and to a majority of Canadian youth, a man. That's according to a new survey on leadership from Plan International Canada, which found only 10 per cent of Canadian youth picture a woman when they think of a CEO. 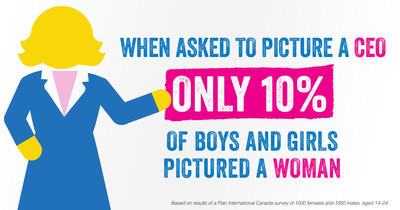 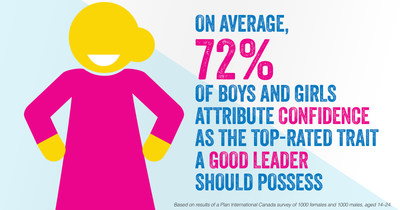 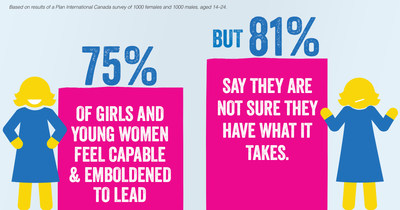 The survey, commissioned to mark International Day of the Girl, found that boys and girls attribute confidence as the top-rated trait a good leader should possess, followed by smart and organized. But while 75 per cent of girls and young women have confidence in their ability to lead, only 55 per cent describe themselves as confident and 81 per cent at least occasionally doubt they have what it takes to be a good leader.

The results suggest that despite progress, gender-related stereotypes and perceptions still pose barriers to leadership for girls. Nearly six in ten girls say they occasionally feel pressure to change how they act in order to achieve their leadership aspirations (57 per cent), and boys are more likely to describe girls as caring (54 per cent) or emotional (53 per cent) rather than confident (32 per cent).

"For the second year in a row our data clearly shows girls and young women in this country are ready and able to lead, but perceptions are still holding them back," says Caroline Riseboro, President & CEO of Plan International Canada. "Although girls are confident in themselves, we need to change the status quo so they have the unwavering support in all areas of their lives that enables achieving their leadership aspirations, whatever they may be."

"The disconnect between ambition and how girls and young women in Canada perceive their capabilities to lead is complicated – but it begins to make sense when focus is placed on the systemic barriers and the role gender socialization plays in shaping attitudes and perceptions from an early age," says Saadya Hamdani, Director, Gender Equality at Plan International Canada. "It's not the potential or capacities of girls that is the problem – it's the reality of the social and institutional environments they are faced with."

For International Day of the Girl 2019, Plan International Canada is calling on all Canadians to support girls on the path to leadership by testing their knowledge, sharing information that challenges existing social norms, and promoting access to resources - like education and skills training - that enable girls to make decisions that support their leadership aspirations. There are several ways Canadians can get involved in defying normal for International Day of the Girl 2019:

About this survey Nanos conducted an online survey of 1,145 girls and 1,065 boys in Canada, between 14 and 24 years of age, between September 15th to 24th, 2019. Participants were administered a survey online. The results were statistically checked and weighted by age using the latest Census information and the sample is geographically stratified to be representative of Canada. No margin of error applies to this research.

In addition to releasing new data, to mark International Day of the Girl Plan International Canada placed over 30 Canadian girls aged 14-24 in day-long seat shares with CEOs, Presidents and business leaders as part of its Girls Belong Here initiative. From the United States to Thailand hundreds of girls are stepping into the roles of media, entertainment, business and politics leading up to and on October 11 to demand equal power, freedom and representation for girls and young women.

About Plan International Canada Plan International Canada is a member of a global organization dedicated to advancing children's rights and equality for girls. We have been building powerful partnerships for children for over 80 years and are now active in more than 70 countries. We are calling on all Canadians to Defy Normal: to believe in the power and potential of every child and to take a stand anywhere children are oppressed, exploited or left behind and anywhere girls aren't equally valued. Together, we can create a world where all unleash their full potential. Visit plancanada.ca for more information and follow @PlanCanada on social media to #DefyNormal and join the conversation.