TORONTO, Oct. 11, 2019 /CNW/ - No fire proximity suit? No problem! Experience the heat without getting burned when Volcanoes: The Fires of Creation opens at the Ontario Science Centre on October 13. A tale of science, culture and thrilling adventure, this new IMAX® film takes audiences on a tectonic world tour—and to the edges of their seats—to experience molten worlds and exploding craters in giant-screen format. 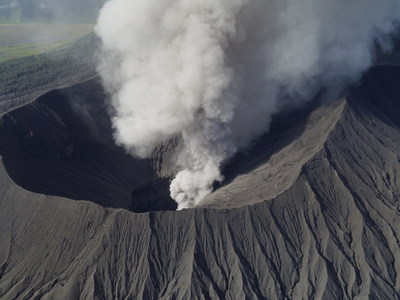 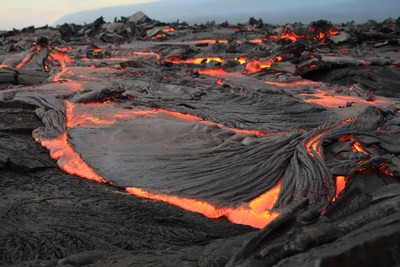 "The geologic architects of our planet, erupting volcanoes are powerful forces of nature that both build and destroy," said Catherine Paisley, Vice-President, Science Education and Experience, Ontario Science Centre. "Through stunning visuals and immersive storytelling, this large-format film recounts the history of volcanoes—from the Earth's beginnings through to present day—by taking audiences around the world to places only a handful of explorers and adventurers have been."

Volcanoes: The Fires of Creation follows intrepid explorer Carsten Peter as he dodges boulders at the edge of an active volcano in Indonesia, descends to a boiling lava lake in Vanuatu and visits incredible acid ponds, geysers and mineral deposit fields in Ethiopia. The film takes audiences across the globe to explore the archaeological ghost town of Pompeii, experience hydrothermal vents at the bottom of the ocean and witness the devastating effects of the 2018 Kilauea eruption in Hawaii.

"Volcanoes: The Fires of Creation was a three-year passion project. As a filmmaker, it was a thrill to shoot volcanoes around the globe, from the bottom of the ocean to mountain peaks," said Michael Dalton-Smith, Director and producer, Volcanoes: The Fires of Creation. "And as a Torontonian, it's equally as thrilling to be able to share the end result—the immense power of volcanoes—with local audiences on the IMAX Dome screen at the Ontario Science Centre."

Earth is a planet born of fire. For billions of years, volcanoes have helped create our world—the continents, the air we breathe and all life on Earth. With over 500 active volcanoes, the Earth is bursting with forces that create extraordinary ecosystems and wildlife habitats. Volcanoes: The Fires of Creation is the story of our planet's creation—and humankind.

"This film lends itself beautifully to the 70mm film format, conveying the sheer magnitude and power of volcanoes through close-ups of bubbling lava, billowing ash plumes and streaming volcanic gases," Wendy MacKeigan, CEO, SK Films. "Volcanoes: The Fires of Creation is an electrifying and educational story that gives audiences the impression that they, too, are standing on the precipice of a volcano."

This family-friendly film has a run time of 42 minutes. Tickets are $9. To watch the Volcanoes: The Fires of Creation trailer and to purchase tickets, please visit OntarioScienceCentre.ca.

Volcanoes: The Fires of Creation is an SK Films Release of a Digital Crossing Films production in association with the Giant Dome Theater Consortium.

About the Ontario Science CentreGuided by our mission to inspire passion for the human adventure of discovery, the Ontario Science Centre strives to be a global leader in lifelong learning; a vital link in Ontario's education and innovation ecosystems; and a convener of public dialogue about technology, science and society. The Centre has welcomed more than 53 million visitors since opening as a Centennial project in 1969, pioneering an interactive approach now adopted by science centres around the world. An agency of the Government of Ontario, the Centre relies on funding from the province, as well as donations from generous individuals, corporations and foundations that share the Centre's vision to contribute to a more curious, creative and resilient world. Learn more at OntarioScienceCentre.ca.

About SK FilmsSK Films is an award-winning content provider and a global leader in the IMAX®/Giant Screen industry. SK works across various genres and platforms, including theatrical, television and digital media, with a special emphasis on creating high impact natural history and science related content. SK has a reputation as one of the most accomplished and respected producers and distributors supplying 3D, 2D and Dome product to IMAX and other Giant Screen theaters worldwide, with a mission to entertain and inspire audiences and immerse them in the awe and wonder of the world we live in. For more information, please visit SKFilms.ca.