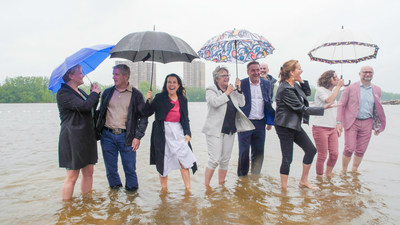 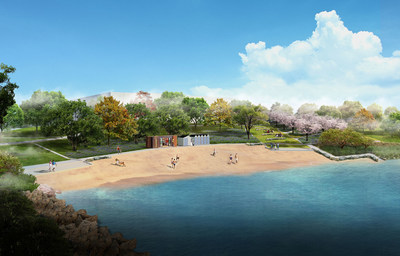 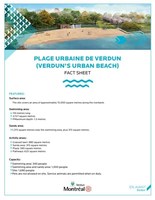 Built with environmental protection and sustainable development in mind, Verdun's urban beach will be open to the public starting on June 22, offering Montrealers and Verdunites privileged access to the St. Lawrence River and its shores. A concrete path will connect the entrance to the site with the swimming area, thereby making the beach universally accessible. The multi-level landscaping and viewpoints will provide visitors with an opportunity to better enjoy the nearness of the river and a wide variety of recreational experiences, with slides, a climbing wall, hammocks and sandy areas. A rock dike and a sand-filled area surrounded by rockfill in the river will ensure calm water for swimming.

Verdun's urban beach, which has now been added to the 150 or so sites within the Trame verte et bleue du Grand Montréal (Greater Montréal's green and blue network), is one of the projects included in the city's water plan (Plan de l'eau). This project was considered a priority following consultations with residents. Similar meetings were held with the Aboriginal community of Kahnawake to make sure that the project was implemented within a sustainable development perspective, particularly respecting fish habitat and bird nesting periods.

"I am really so pleased that this project has finally been completed and that the people can now very safely enjoy the St. Lawrence River and its shores. In addition to enhancing a lush natural environment, Verdun's urban beach is an addition to the Trame verte et bleue du Grand Montréal, with its outstanding site, while contributing toward bolstering the region's recreational, tourism and economic attractiveness for the benefit of the entire community," stated Valérie Plante, Mayor of Montréal and Chair of the Communauté métropolitaine de Montréal.

"As a community, we need revitalization projects designed to improve our residents' quality of life and beautify the city, while respecting the environment and the various species in our midst. Verdun's urban beach project is perfectly in line with our government's desire to rethink urban planning and development. This waterfront area is an oasis of fresh, cool air that we need so much and that will make it possible for residents in Greater Montréal to reclaim the St. Lawrence River, which is truly an asset to the community as a whole," mentioned Chantal Rouleau, Minister for Transport and Minister Responsible for the Metropolis and the Montréal Region.

"I am very proud of the achievement of the first beach located in urban Montréal and on the shores of Verdun, a place that is already very popular with—and very much appreciated by—our residents. The new Verdun beach is the perfect place to relax in the sun, cool off in the water, have fun with family or friends or simply admire the breathtaking view of the St. Lawrence River. Near this site, there are a number of recreational facilities and many shops, which will help make everything even more enjoyable for those who come here. The development of this beautiful site is consolidating the cultural, sports and recreational hub that is taking shape, particularly in this sector of the Borough," emphasized Verdun Borough Mayor Jean-François Parenteau.

"Historically, with the construction of the Seaway, the Mohawk community of Kahnawake lost the access it had to the St. Lawrence River and to fishing. This loss of access resulted in serious consequences for the Mohawk people. The exchange of expertise and the assistance received from the Borough of Verdun during the beach-related consultations enabled us to have these impacts recognized and to support them in carrying out this project," noted Joseph Tokwiro Norton, Grand Chief of the Kahnawake Band Council.

The Borough worked closely with the Ministère de l'Environnement et de la Lutte contre les changements climatiques and the Ministère des Forêts, de la faune et des Parcs to obtain the various permits and authorizations to undertake the project, as well as with the Department of Fisheries and Oceans Canada to carry out the work along the coast. Bays and aquatic beds will be developed next year to improve fish habitat in the area around the beach. More than 12,000 plants were also added within this project: trees, shrubs, perennials, grasses, ferns, etc.

FundingThis project, which benefited from the funding assistance program for projects contributing to the development of the Trame verte et bleue du Grand Montréal, was made possible through a $4.4-million financial contribution that was granted, in equal parts, by the Ministère des Affaires municipales et de l'Habitation (MAMH) and the Communauté métropolitaine de Montréal (CMM). The project, which required a $1.6-million investment from the Borough of Verdun, also received $1 million in financial support from Ville de Montréal.

Located behind the Verdun Auditorium, the beach has excellent public transit access, with the De l'Église metro station nearby as well as two bus lines (routes 37 and 12). It is also accessible by bike along the waterfront bicycle path.

More information on Verdun's urban beach may be found on the Borough's website (ville.montreal.qc.ca/verdun/beach).

About the Trame verte et bleue du Grand MontréalFocused on environmental protection, the objective of the Trame verte et bleue is to provide residents and visitors to Greater Montréal with access to, and enjoyment of, the protected natural environments. The Trame promotes active transportation and includes the region's main natural and heritage components, thereby contributing to its attractiveness. Thanks to the efforts of the Communauté métropolitaine de Montréal (CMM) and its funding program, these sites are more and more numerous and will continue to increase in number over the coming years, consequently creating a vast network of green and blue spaces throughout Greater Montréal. More details may be found on the Communauté métropolitaine de Montréal's website (at www.cmm.qc.ca).