TORONTO, June 26, 2019 /CNW/ - From protecting the environment to redesigning surgical tools to an adjustable-speed robotic heart, Canadian youth are making a difference through science, technology and innovation. Today, the Ontario Science Centre presented six inspiring young innovators from across Canada with the Weston Youth Innovation Award for the valuable work they are doing to make the world a better place. Established in 2008, the Weston Youth Innovation Award recognizes and supports young Canadians who apply science and technology creatively to make a positive difference. Beginning this year, the Award includes new award levels, for a total of five cash prizes. 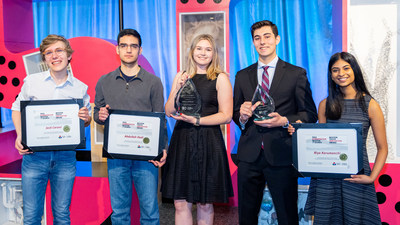 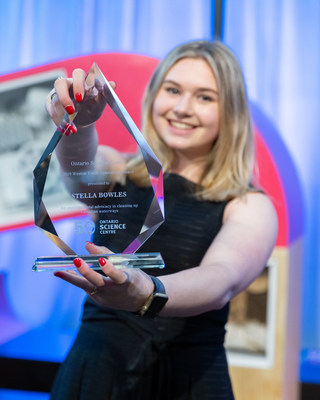 "Although their projects tackle different real-world issues, this year's Weston Youth Innovation Award recipients all share qualities that drive innovation: leadership, passion, creativity, risk-taking and problem-solving," said Maurice Bitran, PhD, CEO and Chief Science Officer, Ontario Science Centre. "As an organization dedicated to encouraging future leaders, we're thrilled to recognize the enterprising efforts of these impressive young innovators and to give them the opportunity to share their projects with Science Centre audiences—and beyond—to inspire other youth."

Fifteen-year-old citizen scientist and environmental activist Stella Bowles from Upper LaHave, Nova Scotia receives first place. Bowles carries out water sampling and successfully works with local, provincial and federal governments to eliminate pipes that dump raw sewage into waterways on Nova Scotia's South Shore. A force of change, she also teaches other youth to test their local water, sharing the story that kids—armed with good science—can make a difference. In addition to a $15,000 cash prize, Bowles receives a Science Centre membership that also provides free admission to more than 300 science centres and museums worldwide. In the next few months, a video animation featuring Bowles will be shared online and shown in the Weston Family Innovation Centre at the Science Centre.

Eighteen-year-old inventor Nicolas Fedrigo from Victoria, British Columbia, takes second place, which includes an $8,500 cash prize, for redesigning a pedicle probe, a surgical instrument used in spinal reconstruction. His prototype uses sensors and microcontrollers to provide doctors with instantaneous feedback, helping them avoid damage to the spinal cord. He tested his device in his kitchen using lamb vertebrae sourced from a local butcher.

This year's increased prize amounts and expanded prize structure are possible thanks to renewed support from The W. Garfield Weston Foundation. In November 2018, the Foundation announced a $180,000 commitment over three years to encourage youth further to pursue science, technology and innovation.

"The Foundation is extremely proud to recognize and celebrate these inspiring young Canadians alongside the Ontario Science Centre," said Wendy Rebanks, Director, The W. Garfield Weston Foundation. "By encouraging and supporting youth innovators like the recipients of this year's Award, we ensure excellence in future innovation for a better Canada—and world."Based on the established judging criteria and after careful deliberation, a jury comprised of local leaders in innovation selected this year's Weston Youth Innovation Award recipients:

About the Weston Youth Innovation AwardsThe Weston Youth Innovation Award was established in 2008 to encourage and recognize young Canadian innovators. It was named in recognition of The W. Garfield Weston Foundation's $15 million lead gift to the Ontario Science Centre's Agents of Change initiative. This national award builds on the Foundation's longstanding tradition of support for the education of Canadian youth.

About the Ontario Science CentreGuided by our mission to inspire passion for the human adventure of discovery, the Ontario Science Centre strives to be a global leader in lifelong learning; a vital link in Ontario's education and innovation ecosystems; and a convener of public dialogue about technology, science and society. The Centre has welcomed more than 53 million visitors since opening as a Centennial project in 1969, pioneering an interactive approach now adopted by science centres around the world. An agency of the Government of Ontario, the Centre relies on funding from the province, as well as donations from generous individuals, corporations and foundations who share the Centre's vision to contribute to a more curious, creative and resilient world. Learn more at OntarioScienceCentre.ca.

About The W. Garfield Weston FoundationFor three generations, The W. Garfield Weston Foundation has pursued its mission to enhance and enrich the lives of Canadians. With a focus on medical research, the environment and education, the Foundation aims to catalyze inquiry and innovation to bring about long-term change. As the Foundation marks its 60th anniversary, it continues to collaborate with a broad range of Canadian charities to further world-class research, explore new ideas and create tangible benefits for the communities in which it works.