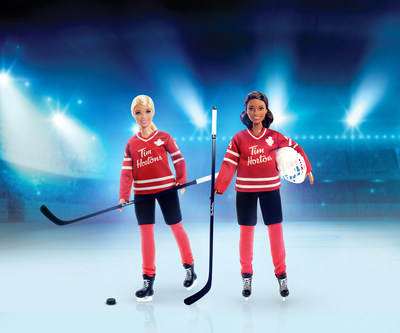 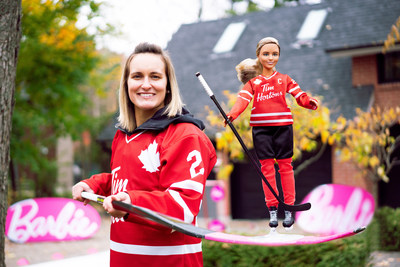 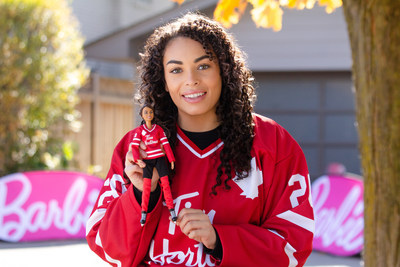 Tim Hortons and Barbie launched Tim Hortons Hockey Barbie as part of a mutual commitment to support girls in pursuing their dreams. The dolls are a part of Barbie's You Can Be Anything program, which inspires girls to reach their limitless potential through imaginative play and engaging with meaningful role models. Research shows that starting at age 5, many girls begin to develop limiting self-beliefs – they stop believing their gender can do or be anything – this is the Dream Gap. One of the ways to help girls believe they can be anything and transcend the Dream Gap is through positive role modeling.

Tim Hortons was excited to launch this partnership based on the recognition that girls are underrepresented in youth hockey. Through the Tim Hortons Timbits Minor Sports Program, hundreds of thousands of kids aged four to nine are provided with opportunities to play house league sports, with a philosophy not based on winning or losing, but on learning a new sport, making new friends, and just being a kid. But traditionally when it comes to Timbits Hockey, only 18 per cent of players are girls.

"As a leader in hockey in Canada, it's important that Tims Hortons shows support for young girls who want to play the sport. We want to ensure that girls feel like they belong in hockey just as much as boys do," said Hope Bagozzi, Chief Marketing Officer for Tim Hortons. "We're really excited about the impact of this partnership with Barbie and to show our strong support for girls' hockey."

The partnership between Tim Hortons and Barbie also includes support from two Canadian women who have broken barriers in the sport of hockey: Marie-Philip Poulin and Sarah Nurse.

Poulin's game-winning goals to secure gold medals for Canada in Vancouver in 2010 and Sochi in 2014, along with her career of accomplishments, led her to be named the world's best female hockey player earlier this year in a poll of NHL hockey players.

Nurse also won a silver medal with Poulin and Team Canada in PyeongChang in 2018. She is also a key contributor and ambassador of the Professional Women's Hockey Player Association (PWHPA) where she advocates to promote, advance, and support a single, viable professional women's ice hockey league in North America that showcases the greatest product of women's professional ice hockey in the world.

To thank Poulin and Nurse for supporting girls' hockey with us, one-of-a-kind dolls made in their likenesses were created as part of Barbie's ongoing global initiative called the Dream Gap Project, which introduces girls to women's stories from all walks of life to show them they can be anything. Poulin and Nurse are also featured in Barbie's latest You Can Be Anything video aimed at inspiring girls to pursue the sport of hockey.

"Barbie was founded in 1959 by Ruth Handler and the philosophy behind Barbie was that through the doll, a little girl could be anything she wanted to be. Today, with the launch of the two Tim Hortons Barbie dolls, girls can imagine themselves as a hockey player," said Tara George, Country Head, Mattel Canada.

"Barbie has inspired girls to be anything by showcasing aspirational roles in fields where women are underrepresented. As a parent who spends a lot of time at the rink, I am incredibly proud of the partnership with Tim Hortons and the opportunity to encourage more girls to get involved in hockey, one of the country's most beloved sports."

A group of girls who graduated from the Timbits Hockey program also recently received the opportunity of a lifetime – a chance to have a one-on-one conversation with Poulin and Nurse. The sessions, which are part of Barbie's You Can Be Anything Program, gave the girls an opportunity to hear from two role models in Canadian women's hockey.

Mattel is a leading global children's entertainment company that specializes in design and production of quality toys and consumer products. We create innovative products and experiences that inspire, entertain and develop children through play. We engage consumers through our portfolio of iconic franchises, including Barbie®, Hot Wheels®, American Girl®, Fisher-Price®, Thomas & Friends® and MEGA®, as well as other popular brands that we own or license in partnership with global entertainment companies. Our offerings include film and television content, gaming, music and live events. We operate in 40 locations and sell products in more than 150 countries in collaboration with the world's leading retail and technology companies. Since its founding in 1945, Mattel is proud to be a trusted partner in exploring the wonder of childhood and empowering kids to reach their full potential. Visit us online at www.mattel.com.

In 1964, the first Tim Hortons® restaurant in Hamilton, Ontario opened its doors and Canadians have been ordering Tim Hortons iconic Original Blend coffee, Double-Double™ coffees, Donuts and Timbits® in the years since. Over the last 55 years, Tim Hortons has captured the hearts and taste buds of Canadians. Tim Hortons is Canada's largest restaurant chain operating in the quick service industry serving over 5 million cups of coffee every day with 80% of Canadians visiting one of nearly 4,000 Tim Hortons in Canada at least once a month. More than a coffee and bake shop, Tim Hortons is part of the Canadian fabric and guests can enjoy hot and cold specialty beverages – including lattes, cappuccinos and espressos, teas and our famous Iced Capps™ – alongside delicious breakfast, sandwiches, wraps, soups and more. Tim Hortons has more than 4,800 restaurants in Canada, the United States and around the world. For more information on Tim Hortons visit TimHortons.ca.