TORONTO, Dec. 18, 2019 /CNW/ - Nickel Creek Platinum Corp. (TSX: NCP) ("Nickel Creek" or the "Company") is pleased to announce the results of its 2019 geophysics program at its 100%-owned Nickel Shäw Project located in the Yukon, Canada.  Using a large loop, transient electromagnetic survey, the program tested the Quill exploration target area, which is along trend approximately 1.7 kilometres to the southeast of the main Wellgreen deposit.  See Figure 1 for a property scale map of the Nickel Shäw Project area. 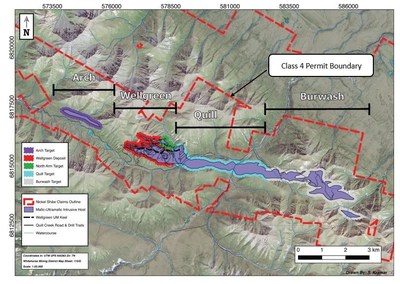 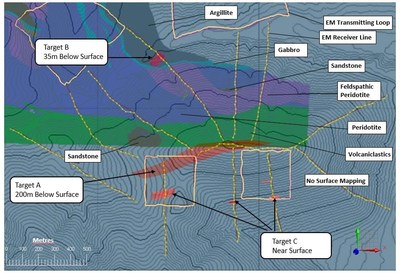 Several strong conductors were identified with the most significant being a large composite conductor located 150 metres south of the interpreted sill-country rock contact as shown in Figure 2. The Company has concluded that this target warrants drill testing as it could potentially be a new area of significant Ni-Cu-PGM mineralization.

Diane Garrett, President and CEO of the Company commented: "We are very pleased with the results from this program.  Quill had been an untested target for the Company until permits were received.  The ground electromagnetic technology is effective at targeting massive sulfides as it can determine the size and orientation of the conductive body. The Target A anomaly is quite extensive in size and, given the conductivity-thickness measurement in excess of 5000 Siemens, indicates possible Ni-Cu-PGM rich massive sulfides.  The strength and character of Anomaly A and the proximity to the well-defined Wellgreen Ni-Cu-PGM mineralization is encouraging."

Diane Garrett continued, noting "Due to the success of the program, we believe this particular technique will be useful at the other targets along trend from the Wellgreen main deposit.  The Company is currently reviewing options for additional electromagnetic programs in the district and drilling of the targets identified thus far at Quill."

The geophysics program at Quill resulted from the 2018 review of the Nickel Shäw Project by Mr. Cam Bell and the Company's technical team (see news release dated June 5, 2019).  The purpose of that detailed review was to determine areas of higher-grade mineralization.  Mr. Brian Bengert of B-Field Geophysics was engaged to design, support and interpret the survey results. The electromagnetic survey was completed in August 2019 by SJ Geophysics and consisted of 4 transmitting loops and approximately 8 kilometres of receiver lines.  The model results were assessed and evaluated by Mr. Bengert, Mr. Bell and Nickel Creek's technical team.

Three main target areas were identified from the survey and are shown in Figure 2.  Target A was modelled as several plates spanning an overall strike length of 800 metres and a dip extent of 200 metres.  Target A has a conductivity-thickness greater than 5,000 Siemens, strikes east-northeast and dips steeply to the south-southeast, and is located south of the interpreted ultramafic sill-country rock contact in the structural hanging wall of the sill.  A conductivity-thickness greater than 5,000 Siemens could only be caused by connected sulphides or significant thicknesses of graphite.  The Target A conductor could potentially be the result of Ni-Cu-PGM bearing magmatic sulphides, Ni-Cu-PGM poor magmatic sulphides, syngenetic (exhalative) sulphides within the country rock or a thick layer of graphite.  Although graphite is a possible cause of the anomaly, no significant graphite has ever been identified within the Nickel Shäw Complex, making the target prospective. Target A does not extend to the surface and will require drill testing to determine the cause of this strong conductor.  Target B consists of a single plate model and is located at the northern ultramafic sill-country rock contact in the structural footwall of the sill.  It is interpreted to be sub-horizontal, lies 30 metres below the surface, is 50 by 50 metres in size and is deemed a secondary drilling target.  Target C consists of several modelled plates located south and east of Target A.  Target C conductors are interpreted to lie near the surface and they are smaller than Target A.  The Target C area has not been mapped or systematically explored since it lies outside of the ultramafic sill outcrop.  Mapping and prospecting of the Target C area is recommended as these conductor plates lie near the surface.

The Company is led by a management team with a proven track record of successful discovery, development, financing and operation of large-scale projects. Our vision is to create value for our shareholders by becoming a leading North American nickel, copper, cobalt and PGM producer.