TORONTO, Sept. 13, 2019 /CNW/ - Cadillac Fairview and First Gulf are pleased to announce that Cadillac Fairview has entered into an unconditional purchase agreement with First Gulf and its partners to acquire 100 per cent ownership of Toronto's East Harbour project, a 38-acre site three kilometers from the city's downtown core, with the objective of completing the plan to create a vibrant destination and new eastern commercial core. This transaction is expected to close on September 25, 2019. 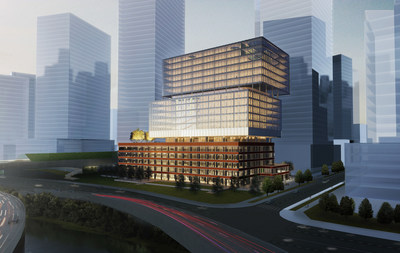 The vision for this ambitious master-planned commercial hub was conceived by First Gulf and its partners, Cowie Capital Partners Inc. and Northglen Investments. In 2018, Toronto City Council approved the East Harbour Master Plan, which provides for 10 million square feet of commercial development, including office, hotel, retail, institutional, entertainment and cultural space. With the capacity to accommodate over 70,000 employees, future growth potential for the site is supported by a planned multi-modal transit hub incorporating GO Train/SmartTrack services, TTC light rail transit and the future Ontario Line subway.

"CF is thrilled to assume stewardship of the East Harbour project and all of the tremendous potential that it represents," said John Sullivan, President and CEO, Cadillac Fairview. "Our commitment now is to sustain the momentum toward realizing the vision of a vibrant new employment and entertainment destination for Torontonians."

First Gulf CEO David Gerofsky stated "On behalf of First Gulf and our partners, I am extremely proud of how we brought this project to life and established support for it. The shared vision, developed in collaboration with community and government stakeholders, establishes East Harbour as a key driver of economic growth and competitiveness for Toronto. We know the project is in good hands with Cadillac Fairview and we look forward to seeing our collective work realized."

CF has been successful in acquiring and developing lands adjacent to a city's traditional financial core, seeding investment in high-potential districts. The company has deployed this core-shifting strategy in downtown Toronto by initiating the development of the South Core with a combined five-tower scheme, including Maple Leaf Square, ICE condominiums and the last building, the 16 York Street office building currently under construction. This strategy has been successfully employed in Montreal with the creation of Quad Windsor, CF's $2 billion development plan, which includes the revitalization of Windsor Station, five residential towers (featuring Tours des Canadiens 1, 2 and 3), and two office towers including Tour Deloitte, which opened in 2015.

Mr. Sullivan points out that CF's role in stimulating economic activity in those hubs is based on a solid understanding of market fundamentals and the need for smart, sustainable development: "The City of Toronto has forecast the need for some 45 million square feet of additional commercial space to accommodate 300,000 employees by the year 2041," he said. "There are very few development sites in the traditional downtown to absorb this kind of growth and East Harbour is a perfect means to extend the city core."

"Establishing East Harbour as an employment destination with multiple uses and amenities will be based on infrastructure that is well-integrated with its surroundings, well-connected with a range of transport options, resilient to long-term changes in the economy and our climate, and responsive to innovations in building systems technologies," said Mr. Barwise, who is predicting the development program to span in excess of 10 years.

The first phase of the development is the adaptive reuse of the existing Soap Factory building, which is a defining element of the overall plan. Cadillac Fairview is currently in discussions with prospective tenants who have expressed interest in this unique opportunity.

As one of largest office complexes in the country, East Harbour's transit infrastructure will connect to the Lakeshore and Markham/Stouffville GO Train lines that currently travel past the site as well as to the future Ontario Line subway, SmartTrack services and TTC light rail transit. The hub will have the capacity to serve an estimated 32,000 GO patrons per hour and help alleviate bottlenecks at Union Station by providing the potential to meet growing demand.

With sustainable innovation and the needs of a knowledge-based workforce guiding the project's design parameters, CF will create space for an affordable employment incubator for the City of Toronto and provide an estimated 30,000 square feet of space for a non-profit community use.

East Harbour also integrates close to nine acres of green space with a network of streets, plazas, sidewalks and open spaces to create an environment where people can relax comfortably and move efficiently. Development plans are based on the latest principles of sustainability and well-being, creating a walkable, bikeable network of paths, bridges and connectivity to public transit.

Cadillac Fairview is one of the largest owners, operators and developers of best-in-class office, retail and mixed-use properties in North America. The Cadillac Fairview portfolio is owned by the Ontario Teachers' Pension Plan, a diversified global investor which administers the pensions of more than 327,000 active and retired school teachers. The real estate portfolio also includes investments in retail, mixed-use and industrial real estate in Brazil, Colombia and Mexico.

First Gulf is an award-winning leader in the development of office, industrial, mixed-use and retail properties with developed assets of over $4 billion completed since the company's inception in 1987. First Gulf is a fully integrated development company and is involved in all aspects of real estate development, from land acquisition and planning approvals to design-build, construction, leasing, financing and property management. To date, First Gulf has developed and constructed over 30 million sf of office, retail, and industrial real estate. First Gulf is part of the Great Gulf Group, one of North America's premier real estate organizations. Established in 1975, with major projects in Canada and the United States, the Group's fully-integrated activities span the entire real estate spectrum.