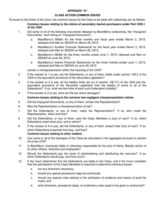 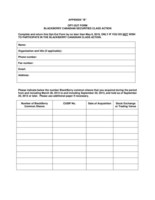 Read this notice carefully as it may affect your legal rights

THIS NOTICE IS TO certain investors in the common shares of BlackBerry Limited ("BlackBerry") during the period from and including March 28, 2013 to and including September 20, 2013 ("Class Period") other than certain persons and entities associated with the defendants, further described below ("Class" and "Class Members").

THE CERTIFICATION ORDER By Order dated February 5, 2019, the Ontario Superior Court of Justice ("Court") has certified, pursuant to the Class Proceedings Act, 1992,

File No. CV-13-495413-00CP ("BlackBerry Canadian Class Action"). The Court has appointed the class action plaintiff, Swisscanto Fondsleitung AG, as the representative plaintiff for the Class, defined as follows:

Excluded from the Class are BlackBerry, Thorsten Heins, Brian Bidulka (collectively, the "Defendants"), their past and present subsidiaries, affiliates, officers, directors, senior employees, partners, legal representatives, heirs, predecessors, successors and assigns, and any individual who is an immediate member of the family of an individual Defendant.

a) you acquired such BlackBerry securities on a Canadian stock exchange or trading venue, regardless of where you may reside; or

Certification is a procedural matter that defines the form of the class action. The merits of the claims in the action, or the allegations of fact on which the claims are based, have not been finally determined by the Court. The Defendants dispute the claims asserted against them.

By Order dated November 17, 2015, the Honourable Justice Belobaba of the Ontario Superior Court of Justice also granted leave to proceed with the statutory secondary market misrepresentation claims under Part XXIII.1 of the Ontario Securities Act and, if necessary, the equivalent provisions of the Securities Legislation. The Defendants sought to appeal from the Court's Order granting leave to proceed to the Ontario Divisional Court. By endorsement dated November 6, 2018, the Divisional Court rejected the Defendants' request to bring an appeal with respect to the Order granting leave, which accordingly became final. Leave of the Court was a necessary precondition to the assertion of these claims.

The statutory claims asserted under the OSA and the Securities Legislation are subject to liability limits, which may cap the amount of damages that can be recovered from each Defendant by way of the BlackBerry Canadian Class Action or any other class or individual proceeding asserting claims under the OSA or the comparable provisions of the Securities Legislation in any other province or territory of Canada. If the Class is successful at trial, it is possible that the damages may exceed the damages caps, if applicable. The common law negligent misrepresentation claims are not subject to liability limits.

If you wish to pursue other claims against the Defendants relating to the matters at issue in the BlackBerry Canadian Class Action, you should immediately seek independent legal advice.

YOU MUST OPT OUT IF YOU DO NOT WANT TO BE BOUND BY THE CLASS ACTION Each Class Member who does not validly opt out of the Class Action will be bound by the terms of any judgment or settlement, whether favourable or not, and will not be allowed to prosecute an independent action.

Class Members who do not want to be bound by the outcome of the BlackBerry Canadian Class Action must "opt out," meaning that they must exclude themselves from the Class Action in accordance with the procedure described herein.

If you wish to opt out of the Class Action, you must complete, sign and return the Opt-Out Form provided at Appendix "B" to RicePoint Administration Inc.

In order for your opt-out to be valid, your complete and signed Opt-Out Form must be postmarked or received by RicePoint Administration Inc. by no later than May 6, 2019.

A Class Member who opts out will not be entitled to participate in the BlackBerry Canadian Class Action.

CLASS COUNSEL AND LEGAL FEES The representative plaintiff and the Class are represented by Siskinds LLP ("Class Counsel"). Class Counsel are conducting the BlackBerry Canadian Class Action on a contingent fee basis.

In the event of success, Class Counsel will make a motion to the Court for approval of their fees and disbursements to be paid from the funds recovered in the BlackBerry Canadian Class Action.

A Class Member will not be required to pay any costs in the event that the BlackBerry Canadian Class Action is unsuccessful.

ADDITIONAL INFORMATION This notice has been approved by the Ontario Superior Court of Justice. The Court offices cannot answer any questions about the matters in this notice. The Orders of the Court and other information in both languages are available on Class Counsel's website at http://www.siskinds.com/blackberry/.

Questions relating to the BlackBerry Canadian Class Action may be directed to Class Counsel:

NOTICE TO BROKERAGE FIRMS Please deliver this notice by email to your clients who purchased BlackBerry's securities during the Class Period and for whom you have valid email addresses. If you have clients who purchased BlackBerry's securities during the Class Period for whom you do not have valid email addresses, please contact RicePoint Administration Inc. to obtain hard copies of this notice for the purpose of mailing the notice to those clients. Brokerage firms may request up to $15,000 in total for the expenses relating to the distribution of this notice to the Class Members. If the amounts submitted in aggregate exceed $15,000, each brokerage firm's claim shall be reduced on a pro rata basis.

The Siskinds LLP class actions team has offices in London and Toronto, and an affiliate office in Québec City. The team, comprised of 25 lawyers admitted to practice in Ontario, Quebec, New York State and the District of Columbia, acts exclusively for plaintiffs and has...