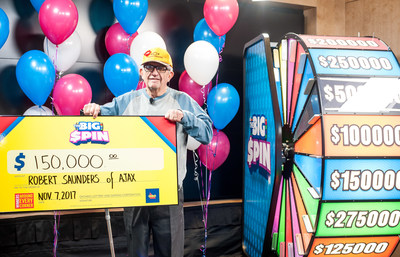 "I decided to buy THE BIG SPIN INSTANT ticket because it was a new game, and really different. My very first ticket was a winner! I only won $5 that time – but I was so happy I decided to buy a few more," shared Bob. "The fourth ticket I played caught me by surprise. I scratched the word 'SPIN' and then saw the words 'BIG SPIN' on the lottery terminal screen. I couldn't believe it. I play the lottery for fun but never expected to win a top prize!"

Bob, a retired security guard, wanted to share the news right away with his wife but knew that she couldn't answer her phone. "Maryanne is a school bus driver so her phone was turned off," shared Bob, "so I went to celebrate my big win with the waitresses at my favourite coffee shop instead.  Now that I've picked up my cheque, I'll go back to the coffee shop and pay it forward by treating some customers and dropping off some gifts for the staff."

With $150,000 in his pocket, the father of two and grandfather of three, also has a couple of other plans in the making. "I'd like to buy my wife a new SUV and then take a driving trip to see family. Paying down some debt is also a priority."

This win comes at good time for Bob and his family. "I had to retire early in part due to health issues – I've had several small strokes over the years. It feels so great to be able to relax, knowing we have this windfall for our future," concluded Bob.

THE BIG SPIN INSTANT game is an exciting new $5 game that combines popular scratch play with prizes revealed in-store by an animated spinning wheel on the lottery terminal screen and potentially, an in-person spin on THE BIG SPIN Wheel at the OLG Prize Centre in Toronto.

The winning ticket was purchased at Rexall Pharma Plus on Westney Road in Ajax.

Winners Around Every Corner

OLG is the Ontario government agency that delivers gaming entertainment in a socially responsible manner. OLG conducts and manages gaming facilities, the sale of province-wide lottery games, PlayOLG Internet gaming, the delivery of bingo and other electronic gaming products at Charitable Gaming Centres and is helping to build a more sustainable horse racing industry in Ontario. Since 1975, OLG has provided nearly $47 billion to the Province and the people of Ontario. These payments to the province support the operation of hospitals, amateur sport through the Quest for Gold program, local and provincial charities and problem gambling prevention, treatment and research.

Click here if you wish to unsubscribe from these emails.