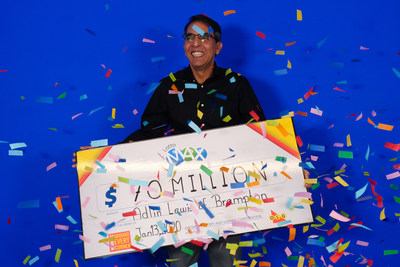 The Brampton resident checked his ticket the morning after the historic draw. "While I was warming up my car, I scanned my ticket on the OLG Lottery App but I got an error message, so I tried again. And then I saw the words 'Big Winner' and the number 70! I was shocked and wanted to confirm what I saw so I went online to see the winning numbers and one by one they matched!"

Though Adlin knew he had a winning ticket, he still went to work and contemplated how to share the unbelievable news with his wife. "I wanted to tell her in a special way – with a trip or something creative – but I couldn't keep this news to myself, so I ended up waking her up in the wee hours of the morning on Thursday and just telling her outright," he laughed.

Adlin has a reputation for being a lucky guy. "A couple of years ago I won a car, and then more recently, I won both the first and second prizes in a workplace holiday draw. When my colleagues found out that the winning $70 million LOTTO MAX ticket was sold in Brampton, they were joking at the office 'Is Adlin here? Did Adlin call in sick today?'" he recalled.

Adlin has played the lottery regularly for over twenty years and often purchases an extra ticket or two when the jackpot is high. "It's funny – I won the record-breaking jackpot with a Free Play ticket!" he smiled.

As for his plans for the life-changing prize? "We have a lot of options now. I'll be making some investments, taking many trips, enjoying life. Also, my wife has always wanted to try those VIP $100 slots in Las Vegas and now I can make that dream come true for her," Adlin concluded.

Since its launch in September 2009, Ontario LOTTO MAX players have won over $5 billion, including 67 jackpot wins and 583 MAXMILLIONS prizes, right across the province.

LOTTO MAX draws are twice a week – on Tuesdays and Fridays. For each $5 play, players receive three sets of seven numbers ranging from one to fifty. Players must match all seven numbers, in any one set, to win the jackpot or the MAXMILLIONS prizes.

The winning ticket was purchased at George's Convenience on Mississauga Road in Brampton.

OLG is a crown agency that develops world-class gaming entertainment for the Province of Ontario. Acting in a socially responsible way, OLG conducts and manages land-based gaming facilities; the sale of province-wide lottery games; PlayOLG Internet gaming; and the delivery of bingo and other electronic gaming products at Charitable Gaming Centres. OLG is also helping to build a more sustainable horse racing industry in Ontario. Since 1975, OLG has provided more than $52 billion to the people and Province of Ontario to support key government priorities like health care; the treatment and prevention of problem gambling; and support for amateur athletes. Each year, proceeds from OLG's operations also support host communities, Ontario First Nations, lottery retailers and local charities across the province.

All for Here - 100 per cent of OLG's proceeds are invested in OntarioOLG.caFollow on Twitter @OLGtoday