CALGARY, April 24, 2019 /CNW/ - WestJet today celebrated the opening of its new Dreamliner maintenance hangar at its hub at Calgary International Airport (YYC). Member of Parliament, Kent Hehr, City of Calgary Councillor, Jyoti Gondek, Calgary Airport Authority President and CEO, Bob Sartor, 1500 WestJet employees and members of WestJet's executive team were on hand for a ribbon-cutting ceremony. WestJet also welcomed members of the Tsuut'ina Nation who led a blessing of the hangar at the end of the ceremony. 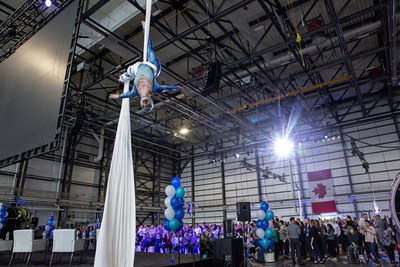 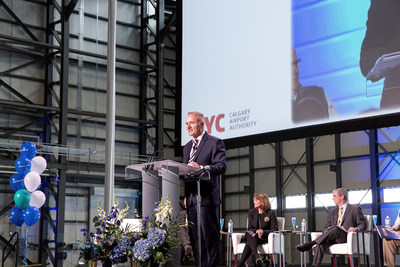 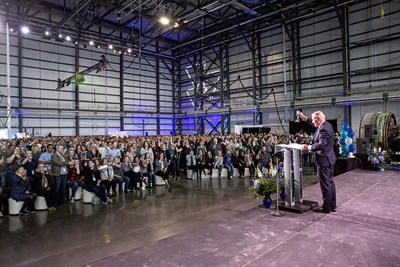 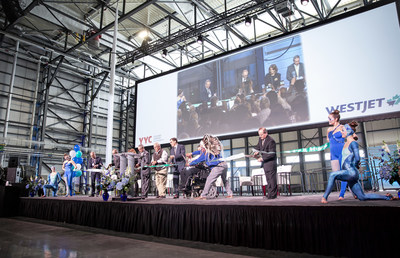 "Today marks another significant step in WestJet's journey as a global network carrier," said Ed Sims, WestJet President and CEO. "This state-of-the-art facility provides the perfect environment for our highly skilled aviation maintenance engineering teams to continue to ensure the safety and comfort of our 25 million annual guests."

WestJet's $50 million investment in the 125,000-square-foot hangar is in addition to the airline's announcement that it will be the first Canadian airline to base its Dreamliner aircraft out of YYC Calgary International Airport. The first three 787 Dreamliner aircraft launch from Calgary on non-stop routes to London, Paris and Dublin on April 28, May 17 and June 1 respectively. Both investments are expected to generate significant economic output and support thousands of direct and indirect jobs in Alberta. WestJet also recently expanded the list of destinations it serves to 67 with the addition of non-stop Atlanta, Portland and Austin routes from Calgary. WestJet remains the airline with the most destinations, seats and departures out of YYC.

WestJet's hangar accommodates one 787-9 Dreamliner aircraft or up to four 737 aircraft. It increases the airline's campus size to 500,000 square feet or 11 acres. The hangar allows for indoor maintenance on the airline's Dreamliner aircraft and can accommodate up to 130 members of the WestJet technical operations teams with workspace and tools to maintain the reliability and safety of WestJet's fleet.

"The opening of this hangar today is another example of how our biggest airline partner, WestJet and the Calgary Airport Authority are working hand-in-hand for the good of the city," said Bob Sartor, The Calgary Airport Authority President and CEO. "WestJet's investment in its Calgary hub has a direct impact on jobs, the economy and all of the opportunities that come with vital air service connecting travellers to other economies and markets."

"Selecting Calgary as the hub for its 787 Dreamliner fleet, and building out the hangar facility, speaks to the confidence WestJet has in the Calgary and Alberta market," said Mary Moran, President & CEO, Calgary Economic Development. "WestJet continues to embody Calgary's entrepreneurial spirit and highlights the opportunity to grow incredible companies here. Our city is a gateway to regional and global markets and having an airline hub makes us a more attractive market for investment through significant passenger and cargo growth."

"CANA is honoured to deliver the new WestJet Dreamliner Hangar to our partners at WestJet," said Fabrizio Carinelli, CANA Construction Ltd. President. "The state-of-the-art hangar was built for safety and efficiency for both WestJet guests and employees but also importantly, its construction generated more than 300,000 people hours to the local economy in Calgary. CANA is privileged to work with WestJet as they go above and beyond to invest in our community and fly to new global destinations."

"Stantec is proud to join our partners at WestJet and the Calgary Airport Authority to celebrate the opening of the Dreamliner hangar," said Russ Wlad, Executive Vice-President, Canada, Stantec. "This project, which was designed by our local team of architects and engineers, will support and promote growth at one of Canada's busiest airports. The Dreamliner will take passengers to new destinations around the world and will create opportunities to bring people to Calgary and Alberta."

WestJet is proud to be recognized for three consecutive years as Best Airline in Canada (2017-19) and awarded among travellers' favorite Mid-Sized Airlines in North America (2019). From 2017-2018, WestJet was also awarded among travellers' favorite Mid-Sized and Low-Cost Airlines in North America. The airline was also recognized among the Economy Class winners in North America, 2018. All awards are based on authentic reviews from the travelling public on TripAdvisor, the world's largest travel site. We are one of very few airlines globally that does not commercially overbook.