CALGARY, July 9, 2018 /CNW/ - Today, WestJet in collaboration with the Canadian Aerophilatelic Society and The Calgary Airport Authority celebrated the 100th anniversary of Western Canada's inaugural air mail flight. The flight was made by aviatrice Katherine Stinson on July 9, 1918, from Calgary to Edmonton, containing a mailbag with a reported 259 letters. 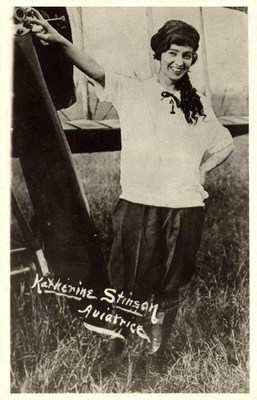 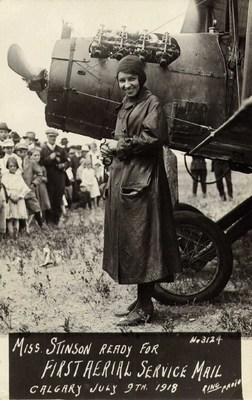 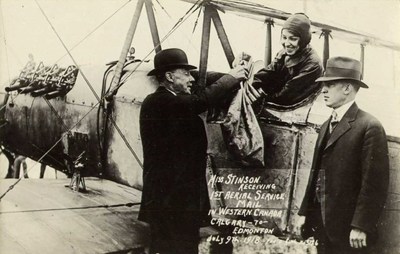 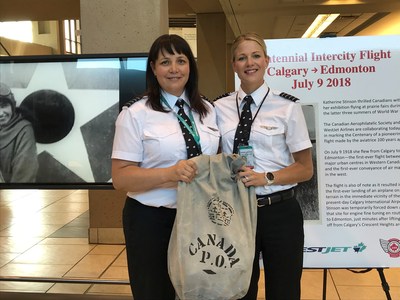 Known by the press as "the birdgirl," Katherine Stinson piloted the first flight using a compass and a map of Alberta. It was the first time in the West and the second time in all of Canada that mail had been transported by air. The plane Stinson flew was custom-built using parts from a number of First World War era aircraft. Her trip also resulted in the first-ever landing on terrain in the immediate vicinity of the present-day YYC Calgary International Airport.

In honour of Stinson, flight 3143 will be flown by WestJet Encore Captain's Athenia Jansen and Janna Breker Kettner.

Athenia Jansen, WestJet Encore Captain"As a female pilot it's an honour to fly WestJet Encore flight 3143 in recognition of Katherine Stinson's first air mail flight in Western Canada. Stinson was one of the world's leading female aviators and Janna and myself are thrilled to commemorate the 100th anniversary of her flight."

Mark Ruel, Director, Air Service Development for The Calgary Airport Authority"Today's acknowledgement of the first air mail flight demonstrates that YYC is a leading cargo gateway in Western Canada, evolving from just one inter-city flight transporting air mail, to offering access to global markets in support of Alberta's strategy to grow international trade. Over 75 per cent of Alberta's air freight is handled at YYC."

Gord Mallett, Canadian Aerophilatelic Society"Several months ago an invitation was extended to WestJet to partner in planning activities linked to the Centenary of Katherine Stinson's July 9 1918 air mail flight between Calgary and Edmonton. The company's response was immediate and very positive. Today's Centennial Flight, conveying 259 commemorative covers between the two Alberta cities, is being realized thanks to the ongoing participation and assistance of WestJet, The Calgary Airport Authority and Canada Post."

About WestJetTogether with WestJet's regional airline, WestJet Encore, we offer scheduled service to more than 100 destinations in North America, Central America, the Caribbean and Europe and to more than 175 destinations in over 20 countries through our airline partnerships. WestJet Vacations offers affordable, flexible vacations to more than 60 destinations and the choice of more than 800 hotels, resorts, condos and villas. Members of the WestJet Rewards program earn WestJet dollars on flights, vacation packages and more. Members use WestJet dollars towards the purchase of flights and vacations packages to any WestJet destination with no blackout periods, and have access to Member Exclusive fares offering deals to WestJet destinations throughout our network and those of our partner airlines.