OTTAWA, Feb. 6, 2019 /CNW/ - VIA Rail Canada (VIA Rail) unveiled this morning the result of significant renovations to its Ottawa station, works that have now made the station the most accessible in its network. Yves Desjardins-Siciliano, President and Chief Executive Officer of VIA Rail, inaugurated the new facilities in the presence of Mrs Kate Young, Parliamentary Secretary to the Minister of Science and Sport, the Minister of Public Services and Procurement and Accessibility, the Honourable Chantal Petitclerc, Senator, and Mr. Jim Tokos, Vice-President of the Canadian Council of the Blind. 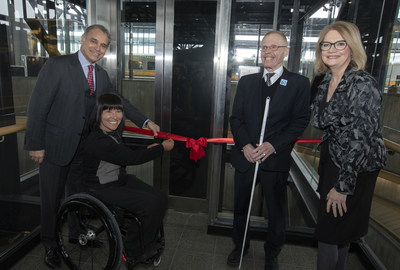 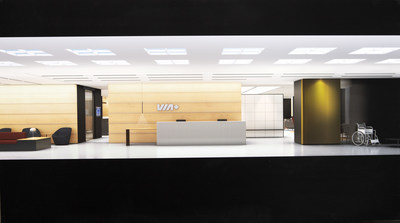 "Renovations like those at VIA Rail's Ottawa Station are crucial to improving accessible travel for all Canadians. I'm happy to see the principles behind our Government's proposed Accessible Canada Act being embraced. By working together, we can identify, remove and prevent barriers in a number of priority areas – ensuring we are inclusive by design," stated Kate Young, Parliamentary Secretary to Minister of Public Services and Procurement and Accessibility (Accessibility).

''I salute VIA Rail's choice to upgrade the level of accessibility of its facilities at the Ottawa Station, which becomes the most accessible station on its network. This choice is another great illustration of the wind of change in Canada over the last few years to reduce the barriers faced by Canadians with disabilities. When all Canadians are included in the smooth running of our society, everyone wins,'' mentioned the Honourable Chantal Petitclerc, Senator.

"With the Ottawa station, rail car renovations, and new rail fleet, we were not just asked to help advise in the process but ultimately to teach the VIA Rail team, who overwhelmingly sought out our suggestions, praising the points we raised as both positive and necessary feedback. VIA Rail quickly recognized that as blind and visually-impaired people, we were living the experience and truly understood the meaning of accessibility. It is with utmost gratification that we acknowledge being treated with dignity and respect throughout the process. We never doubted that we were a valued part of the team. We see the results as an outstanding achievement of that process," mentioned Jim Tokos, National Vice President, Canadian Council of the Blind.

"VIA Rail offers the most accessible intercity mode of transportation in Canada. The facilities inaugurated today are part of our commitment to offer to all Canadians a safe and efficient mode of transportation between the cities of our vast country. In addition, we will pursue our efforts to not only meet, but surpass the requirements of Bill C-81 aimed at making Canada a barrier-free country," announced Yves Desjardins-Siciliano, President and Chief Executive Officer of VIA Rail. "What's more, we are developing a universal accessibility policy which will favour a better integration of the different facets of accessibility, be it in our stations, our trains, our call centres or on the web. I would like to thank all organisations and stakeholders involved, including the Canadian Council of the Blind, the Canadian National Institute for the Blind, the Canadian Association of the Deaf, Kéroul and the Rick Hansen Foundation for their contributions to the renovations of the station and to the development of VIA Rail's different accessibility initiatives."

Last year, VIA Rail carried nearly 4.8 million passengers, many of whom have limited mobility, vision or hearing. In order to provide service that meets their needs, VIA Rail invested more than $162 million since 2010 to make its trains and facilities more accessible.

The $15 million renovations improved accessibility and brought the station in line with international standards.

The renovation projects launched in 2016 included:

VIA Rail also announced the continuation of the transformation of Ottawa station through the renovation and expansion of its Business Class lounge in order to make it fully accessible. Work is scheduled to begin in summer 2019.

It is in the same spirit of accessibility improvement that VIA Rail presented its participation in an International Union of Railways pilot project on navigational autonomy in stations. Tests were conducted on a combination of two technologies enabling passengers with visual impairments to navigate by receiving audio indications as to the station's environment. With the help of a smartphone and a GPS-like system, participants were able to navigate between the station entrance and the boarding platform autonomously. The Ottawa station was one of two stations in the world to participate in the pilot project, the other being owned by SCNF in France.

The tests were carried out in close collaboration with the Canadian Council of the Blind and the Canadian National Institute for the Blind. In light of the results of the pilot project, VIA Rail intends to perfect these new tools and is developing a plan to deploy this innovative technology in other stations in its network. The Crown corporation's stations would be the first in Canada to offer such cutting-edge technology and, thus, greater accessibility for everyone.

In recognition of its involvement and its many initiatives on improving accessibility for all Canadians, VIA Rail will receive the President's Award from the Canadian Council of the Blind during a gala celebrating the organization's 75th anniversary.

The President's Award recognizes an organization for its leadership in its field, major contributions, commitment and initiatives to promote accessibility, understanding and recognition that passengers with visual impairments are equal and contribute to Canadian society.

As Canada's national rail passenger service, VIA Rail (viarail.ca) and all its employees are mandated to provide safe, efficient and economical passenger transportation service, in both official languages of our country. VIA Rail operates intercity, regional and transcontinental trains linking over 400 communities across Canada, and about 180 more communities through intermodal partnerships, and safely transports nearly 4.8 million passengers annually. The Corporation has been awarded five Safety Awards and three Environment Awards by the Railway Association of Canada since 2007. Visit the "About VIA Rail" section at https://www.viarail.ca/en/about-via-rail.