MONTRÉAL, Aug. 19, 2019 /CNW Telbec/ - Town of Mount Royal and CDQP Infra announced this morning the creation of a public space in the heart of Town of Mount Royal, in order to unite its town centre. This public space represents the main legacy of an agreement concluded between the two organizations for creating new urban developments that are convivial and harmonious, and that facilitate movement from one side of the railway track to the other. 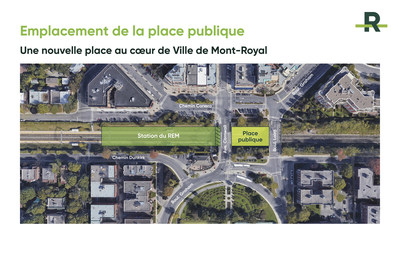 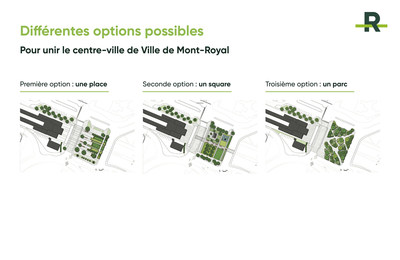 Town of Mount Royal's town centre has historically been separated by a railway track; access to either side of the track is possible via two road bridges—Graham and Cornwall. With these two bridges, the future REM station and the new public space, a whole new living space will be created to allow for the efficient, safe and appealing movement of residents. The public space will cover a total of 2 100 m2 (23,000 square feet) and will be strategically located in the heart of the Town where the main streets converge.

"It's a great day for Mount Royal. Successive municipal governments have dreamed of uniting the eastern and western sectors of the town centre for several decades. With this public square, we are literally creating a new citizen space in the heart of Mount Royal. We intend to integrate it as well as possible into our garden city and make it an extraordinary place" said Philippe Roy, Mayor of Town of Mount Royal.

"The arrival of the REM is the starting point of a new transportation paradigm based on increased travel capacity and fluidity. This type of transformation also represents an opportunity for the municipalities. The collaboration between Town of Mount Royal and CDPQ Infra is an excellent example, where we were able to seize an historic opportunity and create urban developments integrated above a century-old railway track that split in two the core of Town of Mount Royal," explained Harout Chitilian, Executive Director of Corporate Affairs and Development, CDPQ Infra.

Town of Mount Royal will contribute to the initiative by investing $6.5 million. As for CDPQ Infra, adjustments were made to the reference project to integrate this joint venture, while keeping the project costs at $6.3 billion.

The Réseau express métropolitain (REM) is a new, 67-km integrated public transit network that will feature 26 stations and link downtown Montréal, universities, the South Shore, West Island, North Shore and Montréal-Trudeau airport through a fully automated, electric light rail system. Offering high-frequency service, the REM will be in service seven days per week, 20 hours per day, and will be connected to three main Montréal metro lines.