"I've been playing the same LOTTO 6/49 numbers for 20 years," shared Terry, a married father of three. "But I also enjoy playing INSTANT tickets – including THE BIG SPIN." 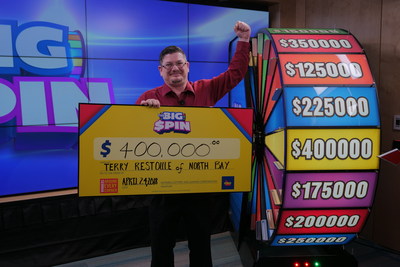 When the 48-year-old stay-at-home dad validated his ticket, the words BIG SPIN appeared, and the lottery terminal shut down. "I had to wait until OLG called – it felt like an eternity!"

Once his big win was confirmed, Terry wasted no time in sharing the good news. "A couple of my friends happened to walk into the store and they took a picture of me with my winning ticket. And then I rushed home to tell my wife, Sibylle, the news."

"When I told her I won a minimum $100,000 prize we did the happy dance. But my wife also said that she'd believe me once she sees the cheque," he laughed.

Terry plans on using some of his windfall to set up education funds for the kids but first there will be a celebration. "We are going to get the whole family together and have a big party!" he smiled.

"This is life-changing for us – life will be much better," Terry concluded.

THE BIG SPIN INSTANT game is an exciting $5 game that combines popular scratch play with prizes revealed in-store by an animated spinning wheel on the lottery terminal screen and potentially, an in-person spin on THE BIG SPIN Wheel at the OLG Prize Centre in Toronto.

The winning ticket was purchased at Esso on Pinewood Park Drive in North Bay.

OLG is the Ontario government agency that delivers gaming entertainment in a socially responsible manner. OLG conducts and manages gaming facilities, the sale of province-wide lottery games, PlayOLG Internet gaming, the delivery of bingo and other electronic gaming products at Charitable Gaming Centres and is helping to build a more sustainable horse racing industry in Ontario. Since 1975, OLG has provided nearly $47 billion to the Province and the people of Ontario. These payments to the province support the operation of hospitals, amateur sport through the Quest for Gold program, local and provincial charities and problem gambling prevention, treatment and research.