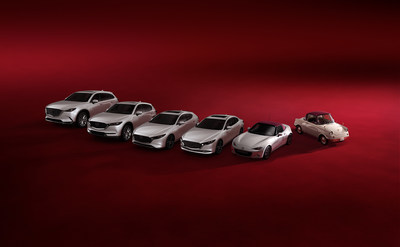 In 1920, Mazda originated as a cork producing company in Hiroshima, with the vision of contributing to society through engineering. Practical founder of Mazda, Jujiro Matsuda, had his sights on making a passenger vehicle accessible to all, enabling people to drive themselves anywhere they wanted to go and enriching their lives as a result; marking the beginning of Mazda's "never-stop challenging" history.

These 100th Anniversary Edition models are a token of our appreciation for those who have supported Mazda since our inception, along with our determination to continue to cherish our founder's aspirations. The models adopt a white-and-red two-tone colour coordination, symbolic of Mazda's first passenger car R360 Coupe, created in 1960. In addition, exclusive components featuring our 100th Anniversary Special Logo are adopted on both exterior and interior of the commemorative models.

The R360 Coupe was Mazda's first passenger car and adopted a futuristic design and unique technologies. To this day, this model stands as the starting point of Mazda's car making.

At the time of its sale in 1960, the model featured an automatic transmission as well as a four-cycle engine which was unprecedented among micro-mini passenger cars of the time. Its distinctive and stylish coupe form significantly contributed towards weight savings. The extensive weight saving efforts also included substantial use of light alloy materials for the power train and the adoption of a monocoque body construction. As a result, the R360 Coupe offered outstanding and affordably priced driving performance that eclipsed the era's preceding micro-mini passenger cars, accelerating the motorization of Japanese society.

The 100th Anniversary Edition models will go on sale in Canada starting in Fall 2020. Pricing and additional details will be released closer to the on-sale date.

Mazda Canada Inc. is responsible for the sales and marketing, customer service and parts support of Mazda vehicles in Canada. Headquartered in Richmond Hill, Ontario, Mazda Canada has a nationwide network of 164 dealerships. For additional information visit Mazda Canada's media website at www.media.mazda.ca.