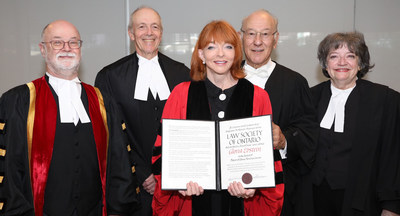 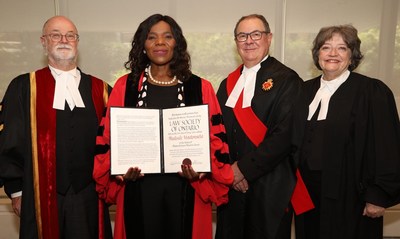 As part of its Call ceremonies each year, the Law Society awards honorary doctorates to distinguished individuals in recognition of outstanding achievements in the legal profession, the rule of law, or the cause of justice. Recipients serve as inspirational keynote speakers for the new lawyers attending the ceremonies.

The Honourable Gloria Epstein received an honorary LLD at the morning Call ceremony on June 25 in recognition of her dedication and contributions to the legal profession and community at large.

Called to the Bar of Ontario in 1979, she practised in two large Toronto law firms before starting her own firm in 1985, at a time when very few law firms were led by women. She was appointed to the Superior Court of Justice in 1993 and then to the Court of Appeal for Ontario in 2007.

While serving as a trial judge, she was appointed by the Premier of Ontario to review the government's involvement in the lives of the Dionne quintuplets.

In 2007, Justice Epstein received a University of Toronto Arbor Award for volunteerism, and in 2013 she received a YWCA Women of Distinction Award.

She retired from the Bench in 2018 to accept an appointment from the Toronto Police Services Board to lead the Independent Civilian Review into the Missing Person Investigations.

Professor Thulisile (Thuli) Madonsela received an honorary LLD at the afternoon Call ceremony on June 25 in recognition of her work in her role as Public Protector for South Africa.

Born in Johannesburg, South Africa, she has worked in several government departments, civil society organizations, and academia throughout her career. Currently the Chair in Social Justice at Stellenbosch University, Professor Madonsela is also the founder of the Thuma Foundation for Democracy, Leadership and Literacy.

In 2009, she was appointed Public Protector by President Jacob Zuma for a seven-year term. She was the only full-time commissioner in the South African Law Reform Commission at the time. During her tenure she investigated several high profile cases and received international praise for her efficiency and professionalism.

An advocate for gender equality and the advancement of women, as well as broader social justice, Madonsela is a member of the South African Women Lawyers Association and One Young World and the World Justice Forum. She has authored and co-authored several publications, including books. She was also one of the drafters of South Africa's current constitution. In 2014, she was named by Time magazine as one of the 100 most influential people in the world.

Earl A. Cherniak, Q.C., received an honorary LLD at the morning Call ceremony on June 26 in recognition of his immense contribution to the legal profession and to the administration of justice in Canada – and for his devotion to the rule of law.

Called to the Bar of Ontario in 1960, he has acted on some of Canada's most important cases, both at trial and at the appellate level. He is also a recognized leader in Alternative Dispute Resolution.

Cherniak was elected as a bencher for the Law Society in 1999 and served until 2007. He is a Fellow of the American College of Trial Lawyers, the International Academy of Trial Lawyers and the Chartered Institute of Arbitrators.

Throughout his career, he has been widely recognized with numerous awards, including the Law Society Medal (2008). He was the first recipient of the Ontario Bar Association's Award for Excellence in Civil Litigation (2004).

Stephen Toope, O.C., received an honorary LLD at the afternoon Call ceremony on June 26 in recognition of his outstanding career as a scholar and academic leader.

Currently the 346th Vice-Chancellor of the University of Cambridge, he has also served as: chair of the United Nations Working Group on Enforced and Involuntary Disappearances; fact-finder for the Commission of Inquiry into the Actions of Canadian Government Officials in relation to Maher Arar; a member of the Commonwealth Group of Experts, Consultation on the Constitution of Sri Lanka; and research director, Office of the Special Representative concerning the Royal Commission on Aboriginal Peoples.

Professor Toope has been widely recognized for his service and accomplishments, including the Queen Elizabeth II Silver Jubilee Medal (2012). He was inducted as an Officer of the Order of Canada in 2015.

Law Society Treasurer Malcolm Mercer awarded the honorary LLD to the recipients at each Call ceremony. There were over 1,300 candidates called to the Bar at the four Toronto ceremonies in June.

SOURCE The Law Society of Ontario

The Law Society of Ontario