TORONTO, Nov. 6, 2018 /CNW/ - In front of her family and friends and with her husband Remy by her side, Bogdanka Knol of Kitchener took a spin on THE BIGGER SPIN Wheel at the OLG Prize Centre in Toronto to win $600,000! Bogdanka is a top prize winner of OLG's new THE BIGGER SPIN INSTANT game (#2124).

"My life has changed in a matter of minutes," smiled Bogdanka, 64. 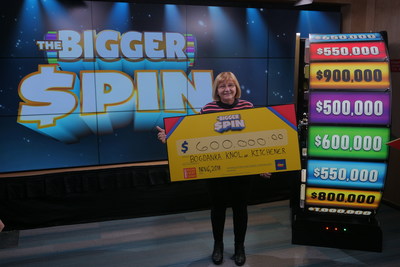 The married, mother of three and grandmother of five started her winning journey when she won $20 on an INSTANT THE BIG SPIN ticket. "I used that prize to buy a BIGGER SPIN ticket," explained Bogdanka. "I scratched my ticket in the store and I thought I'd win $20 again but the virtual wheel stopped on 'BIGGER SPIN!' I was so shocked I started shaking!"

This isn't Bogdanka's first brush with lottery fortune. "A couple years ago, I won $16,500 with POKER LOTTO," she laughed.

Now that Remy can retire, the couple has begun making plans for her windfall. "After paying off some bills and our mortgage, we'll do some travelling and be able to help out the kids financially."

"We are off to enjoy our lives," concluded Bogdanka.

THE BIGGER SPIN INSTANT game is an exciting new $10 game that combines popular scratch play with prizes revealed in-store by an animated spinning wheel on the lottery terminal screen and potentially, an in-person spin on THE BIGGER SPIN Wheel at the OLG Prize Centre in Toronto.

The winning ticket was purchased at Circle K on Doon Village Road in Kitchener.

OLG is a crown agency that develops world-class gaming entertainment for the Province of Ontario.  Acting in a socially responsible way, OLG conducts and manages land-based gaming facilities; the sale of province-wide lottery games; PlayOLG Internet gaming; and the delivery of bingo and other electronic gaming products at Charitable Gaming Centres. OLG is also helping to build a more sustainable horse racing industry in Ontario. Since 1975, OLG has provided nearly $47 billion to the people and Province of Ontario to support key government priorities like health care; the treatment, prevention and research of problem gambling; and support for amateur athletes. Each year, proceeds from OLG's operations also support host communities, Ontario First Nations, lottery retailers and local charities across the province.