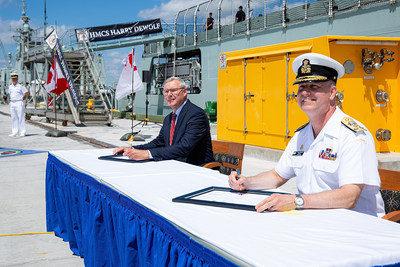 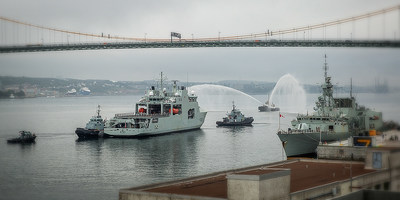 The vessel was moved this morning from Halifax Shipyard to the CFB Halifax Dockyard, where it will be based. An official Acceptance Ceremony was held on the Dockyard NJ Jetty, where ownership of the vessel was signed over to Canada and the Royal Canadian Navy. Mr. Kevin McCoy, President of Irving Shipbuilding, signed on behalf of the 2,000 shipbuilders at Irving Shipbuilding. On the instruction of Vice Admiral Art MacDonald, who signed the Acceptance on behalf of Canada, the ship's company then marched on board to assume command of the vessel.

The HMCS Harry DeWolf is the first of six Arctic and Offshore Patrol Vessels for the Royal Canadian Navy, with the next three already under construction: the future HMCS Margaret Brooke was launched in November 2019 launched and continues construction in the water at Halifax Shipyard, the future HMCS Max Bernays is in the Assembly Hall at Halifax Shipyard preparing for a move to land later this year, while the future HMCS William Hall entered the Assembly Hall last November and will soon have the keel laying. First steel on the fifth Arctic and Offshore Patrol Vessel will be cut in the coming months.

HMCS Harry DeWolf was launched on September 8, 2018, completed successful Builder's Trials at sea in November 2019, then completed a series of Sea Trials (also known as 'Acceptance Trials') earlier this month, followed by crew training for the members of the Royal Canadian Navy who will comprise the ship's company.

The formal Commissioning Ceremony for HMCS Harry DeWolf is scheduled to take place in 2021.

"This is a historic day for our 2,000 shipbuilders and Halifax Shipyard, as we successfully delivered the first-in-class HMCS Harry DeWolf, the lead vessel in Canada's next generation fleet. This brand-new class of Arctic and Offshore Patrol Vessels is the most modern in Canadian history and will provide decades of outstanding service for the men and women of the Royal Canadian Navy. We are immensely proud to be building these ships in Canada and with Canada's best shipbuilders right here in Nova Scotia."

Andy Fillmore, Member of Parliament for Halifax and Parliamentary Secretary to the Minister of Infrastructure and Communities

"The National Shipbuilding Strategy supports our local economy by sustaining more than 4,000 highly skilled jobs at Halifax Shipyard and throughout Nova Scotia. Now, with the successful delivery of the first AOPS built at Halifax Shipyard, we are enhancing our Navy's ability to remain an agile and responsive force, one that can continue to assert and enforce Canada's sovereignty while ensuring it is inclusive and supportive of all of its personnel"

Darrell Samson, Member of Parliament for Sackville-Preston-Chezzetcook and Parliamentary Secretary to the Minister of Veteran Affairs and Associate Minister of National Defense

"I wish to thank all the Canadian shipbuilders that had a hand in making this important achievement a reality. Our local shipbuilding industry is an important source of jobs, pride, and expertise to the region and today our country is safer and more secure thanks to this key addition to our Navy's fleet."

The Honourable Geoff Regan, Member of Parliament for Halifax-West

"The delivery of Canada's first Arctic and Offshore Patrol Vessel is a major milestone that marks the beginning of Canada's next generation fleet for the Royal Canadian Navy. The HMCS Harry DeWolf is the most modern and sophisticated ship in the Royal Canadian Navy and will serve our country proudly for decades to come. Congratulations to the men and women of Halifax Shipyard on this historic moment."

"Congratulations to the world-class shipbuilders at Halifax Shipyard on delivering HMCS Harry DeWolf to the Royal Canadian Navy. This milestone adds to the long, proud history of shipbuilding in Nova Scotia. The industry is an important part of our provincial economy, and I look forward to more success in the future."

"This is a big day for Irving Shipbuilding and for Halifax, demonstrating that even in tough times the shipyard delivers. We can all be proud of the first-class work that has made the Halifax Shipyard an industry leader and a significant contributor to the local and regional economy."

FAST FACTS ABOUT CONSTRUCTING AN ARCTIC AND OFFSHORE PATROL VESSEL:

Irving Shipbuilding Inc., Canada's National Shipbuilder, is the most modern shipbuilder and in-service ship support provider in North America. Headquartered in Halifax, Nova Scotia, our skilled team and innovative facilities provide efficient building, fabrication, conversion and servicing of vessels and offshore platforms. Irving Shipbuilding Inc. is the prime contractor and shipbuilder for the Royal Canadian Navy's next class of Canadian Surface Combatants (CSC) and Arctic and Offshore Patrol Ships (AOPS) as part of the National Shipbuilding Strategy (NSS). We are proud to continue our long history as a trusted partner in Canadian shipbuilding. Irving Shipbuilding Inc. is a member of the J.D. Irving, Limited group of companies, a diverse family owned company with operations in Canada and the United States.  Learn more at www.IrvingShipbuilding.com or www.ShipsforCanada.ca.