TORONTO, Nov. 4, 2019 /CNW/ - (TSX: CGX) - Attention fun-seekers! Whitby is now home to the ultimate playground to dream big and be bold with the opening of a reinvented Playdium entertainment complex today. Located at the Whitby Entertainment Centrum on 75 Consumers Drive, the highly anticipated complex offers over 32,000 square feet of pure fun for teens, their friends and family to play without limits! Whether competing to win some awesome swag, sharing a fresh and delicious meal, hosting parties or team outings, or simply hanging out with friends, Playdium is a community-based space to connect, engage and #LiveWild. 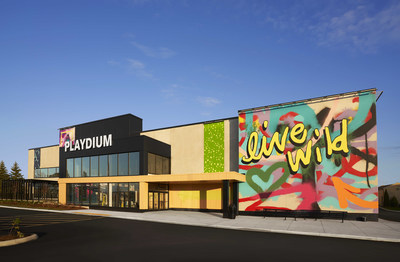 The new Playdium complex will create 150 new jobs for the Whitby community. Approximately two-thirds of the brand-new location is dedicated to gaming and attractions, including state-of-the-art amusement games, ropes course, bowling and virtual reality, with the other third offering a range of on-the-go bites and handcrafted dishes.

Play and Party without Limits

Fuel Up on Food

Are you ready to get your game on? Join the Playdium team for Playdium Whitby's Grand Opening Celebration this Saturday, November 9. There will be tons of prizes, swag, cool activities like face painting and balloon animals, as well as a DJ to keep the party going all day long! Head to www.Playdium.com to learn more about all that Playdium Whitby has to offer!

Cineplex opened its first reinvented Playdium complex in Brampton (ON) in September 2019, with plans to open 10-15 locations in mid-sized communities across the country, including a new location in Dartmouth (NS) in 2020. Cineplex also operates seven locations of The Rec Room – Canada's epic new destination for food and fun for millennials, their friends and families – in South Edmonton (AB), West Edmonton Mall (AB), Calgary (AB), Toronto (ON), London (ON), Mississauga (ON) and St. John's (NFLD). Both Playdium and The Rec Room leverage Cineplex's existing industry-leading entertainment, amusement gaming, food service, content creation, digital media and operational capabilities as well as its relationship with SCENE, Canada's largest entertainment rewards program.

About Cineplex Cineplex (TSX:CGX) is a top-tier Canadian brand that operates in the Film Entertainment and Content, Amusement and Leisure, and Media sectors. A leading entertainment and media company, Cineplex welcomes millions of guests annually through its circuit of...