OAKVILLE, ON, Oct. 15, 2018 /CNW/ - In Kenya, there is only one ice hockey team, and they have nobody to play against. Every Wednesday and Sunday, the Kenya Ice Lions take to the first-ever ice rink in East and Central Africa: a 1,400-square-metre rink at the Panari Sky Center Hotel in Nairobi, Kenya. Located next to Nairobi National Park, is where the Ice Lions take to the rink and play the game they love. 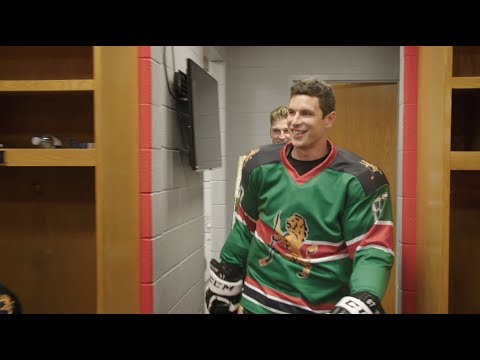 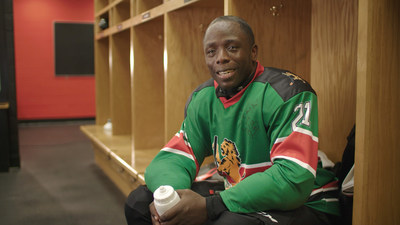 In Canada, it is sometimes taken for granted that Canadians can always find someone to grab a stick, find some ice and play a game. Tim Hortons heard the story about the Kenya Ice Lions and decided to share our love of the game by bringing them to the birthplace of hockey.

"In Canada - and as a company - Hockey is part of our DNA," says Jorge Zaidan, Head of Marketing, Tim Hortons Canada. "We are so inspired by the story of the Lions. Despite having no other teams to play against, the players on the Kenya Ice Lions' passion for the game is unwavering. Their shared passion and love of the game knows no borders."

Moved by their love for Canada's favourite sport, Tim Hortons flew 12 members of the senior Ice Lions team to Canada to have the opportunity to finally play their first game ever against another team. After dressing in brand new CCM hockey equipment and personalized jerseys, they discovered they were in for an even bigger surprise: Sidney Crosby and Nathan MacKinnon were joining them on the ice as teammates.

"I was honoured to be able to join the Ice Lions as they played their first game against another team," said Sidney Crosby, captain of the NHL's Pittsburgh Penguins. "One of the things I love about hockey is how it's able to reach so many people from so many countries around the world and bring them together."

"While we played alongside the Ice Lions for their first game, we know it won't be their last," said Colorado Avalanche star, Nathan MacKinnon. "The team's genuine passion and excitement for hockey is contagious – they were amazing teammates and it was great to play with them."

"It is a dream to not only have the chance to play in Canada, but to play – for the first time – in full gear alongside two of the greatest players of the game," says Benard Azegere, captain of the Kenya Ice Lions." When we first started playing in Kenya, we didn't even have full equipment, but now not only do we have that, we can say we've played a real game with some All-Star teammates."

Tim Hortons made a donation to Kenya's Youth Hockey League to help ensure that the Ice Lions' passion for the sport lives on for the next generation. To see the full video of the Kenya Ice Lions hockey game with Sidney Crosby and Nathan MacKinnon, please visit https://youtu.be/CqYfhY5gVl8.

The video was produced by creative agency Zulu Alpha Kilo, based in Toronto, Ontario.

About TIM HORTONS®Tim Hortons®, part of Restaurant Brands International, is one of North America's largest restaurant chains operating in the quick service segment. Founded as a single location in Canada in 1964, Tim Hortons appeals to a broad range of guest tastes, with a menu that includes premium coffee, hot and cold specialty drinks (including lattes, cappuccinos and espresso shots), specialty teas and fruit smoothies, fresh baked goods, grilled Panini and classic sandwiches, wraps, soups, prepared foods and other food products. Tim Hortons has more than 4,700 system wide restaurants located in Canada, the United States and around the world. More information about the company is available at www.timhortons.com.

NHL and NHL team marks are the property of the NHL and its teams. © NHL 2018.  All Rights Reserved.

About TIM HORTONS® In 1964, the first Tim Hortons® restaurant in Hamilton, Ontario opened its doors and Canadians have been ordering Tim Hortons iconic Original Blend coffee, Double-Double™ coffees, Donuts and Timbits® in the years since. Over the last 55 years, Tim Hortons...