TORONTO, Jan. 29, 2020 /CNW/ - Claire Williams of Maple, the winner of the $50 million jackpot from the Friday, January 17, 2020 LOTTO MAX draw, is humble about her good fortune. "I'm a person of faith and I believe God blessed me with this win. He prepared me by taking me through some difficult times so that when I received this blessing, I would know how to handle it," shared Claire. 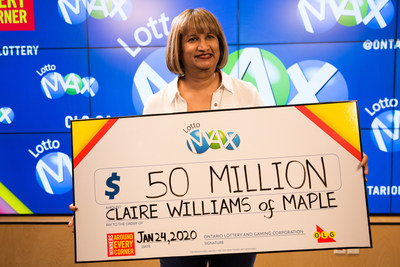 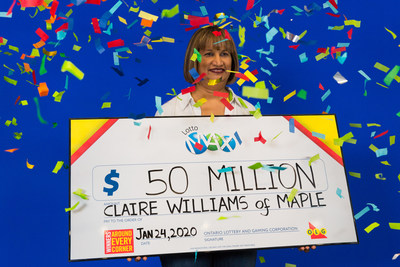 The finance professional was presented her cheque at the OLG Prize Centre in Toronto. "I feel calm now," she smiled. "I was so overwhelmed and emotional at first that I had no appetite. I was so worried I'd lose my ticket that I slept with it under my pillow!"

Claire discovered her $50 million win the morning after the draw. "I was having my breakfast and I looked up the winning numbers on the OLG website – one after another they matched the numbers on my ticket. I fell off my chair when I realized I won," she laughed.

This isn't Claire's first brush with a significant lottery win. The regular LOTTO MAX and LOTTO 6/49 player was at the OLG Prize Centre during the week of January 13 to claim a LOTTO 6/49 win of just over $1,000. "And then several days later, I won an even bigger prize," she exclaimed.

Claire will take some time to let the shock of her big win sink in. "I plan to get some good advice on how to manage this windfall. I'll take care of my family and take things one step at a time."

Travel will also be a part of Claire's future. "But I'll still fly economy," she quipped.

Since its launch in September 2009, Ontario LOTTO MAX players have won over $5 billion, including 68 jackpot wins and 583 MAXMILLIONS prizes, right across the province.

LOTTO MAX draws are twice a week – on Tuesdays and Fridays. For each $5 play, players receive three sets of seven numbers ranging from one to fifty. Players must match all seven numbers, in any one set, to win the jackpot or the MAXMILLIONS prizes.

The winning ticket was purchased at Shell on Rutherford Road in Concord.

OLG is a crown agency that develops world-class gaming entertainment for the Province of Ontario. Acting in a socially responsible way, OLG conducts and manages land-based gaming facilities; the sale of province-wide lottery games; PlayOLG Internet gaming; and the delivery of bingo and other electronic gaming products at Charitable Gaming Centres. OLG is also helping to build a more sustainable horse racing industry in Ontario. Since 1975, OLG has provided more than $52 billion to the people and Province of Ontario to support key government priorities like health care; the treatment and prevention of problem gambling; and support for amateur athletes. Each year, proceeds from OLG's operations also support host communities, Ontario First Nations, lottery retailers and local charities across the province.

Dream to the MAX: Maple Resident 'Blessed' with a $50 Million LOTTO MAX Jackpot