MONTREAL, Aug. 23, 2017 /CNW/ - The Canadian Coast Guard is currently nearing the midway point of the 2017 Arctic season. Icebreaking operations in support of industry resupply to Arctic communities in the lower Arctic have been completed. Coast Guard vessels are now providing ice escorts and icebreaking to support shipping and resupply to communities in the high Arctic. 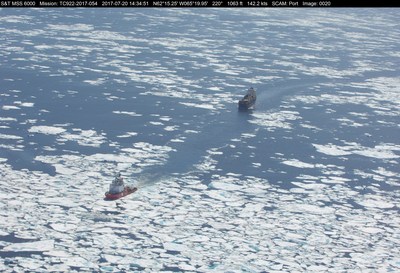 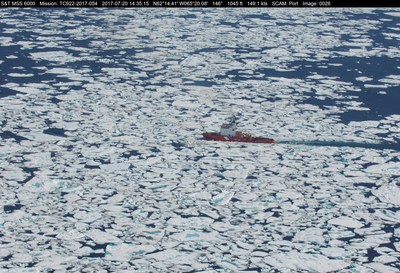 The Canadian Coast Guard will continue to work with industry in the coming months to ensure scheduled vessel traffic can move into and out of Arctic waters and community harbours safely and efficiently. Canadian Coast Guard vessels are also at the ready to respond to environmental response incidents or other urgent or humanitarian emergencies in the Arctic.

The Marine Communications and Traffic Services Centre (MCTS) in Iqaluit has been open since mid-May. As of July 31, 2017, MCTS Iqaluit had provided support for 86 vessels in the Northern Canada Vessel Traffic Services Zone (NORDREG). These vessels include cargo / fuel ships, tugs & fishing vessels, cruise ships and pleasure crafts and adventurers. This number is in keeping with averages in previous years. Among the vessels that have completed a Northwest Passage transit in 2017 is the Finnish icebreaker Nordica that entered Canadian waters in the Beaufort Sea on July 17 and exited Canadian waters in Baffin Bay on July 26, en route to Nuuk, Greenland.

The planned departures of CCGS Pierre Radisson and CCGS Louis S. St-Laurent to join our Arctic operations are scheduled for August 25 and August 28, respectively.

CCGS Amundsen, under ArcticNet science programming, will carry out the "Nunavik Inuit Health Survey' in Nunavik in the coming months. CCGS Amundsen science missions have been directed by ArcticNet, since 2003, under a Cost Sharing Agreement between the Canadian Coast Guard and the Université Laval. Under this Agreement, CCGS Amundsen remains available to the Canadian Coast Guard for search and rescue, environmental protection, or urgent humanitarian aid. Otherwise, CCGS Amundsen and crew are dedicated to primary ArcticNet science missions.

Other vessel traffic of note for the Arctic / Northwest Passage in the coming months include the United States Coast Guard Cutter Maple, that left its homeport of Sitka, Alaska on July 12, en route via the Northwest Passage to a port in Maryland, USA, by the end of August. The Polar Prince entered Eastern Arctic waters on July 27, from Newfoundland and is sailing west as part of the C3 Expedition marking Canada's 150th anniversary. The cruise ship Crystal Serenity will again transit the Northwest Passage from west to east in August/September.

The Canadian Coast Guard is proud to support our northernmost communities and CCGS Sir Wilfrid Laurier has once again partnered with Polar Bike Project organizers for the opportunistic delivery of over 50 donated bicycles in September. This year the bikes will go to the community of Gjoa Haven in the Central Arctic. This volunteer-based initiative helps to bring needed bicycles to youth in Arctic communities while our vessels are in the Arctic.

Some annual scientific missions such as Canada's Three Oceans (C30) have concluded, while others are underway or just starting. The Canadian Hydrographic Service continues to collect data for use in Arctic charting and will be collecting bathymetric data in Ungava Bay and Chesterfield Inlet using state-of-the art multi-beam sonar systems.

The Canadian Coast Guard is pleased to welcome our partners, the Royal Canadian Navy, aboard our icebreakers in the Arctic. This affords senior personnel and cadets opportunities for training and familiarization regarding Arctic operations as they prepare for their Arctic Offshore Patrol Ship program.

Under the Government of Canada's Oceans Protection Plan, the Canadian Coast Guard personnel are continuing to work with Arctic communities and the Canadian Coast Guard Auxiliary towards expansion of additional auxiliary units across the Arctic. Plans include increased capacity for search and rescue and environmental response in the north. Consultations and engagements are continuing and we will provide more information once those plans are finalized.

The Canadian Coast Guard reminds all mariners in smaller vessels to ensure that each occupant onboard the vessel is wearing an appropriate lifejacket or immersion suit; to ensure boat and motor are in good operating condition; to carry onboard additional fuel, food and equipment and to carry a signaling device in case of emergency and to always leave a plan with someone about your travels.

Weather changes can happen quickly, especially in the Arctic. Coast Guard operational plans (routes and dates) are subject to change with little or no notice due to ice conditions, changes by industry to their shipping schedules, or other unexpected situations. Broken and fragmented icy tracks left behind by icebreaking operations or other ship traffic may not freeze over immediately. Sudden changes in weather may also create unsafe ice conditions that may remain long after the ships have left the area.

All ice on or near the planned shipping routes and icebreaking operations should be considered unsafe during and after ship transits through these routes. The Canadian Coast Guard is advising residents to stay off the ice and operators of small vessels to stay clear of these areas, or use extreme caution.

QUOTES: The women and men of the Canadian Coast Guard work hard every day to ensure the safety and security of our marine environment from coast to coast to coast. Guided by the Oceans Protection Plan, the Canadian Coast Guard is growing; is reaching out to more partners and communities than ever before; is engaging our Indigenous communities; and is well positioned to support ocean science, management and maritime security now and in the future.

The Honourable Dominic LeBlanc, Minister of Fisheries, Oceans and the Canadian Coast Guard

Quick Facts To date this season, icebreaking operations have been concentrated in the eastern Arctic which has continued to see heavy ice conditions well into July. As of August 1st, our Arctic operations had logged the following: