TORONTO, Feb. 2, 2018 /CNW/ - Shortly after the Super Bowl kicks off on Sunday, tens of millions of people around the world will watch the incredible story of Canadian Paralympic Alpine Skier, Lauren Woolstencroft, who overcame seemingly impossible odds to achieve incredible success. 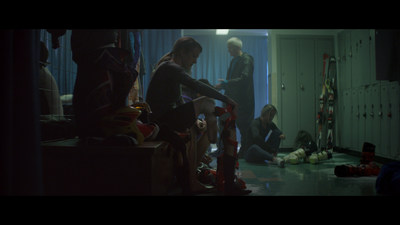 In the first post-kickoff spot on the North American broadcast, Woolstencroft's 60-second story will air.  And the ad won't feature a vehicle - a first for Toyota. Titled "Good Odds," the spot instead highlights the real-life story of Woolstencroft, a young woman who overcame incredible odds to become a legendary Paralympian, winning eight gold medals, a silver medal and a bronze medal over three Paralympic Games.

"If I could describe my journey in the Paralympic Games in one word, I would say determination," said Woolstencroft. "It's been a wonderful experience partnering with Toyota on this global platform to tell my story of overcoming odds. I hope that my participation will encourage and inspire others around the world to pursue their passions, and reach for their own personal best."

"Good Odds" will be the second spot to premiere as part of Toyota's first-ever global ad campaign called "Start Your Impossible". The campaign, which will include several other videos and pieces of creative that will be seen around the world leading up to and during the Paralympic and Olympic Games, embraces Toyota's evolution toward becoming a mobility company and its eight-year global sponsorship with The Paralympic Games and Olympic Games.

Toyota believes that mobility goes beyond cars. The company's vision is to reduce barriers and increase access in order to build an inclusive society in which all people can participate. The recently launched "Start Your Impossible" campaign reflects these values and highlights the company's goal to provide freedom of mobility for all.

"Sports inspire people to overcome challenges and make dreams come true, and Lauren's story is a perfect example of that," said Cyril Dimitris, Vice President of Sales and Marketing, Toyota Canada. "We're so proud to have Canadian stories, including Lauren's, highlighted in Toyota's first ever global ad campaign, and we hope they will inspire more Canadians – and others around the world - to start their own impossible."

"To be placed in a lead position during one of the most watched broadcasts on earth… You don't get much bigger than that.  We're happy for Lauren and we're proud to bring this amazing Canadian's story to the world."

About Toyota Canada Inc.Toyota Canada Inc. (TCI) is the exclusive Canadian distributor of Toyota and Lexus vehicles.  Toyota has sold over 5 million vehicles in Canada through a national network of 287 Toyota and Lexus dealerships.  Toyota is dedicated to bringing safety, quality, dependability and reliability in the vehicles Canadians drive and the service they receive.  TCI's head office is located in Toronto, with regional offices in Vancouver, Calgary, Montreal and Halifax and parts distribution centres in Toronto and Vancouver.  Toyota operates two manufacturing facilities in Canada. Having produced more than seven million vehicles, popular Canadian models built at these facilities include Toyota RAV4, Toyota Corolla, Lexus RX 350 and RX 450h hybrid.