TORONTO, March 11, 2019 /CNW/ - Journalists for Human Rights and Massey College are celebrating the book launch of 'Journalist on Trial' by Rodney Sieh on Tuesday March 12, from 5:30 - 7PM at Massey College, 4 Devonshire Pl, Toronto, ON M5S 2E1 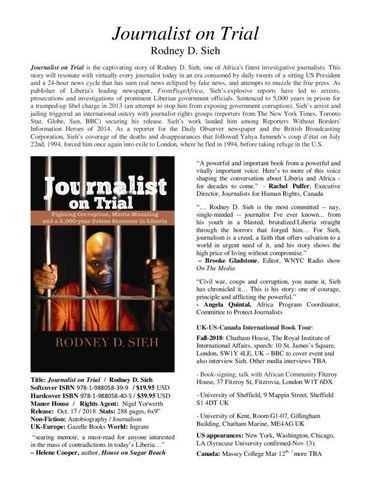 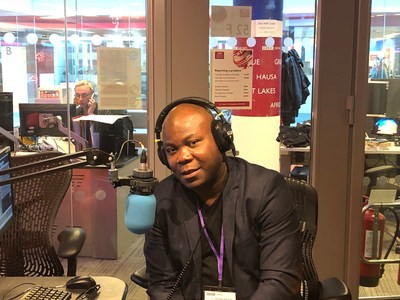 Journalist on Trial is the captivating story of Rodney D. Sieh, one of Africa's finest investigative journalists. This story will resonate with virtually every journalist today in an era consumed by daily tweets of a sitting US President and a 24-hour news cycle that has seen real news eclipsed by fake news, and attempts to muzzle the free press. As publisher of Liberia's leading newspaper, FrontPageAfrica, Sieh's explosive reports have led to arrests, prosecutions and investigations of prominent Liberian government officials. Sentenced to 5,000 years in prison for a trumped-up libel charge in 2013 (an attempt to stop him from exposing government corruption), Sieh's arrest and jailing triggered an international outcry with journalist rights groups (reporters from The New York Times, Toronto Star, Globe, Sun, BBC) securing his release. Sieh's work landed him among Reporters Without Borders' Information Heroes of 2014. As a reporter for the Daily Observer newspaper and the British Broadcasting Corporation, Sieh's coverage of the deaths and disappearances that followed Yahya Jammeh's coup d'état on July 22nd, 1994, forced him once again into exile to London, where he fled in 1994, before taking refuge in the U.S.

Rodney's book shows the crucial role of journalism in countering corruption, especially when corruption keeps millions in poverty. He was arrested and imprisoned for investigating corrupt authorities.

Despite this, Rodney's courageous and indefatigable reporting has seen ministers investigated and held accountable for corruption, and billions of dollars in foreign aid recovered and redirected to where it was intended to go.

Hard copies of 'Journalist on Trial' are available asap from publisher Michael Davie at Manor House at [email protected].

"A powerful and important book from a powerful and vitally important voice. Here's to more of this voice shaping the conversation about Liberia and Africa - for decades to come." - Rachel Pulfer, Executive Director, Journalists for Human Rights, Canada

"... Rodney D. Sieh is the most committed -- nay, single-minded -- journalist I've ever known... from his youth in a blasted, brutalized Liberia straight through the horrors that forged him... For Sieh, journalism is a creed, a faith that offers salvation to a world in urgent need of it, and his story shows the high price of living without compromise."– Brooke Gladstone, Editor, WNYC Radio show On The Media

Rodney Sieh is the 2016-2017 Gordon N. Fisher / JHR Fellow at Massey College, part of the William Southam Journalism Fellowships. He is the founder and editor of FrontPageAfrica, Liberia's leading newspaper of record. Twice imprisoned for his work as a journalist for exposing the ills and the corrupt, he was voted in 2014 among the top 100 Information Heroes in the world by Reporters Without Borders. FrontPageAfrica also received the 2014 Reporters Without Borders – TV5Monde Prize for Press Freedom.

●     Our thanks to CNW Group for sponsoring this announcement   -