ST. JOHN'S, May 6, 2019 /CNW/ - Canada's marine protected areas are more important than ever.  The Committee on the Status of Endangered Wildlife in Canada (COSEWIC) has just assessed three whales, including two of the world's largest, as under threat in Canadian waters.

Fast-swimming Sei Whales are global citizens who swim thousands of kilometers to find the best places to mate, give birth, and feed.  The continuing low numbers in the aftermath of whaling led COSEWIC to determine the status of Sei Whale as Endangered. 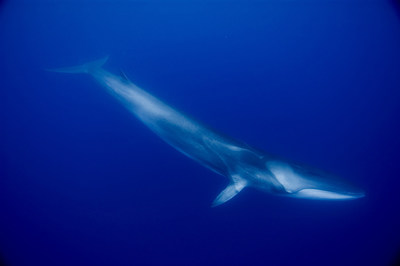 "Commercial hunting for Sei Whales only ceased in the 1970s, less than a lifetime ago for these large animals," noted Hal Whitehead, a whale expert and a Co-chair of the COSEWIC Marine Mammals Specialist Subcommittee.

Fin Whales may be faster, and stay closer to shore than Sei Whales, but individuals can range from Canada to the US, and even over to Greenland.  Populations in both the Atlantic and Pacific Oceans were considered at the COSEWIC meeting to be of Special Concern.

The slower, smaller, deep-water Sowerby's Beaked Whale, found in the Atlantic, was also assessed as being of Special Concern.  It is a member of a little-known family that is making the news as a result of fatal strandings.

Like the Blue Whale and the North Atlantic Right Whale, all three of the whales recently considered by COSEWIC are threatened by human activity.  All get tangled in fishing gear, and all are struck and killed by the ever-increasing number of large ships.  And, because all evolved in a quieter sea, the noise from ships, naval exercises, and ongoing seismic exploration impedes their communication and survival.

Sowerby's Beaked Whale seems to be particularly susceptible to noise pollution.  Much like bats, it uses sound to navigate and hunt, and human-generated noise impairs its ability to find its way.  Increased noise from seismic exploration and military exercises is linked to injuries and death of other beaked whales.

Sightings of Sowerby's Beaked Whale have increased in the Gully submarine canyon off the coast of Nova Scotia since it was made a Marine Protected Area in 2004.

"Noise levels are now likely lower in the Gully since it was protected," suggested Whitehead. "These refuges offer some hope for all these species and should be expanded, even into international waters."

Indeed, the future of wide-ranging species like whales relies on decisions and practices in many countries.  Shared responsibility calls for shared action.  According to John Reynolds, Chair of COSEWIC, "Species don't care about borders. We need to address threats as a global community.  No country can save these species on its own."

Next meetingCOSEWIC's next scheduled wildlife species assessment meeting will be held in November 2019.

About COSEWIC COSEWIC assesses the status of wild species, subspecies, varieties, or other important units of biological diversity, considered to be at risk in Canada. To do so, COSEWIC uses scientific, Aboriginal traditional and community knowledge provided by experts from governments, academia and other organizations. Summaries of assessments are currently available to the public on the COSEWIC website (https://www.canada.ca/en/environment-climate-change/services/committee-status-endangered-wildlife/assessments.html) and will be submitted to the Federal Minister of the Environment and Climate Change in fall 2019 for listing consideration under the Species at Risk Act (SARA). At that time, the status reports and status appraisal summaries will be publicly available on the Species at Risk Public Registry (https://www.canada.ca/en/environment-climate-change/services/species-risk-public-registry.html).