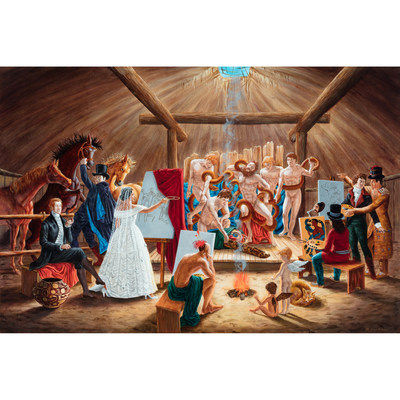 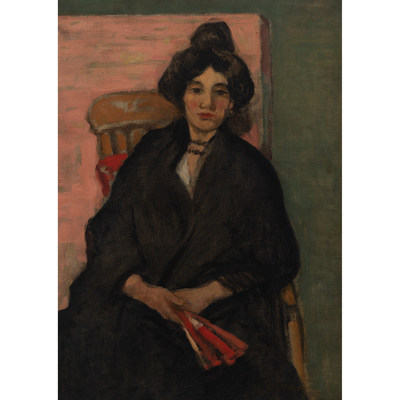 Paul Rand's, Early Morning (lot 79) graces the cover of this season's Canadian Fine Art catalogue and is an example of an undiscovered gem sourced from one of the finest galleries in Western Canada; Elan Fine Art. Exhibited in 1937 at the annual exhibition of the B.C. Society of Fine Arts, this exceptional piece by an underappreciated artist in the market, is of superb quality. Inspired by the Group of Seven, Rand's depiction of the B.C. landscape is a master class in technique and precision.

The auction also includes two extraordinary works on canvas by internationally renowned Jean Paul Riopelle. Trompette (lot 83) and Sans Titre (lot 100) are representative of Riopelle's mastery of his palette knife technique in the 1960s. Both pieces are a collector's dream for their deliberate spaciousness and visibly freer configurations, in comparison to his earlier mosaic works. We are particularly proud to offer these works following the recent announcement by the newly-formed Jean Paul Riopelle Foundation of their commitment to further national and international awareness about the Artist in advance of his centenary, in 2023.

Waddington's is known for offering works that are fresh to market. Lady with the Red Fan (lot 44) by James Wilson Morrice, direct from the Artist's Estate, is an exemplary work demonstrative of the short window of time from 1895-1915 during which Morrice focused on figure painting. Morrice's portrayal of a Venetian woman is in a class of its own and is one of his best and rare model studies. The Lady has not seen the market since 1943.

Impeccable provenance is a priceless quality for any work of art. Perhaps there is no better example of that than the powerful portrait by Robert Harris of Pîhtokahanapiwiyin, known as Chief Poundmaker (lot 94). 2019 marks a pivotal year as the Government of Canada fully exonerated Chief Poundmaker of his wrongful conviction. This historically-significant work has been in the present owner's family since its acquisition from Harris in the late 19th century.

Waddington's commitment to important contemporary Canadian art is represented in our sourcing of Kent Monkman's, Study for the Academy. One of only two studies by the artist for the major canvas commissioned by the Art Gallery of Ontario, this complex and evocative work comes to market as Monkman prepares to unveil two major works commissioned by the Metropolitan Museum of Art in New York on December 19.

This diverse cross-section includes graphic works, sculpture, works on cloth, as well as ivory miniatures. Powerful pieces created during the classic 1950s period are represented by Standing Woman (lot 51) by Moses Pov, Port Harrison (Inukjuak). Sculpted from locally-sourced, marbled dark green stone characterized by glowing translucent layers, the inset detail of ivory and soap, dynamic depiction of an Inuit woman are all trademarks of works created in Inukjuak during this early period of Inuit art. From the same region, we have included Hunter Throwing a Spear (lot 72) by Akeeaktashuk, one of the earliest internationally-recognized Inuit sculptors. Arguably one of the most powerful works in the auction is Woman with Ulus (lot 76), circa 1950, by an unidentified artist also from Inukjuak. From Cape Dorset (Kinngait) Sheokjuk Oqutaq's Mother and Child, circa 1952 is stunning in its simplicity, with small details such as the traditional tattoos on the mother's face enhancing its beauty.

From one of the most admired Baker Lake (Qamani'tuaq) artists, Jessie Oonark, an untitled, double-sided wallhanging (lot 53). On one side of this double-sided wall hanging, Oonark shows us a traditional summer scene: three Inuit on kayaks with seasonal tents in the background. Minimalistic facial profiles and embroidered lines are major design elements of her work, as are symmetrical compositions. Typical of her oeuvre, these components are also seen on the reverse of this work.

Inuit Art is also renowned for the beautifully simple, yet profound works created by artists like Rankin Inlet (Kangiqtiniq) artist John Tiktak. Like many of his works, his stone sculpture Head (lot 68) commands comparison to the work of Henry Moore. Inspired by traditional stories, Davidialuk Alasua Amittu, Puvirnituq (Povungnituk) captures the importance of family in the delicately rendered Mother with Children (lot 118).

About Waddington'sWaddington's is Canada's most diversified provider of auction and appraisal services.  We specialise in Asian, Canadian, Inuit and Indigenous, International and Contemporary Art, as well as Decorative Arts and Design, Fine Jewellery and Fine Wine & Spirits.