VANCOUVER, May 17, 2019 /CNW/ - Victory Metals ("TSX-V:VMX") ("Victory" or the "Company") is pleased to announce that the Company has entered into an option agreement (the "Agreement") with Ethos Gold ("TSX-V:ECC") ("Ethos"), whereby Ethos can spend $5M to earn an undivided 50% interest in the precious metals rights at the Iron Point Vanadium Project, Nevada (the "Property"). High priority, deep gold/silver drill targets have been proposed by Dr. Quinton Henningh, who will oversee the drilling program at Iron Point as technical advisor to Ethos. 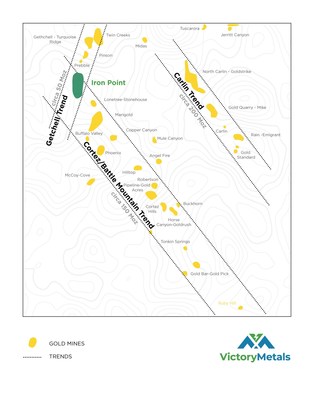 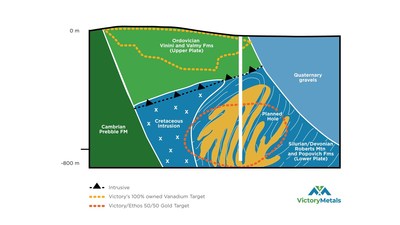 Paul Matysek, Executive Chairman stated: "Iron Point has been the focus of over $20M of historical gold exploration by key operators including Newmont, Chevron Resources, Santa Fe, Kennecott, and Newcrest. Anomalous gold has been found in many places near surface, as well as significant intercepts indictivate of Carlin style gold mineralization. An inquiry into Iron Point's gold potential by Dr. Quinton Henningh just last year sparked the realization of the presence of vanadium, which culminated in the formation of Victory Metals. Dr. Henningh's past work at Iron Point and his conviction on the possible presence of Carlin style deep gold target is truly exciting. With Ethos willing to spend $5M to test deep gold targets, Victory Metals shareholders stand to benefit greatly through the potential discovery of deep Carlin-style gold mineralizaton while focusing Victory's financial and technical resources on the advancement of the near surface vanadium potential.

I would like to reiterate that Victory's primary focus remains on vanadium, with the earn-in Agreement entered into with Ethos clearly defining that Victory has preference on all future mining activities in favor of vanadium."

Craig Roberts, Chairman of Ethos stated: "We are delighted to have come to an agreement with Victory to pursue a drill program targeting Carlin style gold mineralization at Iron Point, and as well to have Dr. Quinton Henningh on board to guide and oversee this drill program. The substantial work at Iron Point and new interpretation by Dr. Henningh has defined this new conceptual Carlin style target and we are very excited to be moving forward with drilling to test this model. We anticipate commencing drilling at Iron Point in the very near future."

As illustrated in Figure 2, the Upper Plate Ordovician Vinini formation overlies the interpreted Silurian/Devonian Roberts Mountain and Popovich formations, separated by a thrust fault dipping at a shallow angle to the west. Subsequent north-south striking normal faulting down-drops the stratigraphy to the east along the range front. Historic drilling has confirmed a recumbent Zed fold parallel and to the west of the range front fault.

This interpretation is based on data from historic drill campaigns dating back to the 1980's, including by Newcrest Mining, Santa Fe Pacific Gold and Aur Resources, and on considerable historic mapping, sampling and analytical work.  Recent improvements in the understanding of the geology and controls of Carlin style deposits has also contributed significantly to the current geologic interpretation and target definition.

A similar model including recumbent Zed folding along a range front fault is the focus of mineralization at Newmont's Twin Creeks mine, located approximately 30 miles north of Iron Point. At Iron Point, anomalous gold has been encountered along the range front fault over a strike length of about 5 km. The area also has associated pathfinder minerals such as mercury, arsenic, and antimony, which often are a distal indicator of gold mineralizing systems, and significant gold has also been sampled in surface trenches, interpreted to be leakage from deeper levels.  While there is considerable historic drilling at Iron Point, very few of these holes penetrated the currently projected Lower Plate target envelope.

Based on this interpretation Dr. Hennigh has located three initial holes which would be drilled vertically to target depths of between 500 and 800 meters (as shown on Figure 2 above).  These holes are planned to penetrate through upper plate stratigraphy to the west of the north south striking normal range front fault and into lower plate stratigraphy.

Ethos can earn a 50% interest in the gold and silver rights at Iron Point by spending a minimum of $5 million over three years, with minimum expenditures of $1.0 million in the first year, $1.5 Million in year two and $2.5 Million in year 3. Following the earn-in, a 50-50 joint venture will be formed between Ethos and Victory.  Victory will maintain 100% title to the Iron Point claims and on completion of its earn-in Ethos would have a contractual right to 50% of any precious metal discovery. The vanadium mineralization is near surface with significant spatial separation from the conceptual deeper precious metals targets. Victory maintains the right to ensure that any precious metals exploration and development plans do not interfere with development of its vanadium project.

Dr. Quinton Hennigh began his career as an economic geologist with large mining companies including Newmont Mining Corp., Newcrest Mining, and Homestake Mining where for fifteen years, he managed exploration projects in North America, Europe, Australia, Asia, and South America. In 2007, he joined the junior gold sector where he has held executive and advisory roles at Gold Canyon Resources, Novo Resources Corporation, Euromax Resources, Prosperity Goldfields and Evolving Gold Corp. He earned a Master of Science degree and a Ph.D in geology and geochemistry from the Colorado School of Mines in 1993 and 1996, respectively.

Victory owns a 100% interest in the Iron Point Vanadium Project, located 22 miles east of Winnemucca, Nevada. The project is located within a few miles of Interstate 80, has high voltage electric power lines running through the project area and a railroad line passing across the northern property boundary. The Company is well financed to advance the project through resource estimation and initial feasibility study work. Victory has a proven capital markets and mining team led by Executive Chairman Paul Matysek. Major shareholders include Casino Gold (46%), and management, directors and founders (27%). Approximately 48% of the Company's issued and outstanding shares are subject to an escrow release over three years

The scientific and technical information in this news release has been review and approved by Calvin R. Herron, P.Geo., who is a Qualified Person as defined by National Instrument 43-101.