VANCOUVER, Dec. 2, 2019 /CNW/ - Turmalina Metals Corp. ("Turmalina" or the "Company") is pleased to announce that its common shares will start trading on the TSX Venture Exchange on Tuesday, December 3rd, 2019 under the symbol TBX. 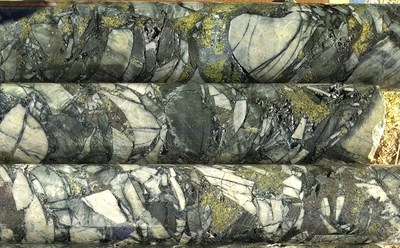 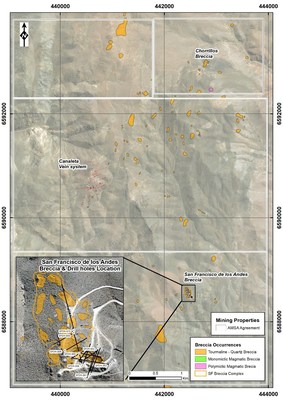 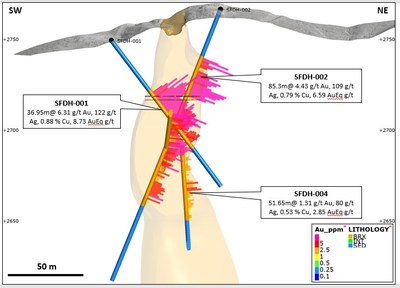 Turmalina is focused on the exploration and development of high-grade gold-bearing tourmaline breccias at San Francisco (the "San Francisco Project"), located in the mining-friendly state of San Juan, Argentina. Turmalina has completed 10 diamond drill holes at the San Francisco de Los Andes breccia pipe at its San Francisco project. Significant intersections are reported in Table 1 below, and include:

Dr. Rohan Wolfe, Chief Executive Officer, states: "The identification and acquisition of these high-grade, gold-bearing tourmaline breccia projects is the result of two years of work and due diligence by our technical team including assessments on dozens of projects throughout South America. Our projects met strict criteria developed by our team of geologists and engineers, a process now validated through recent drilling.

The exceptional drill results at the San Francisco Project highlight the high-grade, gold-rich nature of the San Francisco breccias, returning some of the highest gold-grades recorded for this deposit style. Drilling of the San Francisco de Los Andes breccia pipe shows that the pipe flares outward with increasing depth, a geometry typical of tourmaline breccias that indicates increasing upside at depth. Most significantly the drilled breccia pipe is only one of over 60 breccias mapped to date on our property, with recent sampling by the company identifying several breccias that have returned 1 to 10 g/t gold from surface sampling. We are now keen to accelerate work on the ground."

The recently completed 1570m diamond drill program at the San Francisco project tested the depth extension of the San Francisco de Los Andes breccia pipe with 10 inclined holes drilled across the breccia. These holes intersected broad 40 to 200+ meter wide zones of strong, sulphide-rich breccia mineralisation (Figures 1 to 8) beneath several historic shallow holes drilled by private owners in 1990. The mineralogy and geological setting indicate that only the top of this breccia pipe has been exposed, and there is excellent potential for growth both at depth and laterally.

About the San Francisco Project

The 3404 ha San Francisco project is located in San Juan, Argentina. The project area contains over 60 tourmaline breccia occurrences, several of which have supported small-scale mining. The Company is focused on mapping and sampling the breccias in the project area, and drill testing the highest priority targets.

Turmalina has entered into an agreement to explore the Turmalina copper-gold molybdenum project located in Piura, Peru (the 'Turmalina Project'). The Turmalina Project hosts a cluster of undrilled tourmaline breccias that were historically mined for copper, gold and molybdenum. The Company is currently engaged in the permitting process and plans to commission a 43-101 report and start exploration should the permitting outcome prove to be favorable.

Turmalina is led by an award-winning team of professionals highly experienced in all stages of exploration and mining – from discovery and resource development, through to mining and operations:

Mapping and sampling (rock chips and soils) are ongoing at the San Francisco project with the aim of defining and prioritizing the large number of breccias in the project area. The company is planning a second stage of drilling in early 2020, testing both the San Francisco de Los Andes breccia pipe and several new breccia targets. The company is also consolidating our regional holdings, with the project area being one section of an 80 km long gold-copper mineralised belt.

At the Turmalina Project the Company is conducting social studies, validating mine grades and applying for all required permits before deciding whether to commit to exploration.

As these projects were previously privately held, and as tourmaline breccias have been underexplored by traditional explorers, our portfolio represents the emergence of new projects, new belts and new exploration paradigms in the public market.

Financial Status of the Company

Turmalina is well financed and has a strong cash position. There is no concurrent financing being conducted in conjunction with this listing of the common shares in the capital of the Company (the "Common Shares"), the Company having already raised capital including the most recently conducted private placement which consisted of the issuance of 14 million subscription receipts, which converted into Common Shares on November 28, 2019 on a one for one basis,  at $0.50 per subscription receipt for total gross proceeds of CAD $7 million. At listing, the Company has 48,950,000 Common Shares, 4,225,000 incentive Common Share purchase options and no warrants issued.

Turmalina Metals follows systematic sampling and analytical protocols which exceed industry standards and are summarized below.

All drill holes are HQ diameter diamond core holes.  Drill core is collected at the drill site and transported by vehicle to the Turmalina core logging facility in Villa Nueva, where recovery and RQD (Rock Quality Designation) measurements are taken before the core is photographed and geologically logged. The core is then cut in half with a diamond saw blade with half the sample retained in the core box for future reference and the other half placed into a pre-labelled plastic bag, sealed with a plastic zip tie, and identified with a unique sample number.  The core is typically sampled over a 1 to 2 meter sample interval unless the geologist determines the presence of an important geological contact. The bagged samples are then stored in a secure area pending shipment to the ALS sample preparation facility in Mendoza where they are dried, crushed and pulverized. Following sample preparation the prepared pulps are then sent to the ALS laboratory in Lima for assay. The samples are then analyzed using a 50g aqua regia digest and fire assay-AA finish analysis for gold and four acid digestion with ICP-MS analysis for 53 other elements. Samples with results that exceed maximum detection values for gold are re-analyzed by fire assay with a gravimetric finish and other elements of interest are re-analyzed using precise ore-grade ICP analytical techniques. Turmalina Metals independently inserts certified control standards, coarse field blanks, and duplicates into the sample stream to monitor data quality. These standards are inserted "blindly" to the laboratory in the sample sequence prior to departure from the Turmalina Metals core storage facilities.

The scientific and technical data contained in this news release pertaining to the San Francisco and Turmalina projects has been reviewed and approved by Dr. Rohan Wolfe, Chief Executive Officer, MAIG, who serves as the Qualified Person (QP) under the definition of National Instrument 43-101.

On Behalf of the Company,Dr. Rohan Wolfe, Chief Executive Officer and Director.

About Turmalina Metals and the San Francisco Project:  Turmalina Metals is a TSXV-listed exploration company focused on developing our portfolio of high grade gold-copper-silver-molybdenum projects in South America. Our focus is on tourmaline breccias, a deposit style overlooked by many explorers. Turmalina Metals is led by a team responsible for multiple gold-copper molybdenum discoveries who are highly experienced in this deposit style. Our projects are characterised by open high-grade mineralisation on established mining licenses that present compelling drill targets. The principle project held by Turmalina is the San Francisco project in San Juan, Argentina. For further information on the San Francisco Project, refer to the technical report entitled "NI43-101 Technical Report San Francisco Copper Gold Project, San Juan Province, Argentina" dated November 17, 2019 under the Corporation's profile at www.sedar.com.