SAINT-LAURENT, QC, May 22, 2019 /CNW Telbec/ - On International Day for Biological Diversity, Saint-Laurent unveiled the main features of its biodiversity corridor at a press conference held on Wednesday, May 22, 2019 in front of the Borough's municipal workshops. Situated in the heart of this ambitious project, this location will be the site of the first work operations this year. The corridor will eventually cover approximately 450 hectares, including industrial, commercial and residential sectors. The innovative vision that has inspired it was developed in a master plan devised by the winning team of the national multidisciplinary landscape architecture competition in 2018—a team composed of the following firms: Biodiversité Conseil, civiliti, LAND Italia and Table Architecture. This plan was prepared in collaboration with the Borough's Division de l'environnement et de la protection du territoire. 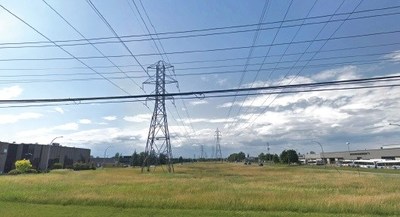 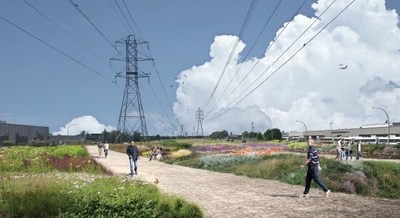 "This long-term project, which will involve a commitment on the part of Saint-Laurent for more than 20 years, is unique and totally revolutionary! The challenge is substantial, as our territory has the largest industrial area in Québec and 82% of its territory is made up of built structures or paved surfaces that are prone to the creation of heat islands. More generally, climate change issues are requiring us to act quickly with innovative solutions. The Saint-Laurent corridor will therefore serve as a laboratory for Montréal, for the province of Québec, for all of Canada and—dare we say—for the entire world! In fact, it is the first project of its kind in an urban environment to combine landscape architecture, urban architecture, environment, ecology, culture, art and social aspects. A real concentration of sustainable development for our Borough, which—I should add—declared itself a sustainable municipal territory in January 2019. This corridor will enable us to transition from a landscape that has been greatly modified by human beings, losing its biodiversity and resilience and even chasing away life, to an abundant and diversified urban nature, connected and linked to human beings."

"With our multidisciplinary team, we are proposing, in this Master Plan, a series of developments that will bring back life in all its forms. For example, at the northernmost part of the corridor, at the end of Boulevard Thimens, we are suggesting the development of a multi-use overpass across the railway. We also imagine an underground wildlife passageway between the woodlands of Parc Marcel-Laurin and those of Cavendish - Raymond-Lasnier - Beaulac - Poirier. The backbone of the biodiversity corridor will consist of revegetating wasteland under the overhead power lines along Cavendish, Poirier and Thimens boulevards. All the developments planned will, first and foremost, serve as new habitats conducive to attracting diversified plant species, birds and pollinating insects."

This first urban biodiversity corridor in Québec will link the existing biodiversity cores in Saint-Laurent, such as Parc Marcel-Laurin woodland and the Cavendish — Raymond-Lasnier — Beaulac — Poirier woodland, Bois-de-Liesse and Bois-de-Saraguay nature parks as well as Ruisseau Brook. All of them have a high ecological potential but are currently part of a very fragmented territory. The corridor needs to restore their connectivity through developments that bring back life in all its forms.

The "backbone" of these developments will consist of the vegetation of wasteland under the overhead power lines along Cavendish, Poirier and Thimens boulevards. The project includes flowering meadows whose colours and textures change with the seasons, in addition to tree-lined strips, new pedestrian trails and upgraded bicycle paths as well as activity or rest areas for Saint-Laurent workers and residents. Ground contours will also introduce relief which, in particular, will break the horizontality and homogeneity of the present landscape and give it a new identity. These contours will also create three-dimensionality, just as the proposed observation towers aim to offer diversified views of the surrounding area.

These developments will, above all, constitute as many new habitats conducive to fostering diversified plant species, birds and pollinating insects. This "backbone" will be created in cooperation with Hydro-Québec, which recently announced its intention to upgrade its power grid between LaSalle and Saint-Laurent.

At the northernmost part of the corridor, at the end of Boulevard Thimens, a multi-use overpass is therefore proposed over the railway. It will provide a real "green bridge" for human and wildlife connectivity, linking the corridor to Bois-de-Liesse and Saraguay nature parks as well as to the Rivière des Prairies. Specialists also imagine an underground wildlife passageway between the woodlands of Parc Marcel-Laurin Park and of Cavendish — Raymond-Lasnier — Beaulac — Poirier.

At the same time, the project is promoting the utilization of roofs, particularly in industrial sectors. These roofs in fact represent rather large areas to be used to support wildlife and plant diversity and also encourage vegetation and its horizontal spread. They also reflect a desire to ultimately involve both the public and private sectors.

And lastly, better rainwater management is being considered to irrigate the entire area of the corridor in a balanced way. This will be done by rain gardens or retention basins that will allow a better absorption and filtration of water. It will also help to help to reduce surface water discharge to the sewer and control heat islands in Saint-Laurent, considered to be the largest on the island of Montréal.

This 180-page document, divided into 12 chapters and appendices, required nearly a year of work by the firms involved—Biodiversity Conseil, civiliti, LAND Italia and Table Architecture—following the national multidisciplinary landscape architecture competition. After characterizing the Saint-Laurent territory, the plan proposes, in particular, a vision, guidelines, a timetable, a map and, above all, developments for the corridor. As such, it constitutes a real decision-making guide for future interventions.

The first phase will begin this year, with work operations around the Borough's municipal workshops, at the intersection of Cavendish and Poirier boulevards. Funding of $485,000 has been earmarked for this first phase, including a $152,000 greening agreement with Hydro-Québec. The Borough has allocated a total of $1,800,000 for the corridor in its three-year capital expenditure program for 2019-2021. It also intends to rely on many partners to achieve the objectives of this plan.

With this "compass", Saint-Laurent is committed to serving the wildlife and plant life and to providing a better quality of life for its residents and workers. This corridor forms a real green, blue and social infrastructure that will enable Saint-Laurent residents to go from place to place, to pursue leisure activities and to live with nature in an urban environment that has been a very paved one at the outset. In short, given the increasing rate of extinction of many species in connection with climate change, this corridor ensures sustainable and consistent resilience.

About the Borough of Saint-Laurent

Having celebrated its 125th anniversary in 2018, Saint-Laurent is one of Montréal's 19 boroughs. Since sustainable development is at the heart of all its decisions, the Borough declared itself a "sustainable municipal territory" on January 8, 2019. Its population of over 100,000 is one of the most multicultural, with 81% of its residents being immigrants or having a parent born in another country. Located at the crossroads of the city's main highways, with great accessibility to public transit, the Borough extends over 42.8 square kilometres. More than 70% of its territory is devoted to industrial and commercial activities. With 4500 companies and 110,000 jobs, it boasts the second largest employment pool on the island of Montréal as well as one of Québec's main industrial and technological hubs. And lastly, with its two libraries, its Centre des loisirs recreation centre, its new Sports Complex, its arena and some 50 parks, Saint-Laurent offers a wide range of services in many fields, such as culture, sports and recreational activities. In this way, the Borough provides a high quality of life for the families and businesses that have settled here.