TORONTO, Oct. 9, 2019 /CNW/ - Sable Resources (TSX.V: SAE) (the "Company" or "Sable") is pleased to announce that the first drill test will begin this week at its 100% owned Vinata Project. The initial program consists of a minimum of 2000m of core drilling to test the outcropping upper level epithermal veins and their projected extension under shallow quaternary gravel. This Phase 1 drill program will be expanded should positive results warrant additional drilling. 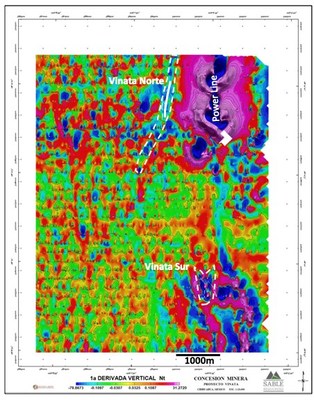 This is the first ever drilling campaign to be performed at the Vinata epithermal project and it is designed to test for high-grade precious metal horizons approximately 200 metres below anomalous surface samples.

Two structurally controlled upper level epithermal anomalous areas have been recognized at the project, Vinata Norte and Vinata Sur. Company geologists identified low-temperature silica textures and hydrothermal breccias combined with anomalous Au, Ag, As, Sb, Hg, Mn, Ba, and Mo values indicating a position in the upper levels of an epithermal system. Results from the program will be released as they are received over the next few months.

As part of the preparation for the upcoming drilling campaign, the company completed 170 km of GroundMag and 8950m of CSAMT surveys distributed in 9 lines, showing coincident geophysical anomalies with the outcropping mineral occurrences.

The GroundMag survey was conducted along East – West lines with 200m of separation. The data was processed and interpreted by a geophysicist consultant in Mexico. The magnetic data at Vinata Norte show the sub-outcropping rhyolitic intrusion as a magnetic high feature clearly contrasting with the surrounding volcanic and sedimentary sequence. The outcropping NNE epithermal vein system, which represents the main target at the project appears coincident with a MagLow running on the western margin of the rhyolite intrusion for over 3 km in strike (Figure 1). Some stratigraphic features are also defined on the Mag sections; including a well-defined MagLow feature (Figure 2) observed at the contact between the rhyolite intrusion and the interpreted limestones that underlie the upper volcanic sequence; this contact constitutes an additional potential target zone. At Vinata Sur the outcropping faults and breccias containing Fe-Mn oxides and associated Mn, Ba, Sb, As, Mo, Zn anomalies, hosted by volcanic rocks, are coincident with an elliptical shape NS oriented MagLow (Figure 1).

"The data provided by the recent geophysical surveys confirm the quality of the targets and is helping us to better define the planning of the upcoming drill test at Vinata" commented Ruben Padilla, Sable's VP of exploration.

ABOUT THE VINATA PROJECTThe Vinata project is located in the Municipality of Chihuahua, State of Chihuahua, Mexico, 50 km south of the city of Chihuahua. The Vinata Project is located along possible extensions of known important mineral belts of northern Mexico including base metal CRD deposits as Santa Eulalia (50km NE of Vinata) and Naica (75km SE of Vinata), and the polymetallic vein system of the new discovery of Sunshine Silver Corp.'s Los Gatos Project, located 75 km SW of Vinata.

Vinata is located on the west edge of a range of hills called the Sierra Pastorias with low relief at an altitude of between 1,600 m and 1,700 m above sea level, and just east of a broad flat valley. The terrain around Vinata has low relief, where two mineralized areas have been identified, Vinata Norte and Vinata Sur, which are separated by and area of approximately 4000m covered by shallow quaternary gravels.

The project was initially identified via stream sediment follow up. At Vinata Norte the system consists of a series of NNE oriented quartz veins that outcrop along a strike length of 1,150m cutting rhyolite tuffs and a volcanic dome that overlies and cut Cretaceous limestone. Quartz vein float extends additional 450m to the southeast and for more than 1000m toward the NW. The system consists of multiple sub-parallel veins and stockwork zones with epithermal textures over a width of between 15m and 170m. Individual veins vary in width from <1m up to about 12m with anomalous Au, Sb, As, and Hg values in rock samples.

Qualified PersonLuis Arteaga M.Sc. P.Geo. Exploration Manager for Sable Resources and the Company's Qualified Person as defined by NI 43-101 has reviewed and approved the technical information in this news release.