TORONTO, Aug. 28, 2019 /CNW/ - Canadian venture capital disbursements for the first half of 2019 set a torrid pace, with 264 financings completed totaling $2.9 billion, according to the Canadian Venture Capital Report by CPE Media Analytics, the data analytic service of CPE Media Inc.

Led by Sonder Canada's $286 million blockbuster deal, large deals continued to play important role in the first half, 2019. 8 deals1 of $50 million or more raised $910 million in aggregate, accounting for 30% of total disbursements. 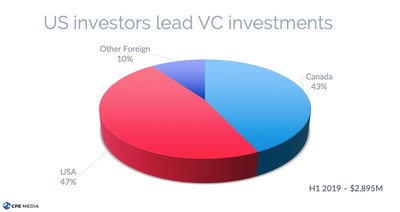 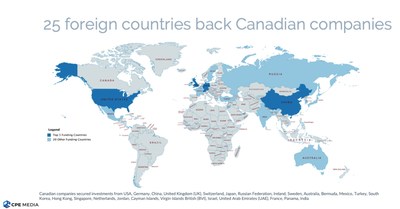 "Barring a total collapse in the second half, Canadian VC disbursements are on track to go past the $5 billion mark for the first time since 2000. As US and foreign investors continue to play a very important role in the Canadian VC ecosystem, CPE Media Analytics is proud to release the first ever analysis sorted by US and foreign investors.   Further detailed analyses can be performed from our sophisticated and advanced all financings database.  Contact us if you would like more granular information," said Ted Liu, President of CPE Media Inc.

CPE Media Analytics, a service of CPE Media Inc., through financings.ca, offers comprehensive data coverage and analysis on venture capital and private equity. We are Canada's only data provider that specifically tracks and provides analysis on investments by investor types and by funding sources. More information:  https://financings.ca