Friday's print in Madison's Lumber Reporter was again US$354 mfbm on benchmark Western Spruce-Pine-Fir KD 2x4 #2&Btr. The price of that construction framing dimension lumber commodity stayed level with the previous week, as did many other standard North American homebuilding wood materials. 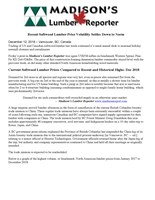 Demand for 2x6 sizes in all species and regions was very hot, even as prices also remained flat from the previous week. A big run on 2x6 at the end of the year is unusual, as this is usually a slower time for lumber manufacturing and for US home building. Such a jump in 2x6 sales is notable because that size is used more often for 2-to-4 structure building (meaning condominiums) as opposed to single-family home building, which uses predominantly 2x4 sizes.

A huge surprise arrived Sunday afternoon in the form of cancellation of the current British Columbia forestry trade mission to China. These regular trade missions have always been extremely successful; within a couple of years following each one, numerous Canadian and BC companies have signed supply agreements for their lumber with companies in China. The trade mission lead by BC Forest Minister Doug Donaldson this year includes approximately 40 company executives, civil servants, and Indigenous leaders on a 10-day sales trip to Korea, Japan, and China.

A BC government press release explained the Province of British Columbia has suspended the China leg of its Asian forestry trade mission due to the international judicial process underway [in Vancouver, BC — ed.]  relating to a senior official at Huawei Technologies. Government officials returned home after the Japan leg of the trip, but industry and company representatives continued to China and held all their meetings as originally intended.

The trade mission is expected to be rescheduled.

Below is a graph of the highest volume, or benchmark, North American lumber prices from January 2017 to December 2018.

It is normal, as a year winds down, that producers and resellers want to deplete their existing inventories to end the year with their supply yards empty. For their part, customers also don't want to be caught at year-end with wood-on-hand, so they order only for immediate needs of existing building projects.

All players want to end each year with as little wood in their possession as possible. The usual seasonal curtailment and closures during the holiday season allows manufacturers and end-users each to examine their inventories against their near-term (spring) plans. Once January starts going, it becomes obvious if US builders will be needing large supplies for the coming building season. Sawmills adjust their production plans accordingly, in an effort to keep supply with demand.

Producers extended their sawmill order files on most items into the week of December 17th, with some dimension widths – as well as recently-hot studs items    – pushing into the first week of January 2019.  — Madison's Lumber Reporter

This means there is little likelihood of prices dropping further before the end of this year. Sawmill order files are already to mid-December or the beginning of January, so producers will simply not book more wood orders for future delivery. They would rather wait until after the New Year, at which time manufacturers will be better able to see where price levels are.

The below table is a comparison of June 2018 and December 2018 prices for benchmark dimension softwood lumber 2x4 prices compared to historical highs of 2004/05: