TORONTO, Jan. 8, 2020 /CNW/ - At a media conference held in the historic King Edward Hotel, Margaret Atwood, on behalf of the 2020 RBC Taylor Prize jury, announced the five finalists for the 20th anniversary, and final, RBC Taylor Prize. The three jurors had previously announced a longlist of twelve titles arising from their evaluations of the record 155 books submitted for this year's Prize.

The shortlist and jury citations for the 2020 RBC Taylor Prize are: 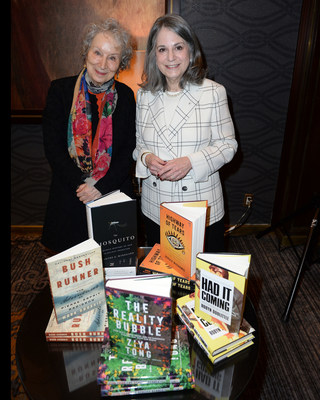 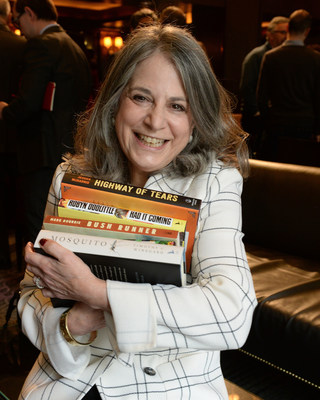 Bush Runner: The Adventures of Pierre-Esprit Radisson, by Mark Bourrie (Biblioasis) Readers of Mark Bourrie's Bush Runner might well wonder if Jonathan Swift at his edgiest has been at work. This over-the-top narrative connects Canadian fur traders with three European royal courts, mixes in Indigenous political intrigues and family alliances among the Five Nations and French settlers, and adds Jesuits, cannibalism, and the Great Fire of London. To top it off, there's the impact of the beaver hat and the buffalo on the entire Western world! In Bourrie's telling, the picaresque Pierre Radisson, a humane con artist of heroic stamina and fluid loyalties, was the fulcrum of four centuries of Canadian centrality in the forging of modern Western civilizations. Who knew?

Had It Coming: What's Fair in the Age of #MeToo? by Robyn Doolittle (Allen Lane)Had It Coming tackles the urgent issues around sexual politics at the heart of contemporary Canadian culture. Robyn Doolittle, well known for her Unfounded series on police handling of sexual assault cases, offers an astute diagnosis of the origin and legacy of #MeToo. With professionalism, balance, and empathy, she seeks to move forward towards a new era of positive change in attitudes towards sexual harassment and assault. Doolittle, while underlining the importance of both due diligence and due process, offers persuasive evidence of a gradual shift in social attitudes, engaging us in a spirited conversation about the complexities of this ongoing social transformation.

Highway of Tears: A True Story of Racism, Indifference and the Pursuit of Justice for Missing and Murdered Indigenous Women and Girls, by Jessica McDiarmid (Doubleday Canada)This riveting exposé of the national scandal of Indigenous women and girls murdered on Highway 16 in north-western British Columbia reads like crime fiction. But this is true crime, and many of the killers have not been brought to justice. McDiarmid's scrupulously documented account tells some of these women's stories and recounts the anguish of their damaged communities. Highway of Tears is a wake-up call for Canada. It challenges not only the police and the government, but all citizens to find a way forward from this legacy of racism, sexism and violence.

The Reality Bubble: Blind Spots, Hidden Truths and the Dangerous Illusions that Shape Our World, by Ziya Tong (Allen Lane)In The Reality Bubble, science broadcaster Zia Tong embarks on a vivid expedition through the science of time, space, dinosaurs, the modern surveillance state, the obscure secrets of supermarket aisles, and almost literal infinity of everyday illusions. We learn that the most shocking revelations are of what our blind spots teach us to miss, and that none of these complex phenomena are a match for her storytelling prowess. Prepare to have most of your bubbles burst!

The Mosquito: A Human History of Our Deadliest Predator, by Timothy C. Winegard (Allen Lane)A fascinating, fact-packed, and timely overview of human history as seen through the lens of the mosquito: carrier of fatal diseases, terminator of communities, arbiter of wars. Through millennia, Winegard argues, the mosquito has been the single most powerful force in determining the fate of humanity, steering the fates of empires, crippling economies, and killing nearly half of humanity along the way. With our former pesticides already useless, we're locked in an escalating battle with these tiny vampires. What are our chances?

Noreen Taylor, founder of the Prize and chair of the Charles Taylor Foundation, spoke at the event and made these comments: "Bravo to our jurors! I am so proud of this, our final shortlist. Charles would be thrilled at the range covered by these books — the hard-hitting, research-heavy investigations of fascinating subjects and the humane treatments of topics that are and will be of keen interest to all Canadians. This is the sort of writing he admired."

Also in attendance was Vijay Parmar, president of RBC PH&N Investment Counsel, who added: "Congratulations to the shortlisted authors of the final RBC Taylor Prize. RBC Wealth Management is proud to have supported Canadian non-fiction literature through the Prize for over a decade. We believe in the power of a good story and the strong group of writers on this year's final shortlist reaffirm that our country's stories continue to be worthy of notice."

Public events already confirmed for the finalists include a free 90-minute Round Table Discussion with the shortlisted authors in the Lakeside Terrace at Harbourfront, hosted by Toronto Star Books Editor, Deborah Dundas, on Thursday February 27, 2020 at 7pm presented by the Toronto International Festival of Authors. There is also the Ben McNally Authors Brunch on Sunday March 1st, at the Omni King Edward Hotel in downtown Toronto (for tickets, please contact Ben McNally Books at 416 361-0032 or visit benmcnallybooks.com).

The RBC Taylor Prize winner will be revealed at a gala luncheon on Monday March 2nd, 2020. The Prize luncheon will once again be held at the Omni King Edward Hotel in downtown Toronto.

About The RBC Taylor PrizeEstablished in 1998 by the trustees of the Charles Taylor Foundation and first awarded in 2000, 2020 marks the 20th anniversary, and final, awarding of the RBC Taylor Prize, which commemorates Charles Taylor's pursuit of excellence in the field of literary non-fiction. Awarded to the author whose book best combines a superb command of the English language, an elegance of style, and a subtlety of thought and perception, the Prize consists of $5,000 for each of the finalists, and a further $25,000 for the winner. All authors are presented with a custom leather-bound version of their shortlisted book at the awards ceremony. All finalists receive promotional support for their nominated titles.

Sharing a commitment to emerging Canadian talent, The Charles Taylor Foundation and RBC will also grant the sixth annual RBC Taylor Prize Emerging Writers Award. Shortly after the announcement of the 2020 Prize, its winner will name their choice of emerging author to receive this $10,000 award.

Continuing that commitment to emerging Canadian talent, we will again present the RBC Taylor Prize Emergent Author Mentorship Program, of nationally selected non-fiction writers from several of the many prestigious writing programs in Canada. The five selected Emergent writers will be paired with a shortlisted author and will travel to Toronto for professional development and mentorship.

The presenting sponsor of the RBC Taylor Prize is RBC Wealth Management. Its media sponsors are The Globe and Mail, Cision, Quill & Quire magazine; its in-kind sponsors are Ben McNally Books, Event Source, TIFA, and the Omni King Edward Hotel. Open Book is a Friend of the Prize.

To download high-resolution images of the shortlisted authors and their book covers please go to: www.rbctaylorprize.ca/2020/rbctp_2020_finalist_covers_and_authors.zip

To download high-resolution images of the trustees and the jury please go to: www.rbctaylorprize.ca/2020/2020_trustees_and_jury.zip

For general information about the Prize please go to: www.rbctaylorprize.ca.