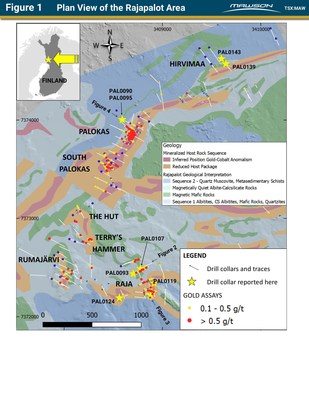 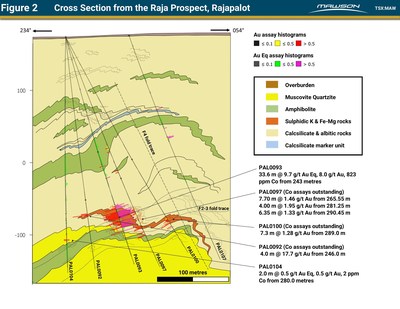 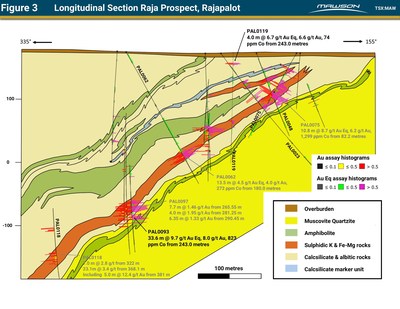 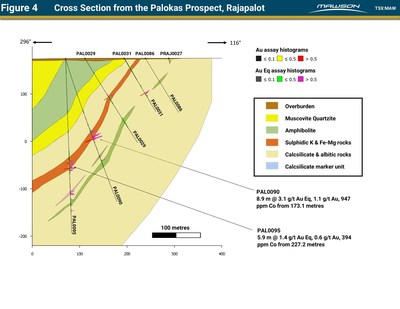 Eight new holes are reported from three prospect areas while cobalt assays are provided from two holes where gold-only values were previously available. All holes except one intersected gold-cobalt mineralization, with results delivering increased confidence and extensions of the cobalt-gold mineralization at Rajapalot. Thirty-six holes from a total of 75 drilled have now been reported from the winter program.

Mr. Hudson, Chairman and CEO, states, "Rajapalot continues to present new and exciting opportunities with every additional result. We continue to be encouraged by the broad uplift in gold-equivalent grades after the addition of cobalt assays, particularly in PAL0093 which assayed 33.6 metres @ 9.7 g/t Au Eq. New targets continue to be generated as evidenced  by the near-surface structural zone of mineralization discovered at Raja with PAL0119 intersecting 4.0 metres @ 6.7 g/t Au Eq. Known mineralization was extended at Palokas, 1.8 kilometres from Raja, where the mineralized position was successfully extended down-plunge by 100 metres. Furthermore, our increased geological knowledge of the mineralized system has facilitated regional targeting with 1-2 kilometre step out holes. With thousands of gold and cobalt assays still in the laboratory, we look forward to announcing data as they become available."

Assays from ten holes are reported: PAL0083, 90, 93 (cobalt only), 95, 104 (cobalt only), 107, 119, 124 (gold only), 139 and 143 from the Raja, Palokas and Hirvimaa prospects. All holes, except PAL0124 (gold-only assays to date) hit anomalous gold and/or cobalt mineralization. A plan view of the drill results and named prospects is provided in Figure 1. Cross and longitudinal sectional views and prospect plan views are included in Figures 2–4. Tables 1–3 include all relevant collar and assay information. Assuming a predominant stratabound control, the true thickness of the mineralized interval is interpreted to be approximately 90% of the sampled thickness. Intersections are reported with a lower cut of 0.5 g/t gold or 0.5 g/t gold equivalent when cobalt assays were available, over 1 metre width and no upper cut-off was applied. The gold equivalent (Au Eq) value was calculated using the following formula: Au Eq g/t = Au g/t + (Co_ppm/481) with assumed prices of Co $88,185/t; and Au $1,320/oz, where 1 g/t Au is equivalent to 0.048 % Co.

Drilling has successfully delineated extensions to known gold areas, including the Raja prospect where gold mineralization has been discovered over 470 metres down plunge. Mineralization is unconstrained down-plunge and partly across strike. The gold mineralization contains sufficient associated sulphide to form an electrical conductor, and VTEM geophysical data indicates a down-plunge extent from surface for over 800 metres. The structurally-controlled mineralized footprint trends approximately 340 degrees and is oblique to the surface orientation of the host strata. Highlights include:

At Palokas (Figures 1 and 4), 2 kilometres NNW of Raja, drilling has extended mineralization for an additional 100 metres with the total down-plunge extent now exceeding 330 metres. New results are:

With increased geological knowledge, the mineralized system has now been targeted at both Hirvimaa, 1 kilometre NE of Palokas (Figure 1) and at Raja East, 1.8 kilometres to the ENE of the Raja prospect.

In addition, 1.8 kilometres to the ENE of Raja prospect, the same interpreted altered host sequence has been discovered in the most recent drilling.

A cobalt geometallurgical study has commenced to investigate the relationships of the cobalt minerals (cobaltite and cobalt pentlandite) to the gold, sulphide and silicate minerals. This is being conducted with the Geological Survey of Finland (GTK) and the Camborne School of Mines (University of Exeter).

Initial interpretations of the pilot hyperspectral study of drill core from the Raja prospect shows significant variation in the compositions of hydrous minerals associated with gold and cobalt mineralization, in particular muscovite species. Research projects in cooperation with the Geological Survey of Finland (GTK) and Oulu University Graduate students will help to define the extent, nature and controls of the hydrothermal alteration responsible for the gold-cobalt mineralization at Rajapalot.

Technical and Environmental BackgroundFive diamond drill rigs from the Arctic Drilling Company OY ("ADC"), Oy Kati Ab ("Kati") and MK Core Drilling OY ("MK"), all with water recirculation and drill cuttings collection systems were used for the drill program. Core diameter is NQ2 (50.7 mm) or WL76 (57.5mm) diameter core. Core recoveries were excellent and average close to 100% in fresh rock. After photographing and logging in Mawson's Rovaniemi facilities, core intervals averaging 1 metre for mineralized samples and 2 metres for barren samples were cut in half at the Geological Survey of Finland (GTK) core facilities in Rovaniemi, Finland. The remaining half core is retained for verification and reference purposes.

Three laboratories are being used to conduct gold and multi-element assay work. Samples were transported by Mawson personnel or commercial transport from site to the CRS Minlab Oy facility in Kempele, Finland, or to the ALSGlobal sample preparation facility at Sodankylä, Finland. Samples submitted to Kempele were prepared and analyzed for gold using the PAL1000 technique which involves grinding the sample in steel pots with abrasive media in the presence of cyanide, followed by measuring the gold in solution with flame AAS equipment. In order to improve the detection limit of the PAL1000 technique from 0.05 g/t Au to 0.01 g/t Au for a 1 kg sample, gold concentration using the DiBK (di-isobutyle ketone) extraction method was also used. Samples transported for gold assay to Sodankylä were analysed using 50 g fire assay and ICP finish method Au-ICP22.

The QA/QC program of Mawson consists of the systematic insertion of certified standards of known gold content, duplicate samples by quartering the core, and blanks the within interpreted mineralized rock. In addition, all three laboratories insert blanks and standards during the analytical process.

The qualified person for Mawson's Finnish projects, Dr. Nick Cook, President for Mawson and a Fellow of the Australasian Institute of Mining Metallurgy has reviewed and verified the contents of this release.

Intersections are reported with a lower cut of 0.5g/t gold over 2 metre lower cut. No upper cut-off was applied.