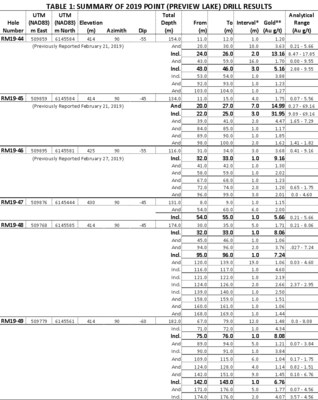 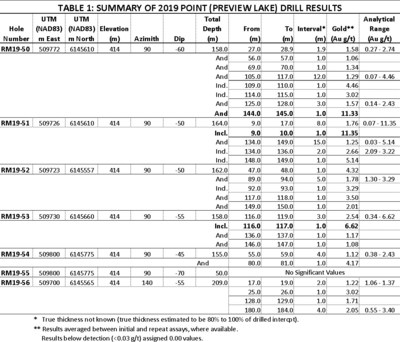 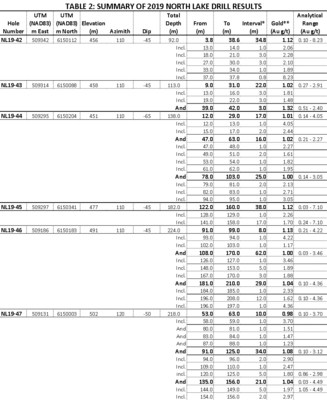 The 2019 drill program was designed to confirm historical drill results for the Point deposit at the Preview Lake Property (previously reported in MAS Gold news releases dated February 21 and 27, 2019), and provide infill and step-out drill intercepts at both Point and North Lake. Drill core from the North Lake drilling will also be used for metallurgical testing. Thirteen holes were drilled at Point (totaling 1,947 m and ten holes at North Lake (totaling 1,594 m).

"We are very pleased with the gold assay results from our 2019 drill program" remarked President and CEO Ron Netolitzky. "This winter's drilling confirms the significant scale potential of the North Lake deposit, supporting our decision to proceed with metallurgical test work and the calculation of a new 43-101 resource. And at Point, both the encouraging results and the new structural data collected are a big step towards developing a better understanding of the gold-mineralized zones in preparation of our next phase of drilling there."

MAS Gold's 2019 drilling at the Preview Lake Property has both successfully duplicated some of the historical drilling and extended the Point deposit mineralized zones down dip to the west. Table 1 highlights significant zones of gold mineralization, often occurring within broader zones of lower grade, in 12 of the 13 core holes drilled in 2019 (see February 27, 2019 MAS Gold news release for drill hole location figure).

Gold mineralization at Point is hosted within multiple, steeply west dipping, north trending irregular shear zones associated with a shallow, southwest plunging synform fold within carbonate-altered, tuffaceous mafic volcanoclastic rocks. Associated minor (<1%) sulphides include disseminated to blebby pyrite, pyrrhotite and trace galena, sphalerite and chalcopyrite. Gold also occurs in narrow quartz veins. Historical work by Saskatchewan Mining Development Corporation proposed the sub-parallel Z1, Z2 and Z3 shears in holes RM86-21, RM87-31 and RM89-35 (UTM Section 6145585 metres North) extending roughly 75 metres down dip from surface. These zones were repeated in MAS Gold's drill holes RM19-44 and RM19-45 and are interpreted to extend a further 35 metres down dip as seen in hole RM19-48 collared to the west. Hole RM19-56, drilled off section at azimuth 140o, is interpreted to have intersected the down plunge extension of the synform hosted portion of the Z1 zone between 180 and 184 metres core length (2.05 g Au/t over 4.0 m).

The 2019 North Lake drill results confirm the presence of multiple, wide zones of near surface and continuous low-grade gold mineralization as shown in Table 2 and Figure 1 following. The North Lake deposit comprises broad, moderately northwest dipping zones of sheeted hematitic quartz veinlets within a competent felsite unit. Minor pyrite and chlorite vein selvages are associated with the auriferous zones, which also exhibit fine-grained visible gold. These gold zones range from five to greater than 100 metres in thickness and extend to over 700 metres in length.

The 2019 drilling successfully fulfilled the objective of providing infill and down dip extensions of historical results.

Historical work at both the Point and North Lake deposits during the 1980's included significant drill programs by SMDC of 3,897 metres (43 NQ holes) and by Radcliffe Resources Ltd. of 5,723 metres (17 AX & 25 BDBGM holes), respectively. At North Lake, more than 400 metres of saw-cut surface channel samples were also collected. The Point drill core was destroyed in a forest fire in the 1990's, although two core holes (RM87-31 & RM89-37) are preserved in La Ronge at the Saskatchewan Geological Survey's Precambrian Geological Laboratory. The entire North Lake core record is well preserved in a metal clad core shed on the North Lake Property. Complete assessment work records, including analytical certificates, drill logs and drill sections are available for both the North Lake and Point properties, and although drill collar locations are based on historical exploration mine grids, these have been subsequently field checked and tied into the UTM co-ordinate system.

All drill core was logged (geological and geotechnical), tagged, photographed, sawn and stored in a secure facility on the property. For the 2019 drilling, the entire lengths of most holes were sampled at consistent 1.0 metre lengths. These metre-long drill intersections are reported from drill hole lengths; true widths of gold-mineralized zones vary between 70% and 100% of reported drill intersection lengths due to variations in drill orientations. Down hole orientation surveys were performed for the current drill program. All new core is oriented using a Reflex ACTIII orientation tool on the drill. With less reliable downhole survey data available for historical drill holes, there is uncertainty regarding their relative end of hole positions.

Half of all core has been retained for permanent record. Selected core samples were recorded, checked and sealed in individual plastic bags, then put in rice bags for shipment by courier from La Ronge to TSL Laboratories Inc. ("TSL Labs") in Saskatoon, SK for analysis. Core samples were crushed to a minimum 70% passing through a 10-mesh sieve with an approximately 250 gram representative split sample obtained from the entire reject sample using a riffler. The split samples were pulverized to a minimum 95% passing through a 150-mesh sieve. Due to the presence of coarse gold, the pulverizer was cleaned using a sand wash after every sample. Gold analyses were by Fire Assay/Gravimetric methods using a 1 Assay Ton charge. The gold detection limit for this assay method is 0.03 g/t. Reject pulps are saved and stored for potential, future metallic screen or other analyses.

Standard samples were inserted into the sample stream at the time of logging using CDN Resource Laboratories Ltd. standard CDN-GS-1P5R (1.81 g Au /t ±0.14 g Au /t). TSL Labs in-house standards were inserted approximately every 20 samples, as well as three pulp duplicates for Fire Assay/Gravimetric work. Standards are sourced from CDN Resource Laboratories Ltd., OREAS or Rocklabs Reference Materials. MAS Gold's quality assurance and quality control procedures include the systematic insertion of standards into the sample string of all holes, except RM19-44, -45, -46, -47 and -51 when standards were unavailable on time due to a shipping error. All QA/QC results were within expectations.

David Tupper, P. Geo. is a qualified person ("QP") within the context of National Instrument 43-101 and has prepared, read and approved the technical aspects of this news release.

On Behalf of the Board of Directors of MAS Gold Corp. Ronald K. NetolitzkyPresident & CEO

Caution Regarding Forward-Looking Information and Statements:

This news release includes certain forward-looking statements or information that could cause actual results to differ materially from MAS Gold's plans or expectations. These include risks relating to the actual results of current exploration activities, fluctuating gold prices, possibility of equipment breakdowns and delays, cost overruns, availability of capital and financing and general economic, market or business conditions. All statements other than statements of historical fact included in this release, including, without limitation, statements regarding any updated technical report, are forward-looking statements that involve various risks and uncertainties. There can be no assurance that such statements will prove to be accurate and actual results and future events could differ materially from those anticipated in such statements.