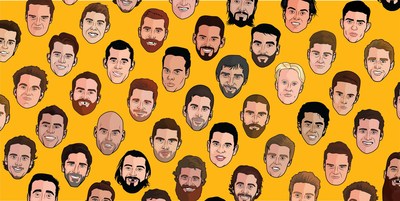 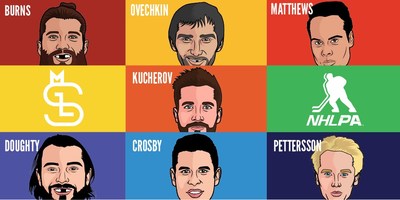 The agreement with the NHLPA follows on the heels of Major League Socks' successful retail launch with the NHL Alumni Association earlier this year. The NHLPA Line will showcase some of hockey's most recognizable players on pairs of Major League Socks' fashion-forward and colourful socks. The artistic caricatures of players on the designs (www.majorleaguesocks.com/collections/NHLPA) allow fans to show support for their favourite players from the boardroom to the living room, and everywhere in-between.

"This fresh lineup of the game's top superstars is what the fans have been asking us for, and we're thrilled today to announce that we're ready to roll them out to those fans all across North America," said Thomas McCole, Major League Socks co-founder.

"We're pleased to welcome Major League Socks to the family of NHLPA-licensed suppliers," said Martin McQuaig, Senior Manager - Licensing, NHLPA. "The player caricatures look great, and we know they'll be popular with fans of all ages."

The first series of NHLPA player socks feature 49 superstars from all the top teams, including superstars such as Connor McDavid, Elias Pettersson, Alex Ovechkin and Auston Matthews. The socks are packaged in a collectible display tray, featuring the full-colour original caricatures.

Fans can visit www.majorleaguesocks.com to browse and purchase the full collection of 49 NHLPA stars. Products are available at select Sport Chek locations, the NHL Store, the Hockey Hall of Fame's Spirit of Hockey gift shop and Fanatics.

About Major League SocksMajor League Socks is home to the world's largest collection of socks featuring the likeness of professional hockey players. Established in 2015, we celebrate fandom like never before. From weddings to the workplace, bars to bar mitzvahs, and running 10K's to game days, our unique products give you the ability to support your team no matter where you are. Visit us at majorleaguesocks.com, or like and follow us on Facebook, Twitter, and Instagram.

About the National Hockey League Players' AssociationThe National Hockey League Players' Association (NHLPA), established in 1967, is a labour organization whose members are the players in the National Hockey League (NHL). The NHLPA works on behalf of the players in varied disciplines such as labour relations, product licensing, marketing, international hockey and community relations, all in furtherance of its efforts to promote its members and the game of hockey. In 1999, the NHLPA launched the Goals & Dreams fund as a way for the players to give something back to the game they love. Over the past 19 years, more than 80,000 deserving children in 34 countries have benefited from the players' donations of hockey equipment. NHLPA Goals & Dreams has donated more than $24 million to grassroots hockey programs, making it the largest program of its kind. For more information on the NHLPA, please visit www.nhlpa.com.

NHLPA, National Hockey League Players' Association and the NHLPA logo are trademarks of the NHLPA and are used under license. © NHLPA. All Rights Reserved.