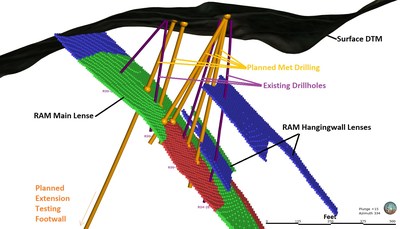 Most of the core will be drilled by large diameter PQ size to enable sufficient ore samples for comminution and flotation testing.  In addition, HQ core will extend several holes to test for the existence of footwall lenses at depth, which is present in the southern areas of the Idaho Cobalt Belt.

In addition, Jervois is planning an infill drilling programme of up to 3,400 metres of HQ size diamond core drilling, which will follow on from the metallurgical drilling.  This programme will target the existing resource model within initial ore source areas envisaged in the first years of the mining at ICO to increase the level of geological confidence from such areas.

Following the completion of the drilling programme, anticipated end of October 2019, an updated resource model will be produced to feed into mine planning for the FS, which is due for completion and release at end of Q1 2020.

The technical content of this news release has been reviewed and approved by Dean Besserer, P.Geol., the Technical Advisor of the Company and a Qualified Person as defined by National Instrument 43-101

This news release may contain certain "Forward-Looking Statements" within the meaning of the United States Private Securities Litigation Reform Act of 1995 and applicable Canadian securities laws. When used in this news release, the words "anticipate", "believe", "estimate", "expect", "target, "plan", "forecast", "may", "schedule" and other similar words or expressions identify forward-looking statements or information. These forward-looking statements or information may relate to drilling  work to be undertaken on the ICO, the reliability of third party information, and certain other factors or information. Such statements represent the Company's current views with respect to future events and are necessarily based upon a number of assumptions and estimates that, while considered reasonable by the Company, are inherently subject to significant business, economic, competitive, political and social risks, contingencies and uncertainties. Many factors, both known and unknown, could cause results, performance or achievements to be materially different from the results, performance or achievements that are or may be expressed or implied by such forward-looking statements. The Company does not intend, and does not assume any obligation, to update these forward-looking statements or information to reflect changes in assumptions or changes in circumstances or any other events affections such statements and information other than as required by applicable laws, rules and regulations.