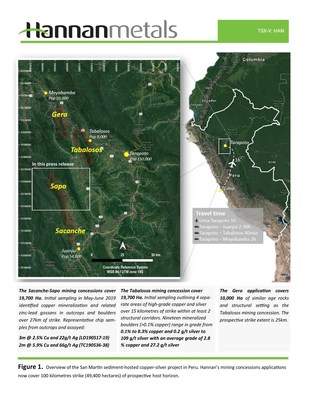 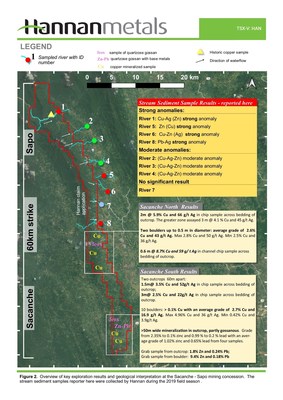 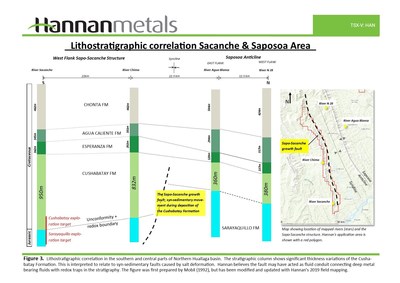 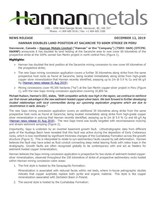 Michael Hudson, Hannan's CEO, states, "With competitor activity now high in the region, we continue to reinforce our first-mover advantage in the new sediment-hosted copper-silver basin. We look forward to further developing trusted relationships with local communities during our upcoming exploration programs which are due to recommence in early January."

Importantly, Sapo is underlain by an inverted basement growth fault.  Lithostratigraphic data from different parts of the Huallaga Basin have revealed that this fault was active during the deposition of Early Cretaceous rocks, which is now manifested by significant thickness changes of the Cushabatay Formation across the growth structure (Figure 3).  This is interpreted to relate to syn-sedimentary faults caused by salt deformation.  Hannan believes the fault may have acted as fluid conduit connecting deep metal bearing fluids with redox traps in the stratigraphy. Growth faults are often recognized globally to be contemporary with and act as feeders for sediment-hosted copper mineralization.

Hannan Metals Limited is a natural resources and exploration company developing sustainable and ethical resources of metal needed to meet the transition to a low carbon economy. Over the last decade, the team behind Hannan has forged a long and successful record of discovering, financing and advancing mineral projects in Europe and Peru.

All sampling by Hannan has been carried out by trained personnel. The samples were transported from the field to the town of Tarapoto by Hannan's staff. From there, the samples were transported by commercial bus to the ALS facility in Lima, where the samples were prepared. Stream sediment samples were dried and sieved to -180 microns (80 mesh) and analyzed with an aqua regia digest followed by ICP-MS (ALS code ME-MS41). Hannan did not insert any certified standard into the batch, instead relied upon certified standards inserted by ALS. The ALS laboratory in Lima is accredited under ISO/IEC 17025:2005 and run internal sample preparation and analytical quality control, round robin and proficiency tests.