VANCOUVER, Jan. 14, 2020 /CNW/ - Group Eleven Resources Corp. (TSX.V: ZNG; OTC: GRLVF; FRA: 3GE) ("Group Eleven" or the "Company") is pleased to announce that recent drilling at its 60%-interest Ballinalack Zinc Project ("Ballinalack") in the Republic of Ireland, has intersected a sulphide-bearing mafic dyke with anomalous platinum-group metals ("PGMs", including platinum, palladium, rhodium) and gold, along with highly anomalous copper, nickel and cobalt. The dyke appears to laterally extend over several kilometres. Previous operators at Ballinalack did not assay for PGMs and to management's knowledge, PGM exploration in the Republic of Ireland has never been conducted. Group Eleven views the above results as a potential 'sweetener' to Ballinalack, which remains primarily a zinc-focussed project. Zinc-lead results from the recently completed Ballinalack drill program are expected over the next few weeks. 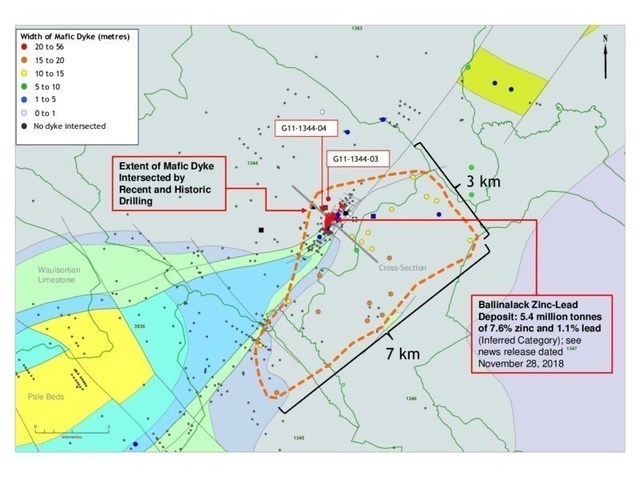 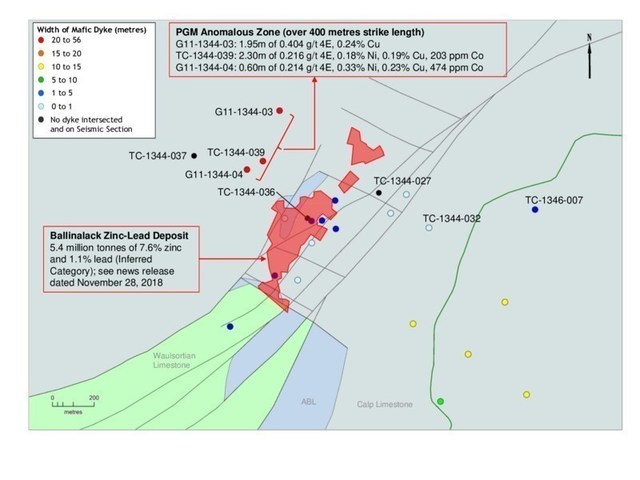 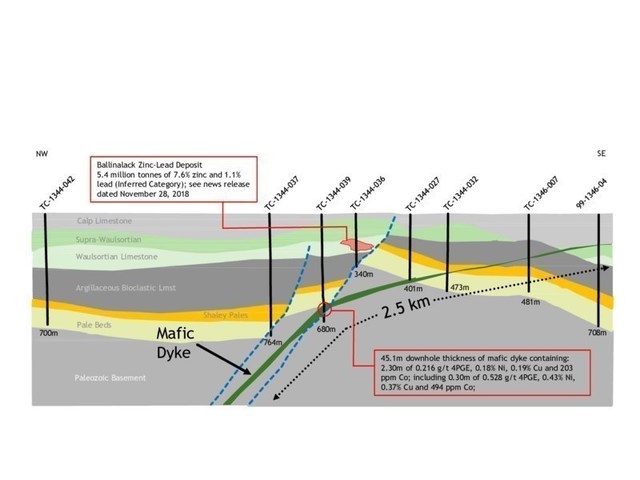 "The above results were unexpected and a bit out of left field, given our exploration efforts were fully geared towards zinc," stated Bart Jaworski, CEO. "Despite being a surprise, these anomalous PGM results certainly add to the Ballinalack story. We intend to do more work on PGMs in the future as we remain focussed on exploring for zinc and expanding the existing Ballinalack zinc deposit1."

Group Eleven drilled two diamond drill holes (G11-1344-03 and G11-1344-04) beneath the existing Ballinalack zinc-lead deposit. In addition to testing the Pale Beds for zinc mineralization (to be reported in the next few weeks), the holes intersected a mafic dyke with down-hole thicknesses (true widths unknown) of 29 metres and 56 metres, respectively. The latter intercept represents the thickest known dyke intercept on the property. Sulphide mineralization was observed at the base of the dyke, which in turn led Group Eleven staff to analyse for PGMs a nearby historic hole (TC-1344-039, drilled by Teck Resources Ltd. in 2010) which also exhibited similar material. Key information is summarized below:

All drilling at Ballinalack as part of the current exploration phase announced on August 6th, 2019 has now been completed. Zinc-focussed assays and interpretation are nearing completion. Group Eleven aims to provide a full update on these results over the next few weeks.

About the Ballinalack Project

The Ballinalack project is a joint venture between Group Eleven (60% interest) and Shenzhen Zhongjin Lingnan Nonfemet Company Limited (40% interest), one of the largest zinc producers in China, and is located in Counties Westmeath and Longford, north-east Ireland. The property contains what is believed by the Company to be the third largest undeveloped zinc-lead occurrence in Ireland and is located approximately 50 kilometres west from the currently producing Navan Zinc-Lead Mine (Boliden AB).

Technical information in this news release has been approved by David Furlong, P.Geo., Chief Operating Officer, and 'Qualified Person' as defined under Canadian National Instrument 43-101.

Additional information about the Company is available at www.groupelevenresources.com.

ON BEHALF OF THE BOARD OF DIRECTORSBart Jaworski, P.Geo.Chief Executive Officer

This press release contains forward-looking statements within the meaning of applicable securities legislation. Such statements include, without limitation, statements regarding the future results of operations, performance and achievements of the Company, including the timing, content, cost and results of proposed work programs, the discovery and delineation of mineral deposits/resources/ reserves and geological interpretations. Although the Company believes that such statements are reasonable, it can give no assurance that such expectations will prove to be correct. Forward-looking statements are typically identified by words such as: believe, expect, anticipate, intend, estimate, postulate and similar expressions, or are those, which, by their nature, refer to future events. The Company cautions investors that any forward-looking statements by the Company are not guarantees of future results or performance, and that actual results may differ materially from those in forward looking statements as a result of various factors, including, but not limited to, variations in the nature, quality and quantity of any mineral deposits that may be located. All of the Company's public disclosure filings may be accessed via www.sedar.com and readers are urged to review these materials, including the technical reports filed with respect to the Company's mineral properties.