PHILADELPHIA, Sept. 26, 2018 /CNW/ -- Last night #FourSeasonsPopDown Philadelphia, the second in a global series of immersive experiences by the world's leading hospitality company, culminated in a mesmerizing evening of surrealism and enchantment on September 25th at BOK in the city's Passyunk neighbourhood. Ahead of the opening of the highly anticipated Four Seasons Hotel Philadelphia at Comcast Center in spring 2019, Four Seasons transformed the South Philadelphia rooftop venue into a surreal garden experience, paying homage to The City of Brotherly Love in a showcase of artistry and imagination. 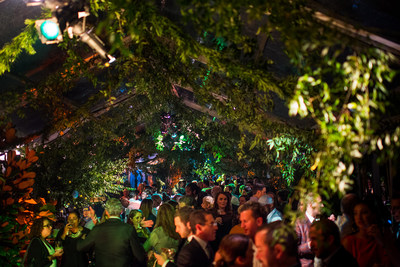 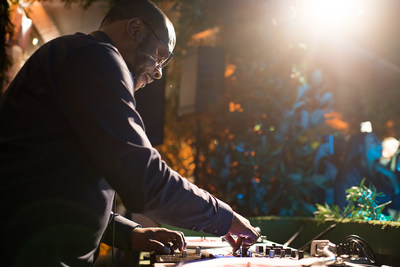 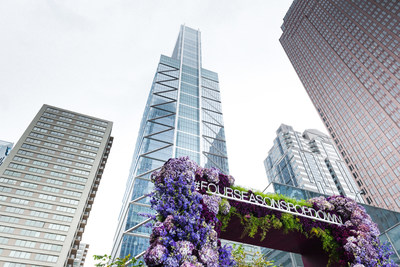 The one night-only-event followed four interactive floral art installations created by renowned celebrity florist Jeff Leatham that popped down around the city, to the delight of locals and visitors to the city, lighting up social media with the colourful photo opportunities.

As guests arrived at BOK, a former high school, they were greeted by colourful bursts of Leatham's florals, which set the stage for the captivating surreal garden that awaited on BOK's rooftop. Atop the city, surrounded by panoramic views, Four Seasons artisans showcased their craft, serving a menu of out-of-the-box culinary creations, mixology and sweet treats. The international roster of Four Seasons talent included artisans who will make up the permanent team at Four Seasons Hotel Philadelphia at Comcast Center, including Michelin-starred Chef Jean-Georges Vongerichten, celebrated local Chef Greg Vernick, Hotel Executive Chef Maxime Michaud, and celebrity florist Jeff Leatham, who was recently announced as Artistic Director of the upcoming Hotel.

The unexpected rooftop venue was completely transformed from top to bottom, unveiling a lush garden that greeted guests with new surprises at every turn while local Philadelphia icon DJ Jazzy Jeff curated the evening's soundtrack.  Guests mingled with larger than life moss creatures while sampling the night's delicacies, taking in the Philadelphia skyline, growing by the day with the silhouette of the new Four Seasons Hotel Philadelphia at Comcast Center, opening in 2019.

Additional event and installation images can be found HERE.

Four Seasons Pop Down Philadelphia is the second in an innovative series of immersive global events in unexpected locations, each with unique themes brought to life by a selected team of Four Seasons artists and visionaries from around the world.  Four Seasons Pop Down was launched in Toronto in 2017, followed by Philadelphia in September 2018 with subsequent Pop Downs planned in Miami in December 2018 and Hong Kong in March 2019.

For the latest news on Four Seasons Pop Down events, themes and locations, follow @FourSeasons #FourSeasonsPopDown and visit press.fourseasons.com.

Founded in 1960, Four Seasons Hotels and Resorts is dedicated to perfecting the travel experience through continual innovation and the highest standards of hospitality. Currently operating 110 hotels and resorts, and 39 residential properties in major city centres and resort destinations in 46 countries, and with more than 50 projects under planning or development, Four Seasons consistently ranks among the world's best hotels and most prestigious brands in reader polls, traveller reviews and industry awards. For more information and reservations, visit fourseasons.com. For the latest news, visit press.fourseasons.com and follow @FourSeasonsPR on Twitter.