- ESV Resources to change name to Denarius Silver Corp. as it turns attention to becoming a silver focused company, looking to offer shareholders exposure and leverage to the precious metal

- Guia Antigua Project, a past silver producer adjacent to Gran Colombia Gold's flagship Segovia mine (TSX:GCM), has previously produced over 78,000 oz of silver at an average grade of 404 g/t silver

- Zancudo Project, a past gold-silver mine, previously produced over 1.5 million oz of gold at an average grade of 14.6 g/t gold and 108 g/t silver, to be acquired from Gran Colombia Gold which is currently under option to IAMGOLD (TSX:IMG)

VANCOUVER, Sept. 24, 2020 /CNW/ - ESV Resources Ltd. (the "Company") (TSXV: ESV.H) announces that it will engage in the exploration, development and mining of silver-gold projects and it has entered into letters of intent (collectively, the "LOIs"), each dated effective September 23, 2020, with Gran Colombia Gold Corp. (TSX:GCM) ("Gran Colombia") and 1255269 B.C. Ltd. (the "Guia Antigua Vendor") to acquire its first two projects, both located in historic mining districts in Colombia.  The LOIs outline the general terms and conditions by which the Company will concurrently acquire (collectively, the "Transaction") the Zancudo Project from Gran Colombia, as well as all of the outstanding share capital of the Guia Antigua Vendor which controls the Guia Antigua Project. 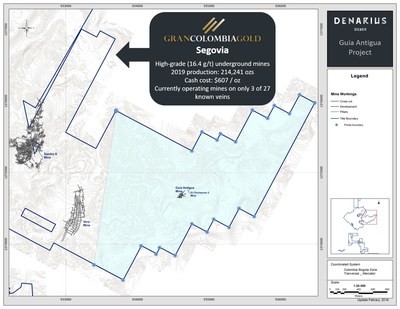 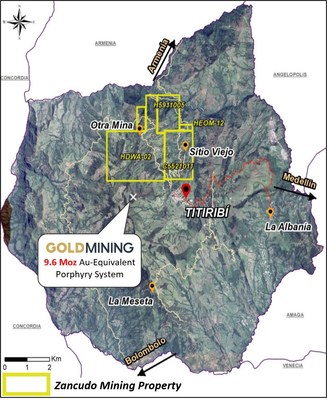 The Guia Antigua Project encompasses the exploration, development and mining rights to a 386-hectare area located in the eastern part of Gran Colombia's Segovia mining title focused on the Guía Antigua vein which falls outside the areas associated with Gran Colombia's mining operations and exploration activities. The Guia Antigua Project is located 130 kilometers northeast of Medellin (227 kilometers by road) in the Segovia-Remedios mining district, Department of Antioquia, north-western Colombia and is about five kilometers east of the town and mining centre of Segovia.

The Guía Antigua vein is a high-grade silver-gold vein which is oriented  sub-parallel  to  an  aphanitic  dyke  hanging  wall  and  highly  weathered  foliated  metamorphic  footwall within the Upper Jurassic Segovia Batholith. There is a systematic increase in the silver grade and the silver-gold ratio from west to east in the Segovia mining title. From 2014 to 2016, Sociedad Guias Gold carried out systematic channel sampling of the Guia Antigua Mine. A short drill program of 1,753.9 m was carried out in 2018-19.

The Zancudo Project consists of a 1,052-hectare mining concession area located in the Titiribi mining district in Antioquia, Colombia, about 27 kilometers southwest of Medellin. Zancudo comprises a historical gold mine (the Independencia Mine) located in the Middle Cauca Gold Belt. The estimated total historical production dating back to 1793 is 1.5 to 2.0 Mozs of gold equivalent with recovered grades of 14.6 g/t Au and 108 g/t Ag. The Independencia Mine exploited an epithermal intermediate sulphidation type vein system over 3.5 kilometers strike length and to a depth of approximately 300 meters.

Gran Colombia acquired Zancudo in 2010 and completed a 14,000 meter drilling program in 2011 and 2012. In March 2017, Gran Colombia signed an option agreement with IAMGOLD Corp. ("IAMGOLD") for the exploration and potential purchase of an interest by IAMGOLD in Zancudo. Under the agreement, IAMGOLD has been granted an option to acquire an initial undivided 65% interest (the "First Option") in Zancudo by incurring an aggregate of US$10 million of mineral exploration expenditures over a six-year period, subject to meeting specified annual work commitments during this period. From 2017 through 2019, IAMGOLD has completed a total of approximately 16,224 meters of drilling at Zancudo and has incurred over US$4 million of its exploration commitment. However, due to COVID-19, IAMGOLD has suspended its drilling program thus far in 2020. IAMGOLD has also been granted an additional option (the "Second Option") to acquire a further 5% undivided interest, for an aggregate 70% undivided interest in Zancudo, by completing a feasibility study within three years after exercising the First Option. Upon exercise of the First Option or the Second Option, as the case may be, the parties will form a joint venture to hold Zancudo, to advance the exploration and, if feasible, to advance the development and mining of any commercially exploitable ore body.

In conjunction with its exploration campaign, IAMGOLD has implemented a number of ESG initiatives in the local community at Zancudo, including a beekeeping project focused on providing training to local beekeepers, improving efficiency in honey production and marketing support.

As a condition to completing the Transaction, the parties intend to complete a non-brokered private placement financing (the "Concurrent Financing") to raise up to $7,000,000 through the issuance of up to 15,555,000 subscription receipts of the Guia Antigua Vendor at a price of $0.45 per subscription receipt.  It is anticipated that Gran Colombia will subscribe for $3,000,000 of the Concurrent Financing.

Following the closing of the Transaction and the Concurrent Financing, the Company expects to have approximately 88,199,912 common shares issued and outstanding.

Board of Directors and Management Changes

On completion of the Transaction, the Company's board of directors and management team will be reconstituted to consist of the following individuals:

Mr. Couch is a financial services executive with extensive experience in the natural resources sector having advised and raised capital for clients globally, with a particular focus in emerging markets. Currently Mr. Couch is working with Orion Resource Partners, a mining focused private equity firm. Orion has over $6 billion under management, and specializes in institutional metals and mining investment strategies in the base and precious metals space. Mr. Couch has worked with several financial services firms in Europe, including being Head of Investment Banking Europe for BMO Capital Markets (Bank of Montreal). Mr. Couch has also had senior investment banking roles with Credit Suisse Europe and Citigroup (Solomon Brothers). He has public board experience in both the London Stock Exchange and Toronto Exchange, and has advised several governments on their natural resources capital requirements.. He holds both an undergraduate business degree and a law degree.

Mr. Sparkes is an accomplished business leader and entrepreneur with over twenty five years of experience in media, finance, capital markets and Canada's political arena. He spent a decade as a leader in the broadcast and media industry as CTVglobemedia's Executive Vice President, Corporate Affairs. He also held senior positions in public service, including with the Government of Canada as Director of Operations to Prime Minister, Jean Chretien, and as a senior aide to two Premiers of Newfoundland and Labrador.  Mr. Sparkes was a co-founder and executive vice chairman at Difference Capital Financial and serves on a number of private and public boards. He is currently President of Otterbury Holdings Inc., and is an advisor and deal maker for growth companies in the private and public markets.

Mr. Iacono is an entrepreneur and business person who has either founded or been the head of several different companies operating in the mining and natural resources sector. He is currently the Executive Chairman of Gran Colombia Gold Corp., Executive Chairman and Chief Executive Officer of Caldas Gold Corp. (a subsidiary of Gran Colombia Gold Corp.), Chief Executive Officer and Executive Director at CruzSur Energy Corp. and Chairman of Western Atlas Resources, Inc. Mr. Iacono is also on the board of Pacific Infrastructure Ventures, Inc. and Sociedad Portuaria Puerto Bahia SA and Member of Blue Pacific Investments Group Ltd.

Mr. Paredes-Arenas currently serves as Chief Executive Officer of Gran Colombia Gold Corp. and brings over 20 years of corporate leadership and operations management experience in the resource sector in Latin America.  Before becoming an independent consultant on energy and environmental project development, Mr. Paredes held several roles with within Petroleos de Venezuela (PDVSA).  He was responsible for regional planning of investments and social development for Eastern Venezuela, and was Managing Director and a Board Member of Maraven S.A. (an affiliate of PDVSA), with responsibility for the construction and commissioning of the Cardon Refinery Conversion Project in Venezuela, a US$2.6 billion project.  He was also General Manager of its Production Operations Division, with 5,000 employees and oil production of 800,000 barrels per day.  Mr. Paredes holds Bachelor of Science in Mechanical Engineering and Master of Economic Analysis and Financial Economics degrees.

In addition to the above appointees to the board and management, Mr. Augusto Garcia will be appointed President of the Company's Colombian subsidiary. Mr. Garcia is a Colombian lawyer with more than 40 years experience in both the private and public sector. He has had multiple managerial positions, including Deputy Minister of Mines of Colombia, Deputy of Cormagdalena, Deputy Ambassador for Colombia in Spain, Vice President of Corporacion Financiera del Norte, and President of Carbones Colombianos del Cerrejón.

The Company is currently evaluating candidates for the roles of Chief Executive Officer and Chief Financial Officer.

Trading in the common shares of the Company will remain halted pending further filings with the Exchange.

The scientific and technical data contained in this press release was reviewed and prepared under the supervision of Dr. Stewart D. Redwood, BSc(Hons), PhD, FIMMM, FGS, Consulting Geologist, is a Qualified Person under National Instrument 43-101 Standards of Disclosure for Mineral Projects. Dr. Redwood has reviewed and approved the data related to the exploration information disclosed in this news release.

On Behalf of the Board of Directors,

Completion of the Transaction is subject to a number of conditions, including but not limited to Exchange acceptance and shareholder approval, if applicable. The Transaction and Concurrent Financing cannot be completed until such approvals are obtained. There can be no assurance that the Transaction will be completed as proposed or at all.

Investors are cautioned that, except as disclosed in the filing statement to be prepared in connection with the Transaction, any information released or received with respect to the Transaction may not be accurate or complete and should not be relied upon.  Trading in the securities of the Company should be considered highly speculative.