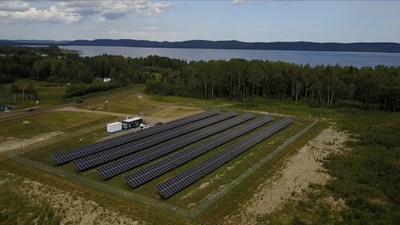 This groundbreaking and Indigenous-led micro grid project utilizes ground-mounted solar panels, lithium-ion batteries, and a sophisticated control system to help the community offset its diesel usage. A micro grid controller integrates the clean, renewable energy from over 1,000 solar panels and over 80 battery modules with the existing community distribution system. The controller will balance generation and energy storage to reduce diesel use by as much as 30 per cent. ALLTRADE was chosen as the general contractor for this project, which involved extensive integration with the existing distributor, Hydro One, and battery and controller supplier, ABB.

With the project now online, KZA's development corporation, Ma'iingan Development Inc. (MDL), will be responsible for the operations and maintenance to deliver clean energy to their own community. This is a significant step towards KZA's long-term vision for energy sustainability.

Located on the western shore of Lake Nipigon, KZA has an on-reserve population of about 300 people who currently rely on diesel generators to provide all of their electricity. It is one of four remote First Nation communities in Ontario that cannot currently be connected economically to the provincial grid.

OPG is the largest electricity generator in the province, providing almost half the power Ontarians rely on every day. It is also one of the most diverse generators in North America with expertise in nuclear, hydro, biomass, solar, and gas.

"In the last few weeks as we went into full operations we have already reduced over 12,000 litres of diesel with clean, renewable solar power. A true Gift from the Creator," said Chief Wilfred King, Kiashke Zaaging Anishinaabek – Gull Bay First Nation. "I am so proud that the Giizis Energy Solar Storage Micro Grid will be 100% owned by our community. The impact of the Giizis Energy Solar Storage Micro Grid is significant and substantive, including: community-centred economic development and jobs; community infrastructure improvement, a healthier community; diesel and GHG reduction, and a stronger Kiashke Zaaging Anishinaabek community."

"Chief King and Gull Bay First Nation are using entrepreneurship and ingenuity to be leaders in the fight against climate change – the single greatest issue facing our planet right now. This project is an example for the country of the positive work First Nations are doing right now to address climate change in a way that benefits their citizens, the economy and the environment."  - National Chief, Peter Bellegarde

"This innovative project will help reduce the burning of diesel fuel and will integrate renewable solar generation and energy storage into the community's existing power system," said Paul Giardetti, OPG Vice-President Northwest Operations. "By working together with KZA, OPG has developed a micro grid that is the first step towards a long-term energy supply solution that is both reliable and environmentally sustainable."

"Ontario is proud to support KZA/Gull Bay First Nation's micro grid, an innovative project that will provide the community with a reliable and cost-efficient energy supply," said Greg Rickford, Minister of Energy, Northern Development and Mines. "This investment in the energy system will help to support economic growth in the community, signaling that this region, like the rest of the province, is open for business and open for job creation."

"Today is a day of celebration for the community of Kiashke Zaaging Anishinaabek (Gull Bay First Nation). The Giizis Energy Micro Grid is an Indigenous-led, first of its kind, innovative approach to energy creation. This micro grid will provide clean, renewable energy to the community, reduce their reliance on diesel and serve as a catalyst for future economic development. We are proud contributors to this project and I applaud the Chief and Council for their leadership and congratulate the entire community for this achievement!" – The Honourable Seamus O'Regan, P.C., M.P., Minister of Indigenous Services Canada.

"Hydro One is proud to be a part of this Indigenous-led initiative, which is an innovative and first-of-its-kind project in Canada," said Kraemer Coulter, Managing Director, Hydro One Remote Communities Inc. "This project will provide clean and renewable power to the community of Kiashke Zaaging Anishinaabek for generations to come."

"A reliable and cost-effective source of electricity is the economic foundation on which any strong and vibrant community is built. The IESO is proud to support the Gull Bay First Nation Micro Grid Project, which is a great example of how innovation is allowing remote communities to take a more active part in how, when and where they get their energy."  - Terry Young, Vice President Policy, Engagement, and Innovation for Ontario's Independent Electricity System Operator.

"Since time immemorial the Ojibway people of Kiashke Zaaging Anishinaabek – Gull Bay First Nation have been stewards of the Waters of Lake Nipigon, and the surrounding Lands - the Territory of our people.  For generations, the KZA community and its leaders have made wise decisions that protect Waters, Land, Animals, Fish and Medicines, and live in harmony with Nature.

Energy is vital for the community's sustainable livelihood, for homes, community services and for economic development that sustains Elders, Children, Youth and Families.  As a remote, off-grid community, not serviced by bulk power transmission lines, KZA is reliant on polluting and costly diesel power.

The Kiashke Zaaging Anishinaabek people want to ensure that our use of energy is as efficient as possible with low ecological impact, especially in relation to reducing reliance on fossil fuels that cause Climate Change.

I am deeply honoured to preside over this Launch Ceremony of the Giizis Energy Solar Storage Micro Grid project.  It is a game changer for Kiashke Zaaging Anishinaabek community, Ontario and Canada. The KZA Council, Administration and Membership have been fully involved in all aspects of the project's development.

The KZA Band Council and Giizis project team is also 100% prepared to share our project planning and construction experience with any First Nation, Métis and Inuit community across Canada that wants to get off diesel.  It would be our honour to welcome all Indigenous people to tour the Giizis Energy Solar Storage facility.

Kiashke Zaaging Anishinaabek has built the Giizis Energy Solar Storage Micro Grid with the support of our highly-qualified development partner, Ontario Power Generation.  We are most grateful for their support and expertise.  We also want to express a huge Thank You to the many funders of the project including: the Ontario Smart Grid Fund, Ontario's Northern Ontario Heritage Fund, Independent Electricity Systems Operator, Hydro One Remote Communities Inc., Natural Resources Canada, Indigenous Services Canada, MaRS and others.  Without your assistance, the Giizis Energy Solar Storage Micro Grid would not be a reality.  I also want to thank the many project team members including:  Alltrade, ABB, Stantec, DNV-GL, TBT Engineering, and KZA's clean energy advisor, Lumos Energy."

As a global climate change leader and the largest, most diverse electricity generator in the province, Ontario Power Generation and its family of companies are helping lead the charge to a post-carbon economy....