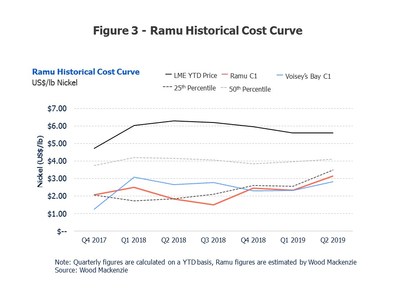 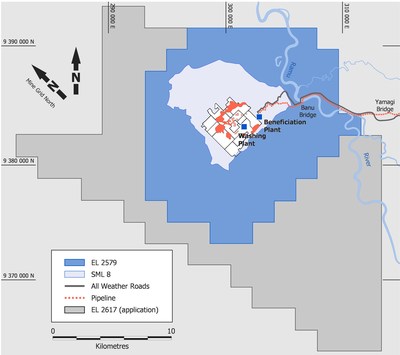 Anthony Milewski, Chairman and CEO of Cobalt 27, commented, "We are excited to be releasing additional information on the Ramu asset so that investors can better understand the world-class nature of this operation and the nickel and cobalt exposure it provides to investors. Ramu is a first-quartile project on the global nickel cost-curve, has an extensive mine life, with potential to deliver 30+ years, and compelling exploration upside. The hydroxide product produced at Ramu is optimal for electric vehicles and battery storage markets, in fact already being sold to battery makers, enhancing shareholders' nickel exposure at a time when global inventory levels are approaching levels not seen since the end of 2012, when nickel was trading at approximately US$8 per pound, on average."

The technical report was independently prepared by Behre Dolbear Australia Pty Ltd. ("BDA") after several months of working with majority owner and operator, Metallurgical Corporation of China Limited ("MCC") to conduct required due diligence and site visits. MCC is a major Chinese State-owned construction and operating company ranked in the Fortune Global 500. Ramu is comprised of the Kurumbukari mine, which utilizes conventional open-pit mining methods and beneficiation plant designed to treat around 4.6 million tonnes of ore per annum, located in the foothills of the Bismarck Ranges; and the Basamuk processing plant ("Basamuk Plant") located on the East coast of Papua New Guinea, approximately 55km southeast of Madang. Beneficiated ore is transported from the mine via a 135 km slurry pipeline to the Basamuk Plant which is designed to produce a mixed nickel-cobalt hydroxide product ("MHP") containing around 32,600 tonnes nickel and 3,300 tonnes cobalt on an annual basis. MHP production for 2017 and 2018 has exceeded design capacity (106% and 108% respectively). BDA considers that commissioning and ramp-up was completed in 2015, and that the plant is capable of operating at design capacity going forward.

BDA has developed a life of mine ("LOM") cash flow forecast model for Ramu using Proven and Probable Mineral Reserves based on the macroeconomic assumptions set out in detail in the technical report. Over the current LOM of 14 years from 2019, Ramu projects that 52.3Mt of ore will be processed to produce 428,000 tonnes of nickel and 47,000 tonnes of cobalt in MHP. The LOM capital costs are projected to total US$247 million, for sustaining capital. Projected operating costs over the LOM are expected to remain consistent with actual operating costs experienced to date. Based on Wood Mackenzie's independent analysis of global primary nickel producers, Ramu has positioned itself at or near the bottom quartile of global production based on a C1 cash cost basis since late 2017. This supports that Ramu has been profitable on a C1 basis at all points of the nickel commodity cycle over the last few years. Projections for revenue are based on the Mineral Resource and Reserve estimates and continuation of current production levels.

Ramu has an established history of operations since being commissioned in 2012. In the last two years, the refinery has exceeded design capacity, producing an average of approximately 90,000 tonnes per annum of MHP containing 35,000 tonnes of nickel and 3,300 tonnes of cobalt. Current guidance for 2019 indicates that similar production levels will once again be attained. A summary of Ramu's historical ore and MHP production is shown in Table 1 and Figure 2.

The Mineral Resource and Reserve estimates for the Ramu nickel and cobalt deposit have been carried out under the guidelines of the Australasian JORC Code by Competent Persons as defined by those guidelines. The JORC Code guidelines are compatible with the requirements of NI 43-101 in this regard. Summary Mineral Resources Reserves extracted from the report are summarized in Tables 2 and 3, respectively.

The Ramu technical report is available on SEDAR at www.sedar.com and on the Company's website www.cobalt27.com

Ramu is a joint venture between MCC Ramu, which has 85% ownership and is the operator of the project, and Ramu Nickel Limited, a wholly owned subsidiary of Cobalt 27 with an 8.56% interest, and Mineral Resources Madang Limited (landowner entity) and Mineral Resources Ramu Limited (government entity) which hold 2.5% and 3.94% interest respectively, and which are both managed by Mineral Resource Development Corporation ("MRDC"). MRDC is a PNG Government entity which holds the government interest of 3.94% and manages the landowners' interest of 2.5% in trust for the landowners. MCC Ramu is wholly owned by MCC-JJJ Mining whose shareholders are MCC with 67.02%, Jilin Jien Nickel Industry Limited (13%), Jiuquan Iron and Steel (Group) Limited (13%) and Jinchuan Group Limited (6.98%).

As disclosed in the Company's press release dated June 18, 2019, Cobalt 27 and Pala Investments Limited ("Pala") have entered into an agreement pursuant to which Pala will acquire 100% of Cobalt 27's issued and outstanding common shares (other than the approximately 19% that Pala already owns), for C$5.75 per common share, comprised of C$3.57 in cash plus C$2.18 in shares of a newly listed company to be named Nickel 28 Capital Corp. ("Nickel 28"). Nickel 28 will hold the joint venture interest in Ramu, among other assets including a royalty portfolio on future projects, certain equity positions, and US$5 million in cash with no corporate debt.

The scientific and technical information in this news release has been prepared, reviewed and approved in accordance with Canadian regulatory requirements by, or under the supervision of Dr. Qingping Deng, Peter D. Ingham, Roland Nice, and Adrian Brett, of BDA, all of whom are independent Qualified Persons as set out in NI 43-101.

The Mineral Resource estimate set out in this news release was classified according to the CIM Definition Standards for Mineral Resources and Mineral Reserves (November 2010) by Dr Qingping Deng, of BDA.

The Mineral Reserve estimate set out in this news release was classified according to the CIM Definition Standards for Mineral Resources and Mineral Reserves (November 2010) by Peter D. Ingham, of BDA.

The forward-looking statements contained herein are made as of the date of this release and, other than as required by applicable securities laws, the Company does not assume any obligation to update or revise them to reflect new events or circumstances. The forward-looking statements contained in this release are expressly qualified by this cautionary statement.