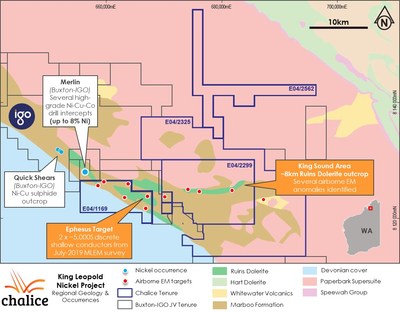 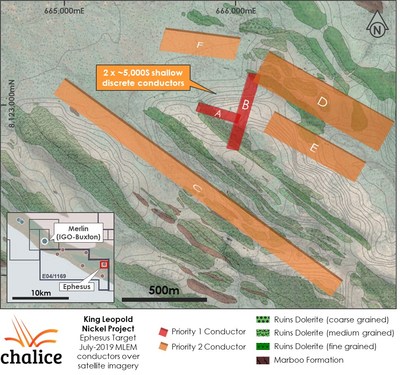 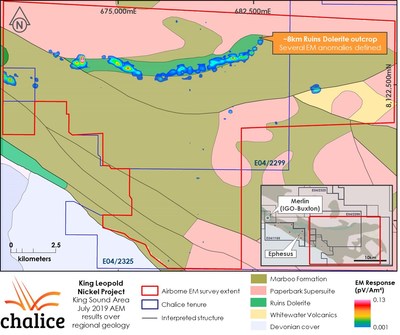 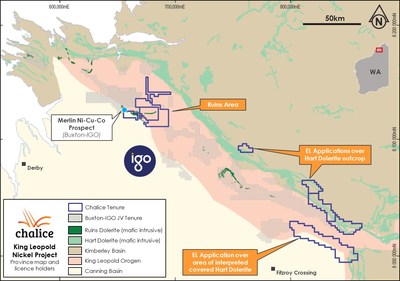 Commenting on the results, Chalice's Managing Director Alex Dorsch said: "Our first program of ground-based and airborne geophysics has delivered encouraging early-stage results. Given we have only owned the project for a couple of months, we have made great progress on the project in a short timeframe."

"The recently completed airborne EM survey over the previously untested King Sound Area has also identified promising additional targets that will be further refined with ground-based EM surveys ahead of the drill program. We are very much looking forward to the start of RC drilling next month."

All high-priority targets identified are located within or near outcropping / sub-cropping Ruins Dolerite, a known host rock of high-grade magmatic nickel sulphides in the province.

A MLEM survey was completed over E04/1169, where Chalice owns 100% of the hard-rock mineral rights. The program followed up on four priority targets identified from the previous "Xcite" Airborne EM survey in 2018, with the objective of defining drill-ready, discrete, late-time EM conductors.

Conductors A and B have a strong conductance of ~4,800 and ~5,000 Siemens respectively, and are modelled at a shallow depth within an extensive suite of Ruins Dolerite. The interpreted source of the conductors is massive sulphides.

Conductors C to F are modelled with low to moderate conductance (<3,000 Siemens) and based on field reconnaissance are likely sourced from pyritic and/or graphitic units. They are therefore considered to be lower priority for follow-up drill testing.

All conductors will be field checked in the coming weeks in order to locate any surface expressions of the conductive sources.

Table 1 below summarises the properties of each significant conductor identified to date at the Ephesus Target.

Chalice is encouraged by this first phase of MLEM, with two highly prospective drill targets already identified in a similar geological setting to the nearby Merlin Prospect owned by Buxton Resources (ASX: BUX) and Independence Group (ASX: IGO). Buxton's Merlin Prospect has had several phases of EM and drilling, with drill intercept grades up to 8% Ni reported.

A SkyTEM airborne EM survey was recently completed over E04/2299 and E04/2325, where Chalice is earning an 85% JV interest. This survey is the first geophysical program to be completed over this area, which includes an ~8km outcropping strike length of prospective Ruins Dolerite.

A total of 1,394 line kilometres were flown at 150m line spacing, which generated clear and high-quality EM anomalies in a highly resistive environment.

A heritage survey is planned in late August on the southern areas of E04/1169 as well within key areas of interest on E04/2299 and 2325. Field reconnaissance and further ground EM will then commence in early September at the King Sound Area, as well as at two additional targets on E04/1169.

RC drilling at the Ephesus Target and potentially additional King Sound ground EM targets is expected to commence in mid-late September. The program may be expanded subject to the results of the next phase of reconnaissance and geophysics.

The King Leopold Nickel Project covers an area of ~1,800km2 in the west Kimberley region of Western Australia (Figure 4). The Project covers several known areas of Ruins and Hart Dolerite, which are both considered highly prospective for magmatic nickel sulphides as well as other related metals (Cu, Co and PGEs).

The Ruins Dolerite has been demonstrated to host high-grade nickel sulphides (drill intercept grades up to 8% Ni) after the Merlin discovery in 2015 by Buxton Resources (ASX: BUX). Buxton has since executed two option and earn-in joint venture agreements with Independence Group (ASX: IGO) and large-scale exploration activities are underway in the region. The JV has also substantially increased its licence holding in this frontier province.

Chalice's King Leopold Nickel Project is a combination of several 100% owned exploration licences, 100% owned hard rock rights as well as an earn-in agreement (earning up to 85%). Field activity on the Project commenced in late June 2019, initially focusing on areas immediately adjacent to the Merlin discovery.

The information in this announcement that relates to Exploration Results in relation to the King Leopold Project is based on information compiled by Dr. Kevin Frost BSc (Hons), PhD, a Competent Person, who is a Member of the Australian Institute of Geoscientists. Dr. Frost is a full-time employee of the Company and has sufficient experience that is relevant to the activity being undertaken to qualify as a Competent Person as defined in the 2012 edition of the Australasian Code for Reporting of Exploration Results, Minerals Resources and Ore Reserves, and is a Qualified Person under National Instrument 43-101 – 'Standards of Disclosure for Mineral Projects'. The Qualified Person has verified the data disclosed in this release, including sampling, analytical and test data underlying the information contained in this release.  Dr. Frost consents to the inclusion in the announcement of the matters based on his information in the form and context in which it appears.

Forward-looking statements relate to future events or future performance and reflect Company management's expectations or beliefs regarding future events and include, but are not limited to, the Company's strategy, the likelihood of exploration success at the Company's projects including King Leopold, the prospectivity of the Company's exploration projects including King Leopold, the timing of future exploration activities on the Company's exploration projects, planned expenditures and budgets and the execution thereof, the timing and availability of drill results, potential sites for drilling, the timing and amount of estimated future production, costs of production, capital expenditures, success of mining operations, environmental risks, unanticipated reclamation expenses, title disputes or claims and limitations on insurance coverage.

In certain cases, forward-looking statements can be identified by the use of words such as , "planning" or, "is expected", "will", "may", "potential", "promising", "prospective" or variations of such words and phrases or statements that certain actions, events or results may, could, would, might or will be taken, occur or be achieved or the negative of these terms or comparable terminology. By their very nature forward-looking statements involve known and unknown risks, uncertainties and other factors which may cause the actual results, performance or achievements of the Company to be materially different from any future results, performance or achievements expressed or implied by the forward-looking statements.

Such factors may include, among others, risks related to actual results of current or planned exploration activities; changes in project parameters as plans continue to be refined; changes in exploration programmes based upon the results of exploration; geophysical anomalies identified may or may not be associated with economic mineralisation, future prices of commodities; grade or recovery rates; accidents, labour disputes and other risks of the mining and exploration industry; delays in obtaining governmental approvals or financing or in the completion of development or construction activities; as well as those factors detailed from time to time in the Company's interim and annual financial statements, all of which are filed and available for review on SEDAR at sedar.com, on ASX at asx.com.au and OTC Markets at otcmarkets.com.