BRAMPTON, ON, Nov. 27, 2019 /CNW/ - A capacity crowd gathered at The Rose on Monday, November 25 as Mayor Patrick Brown presented former Premier the Honourable William (Bill) G. Davis with the Key to the City of Brampton.

A celebratory vehicle procession took place from the former Premier's home in downtown Brampton to The Rose, followed by a formal Key presentation at the theatre. 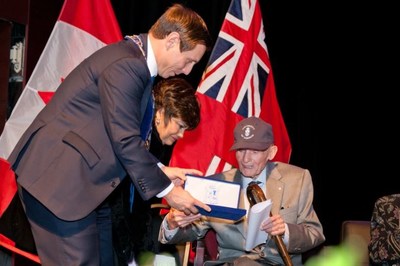 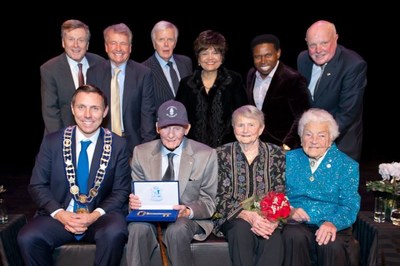 "I cannot think of anyone who has had a bigger impact over the past 60 years. From 1959 to 1985, Bill Davis served the residents of Brampton. He was always accessible and worked hard to deliver programs and services for the community. While he crisscrossed Ontario, he was always our best ambassador, as most speeches had to mention Brampton three or four times," said Mayor Patrick Brown in his speech.

"I watched this man as my leader, as my boss, as a father and grandfather, and mostly as a friend, and the decency, the patience, the willingness to look at the other person's view, the complete lack of any desire to divide or to judge people, the effort to work together to get things done – these all radiated Brampton values," said Toronto Mayor John Tory in his speech.

"As the creator of community colleges in Ontario, he has touched the lives of millions of young Ontarians to prepare them to take their place in the world and contribute to the economy of Ontario and Canada," said former Mississauga Mayor and current Chancellor of Sheridan College Hazel McCallion after the event.

"On that platform of education, you gave youth - gave students - across this province a hand up, not a handout, and you empowered them not to get something, but to be something, and to have the dignity to be able to do that themselves," said Michael "Pinball" Clemons in his speech. "Today, you're going to receive the Key to the City, but you already have the key to our hearts."

A reception in The Rose lobby followed, where guests had the opportunity to meet one of Brampton's most prominent residents, and one of Ontario's most accomplished premiers.

The Honourable William (Bill) Grenville Davis was first elected to the Ontario Legislature in the 1959 election for the constituency of Peel at age 29. He served as Minister of Education from 1962 to 1971 and Premier of Ontario from 1971 to 1985. He grew up in Brampton, and has made lasting contributions in Brampton and across Ontario.

As Minister of Education, Davis created new universities, including Trent University and Brock University, opened twenty-two community colleges, and established the TVOntario educational television network in 1970. Brampton is home to the Davis Campus at Sheridan College. As Premier, his government expanded the provisions of the Ontario Human Rights Code, granted free education for Catholic Secondary school pupils, and contributed to the finalization of the 1982 Constitution Act. Davis has received more than 18 honorary degrees from various institutions in Ontario and abroad. Today, he continues to be involved in charitable work, and is an advocate for education.

About the Key to the City

The Key to the City is a symbolic honour that the City of Brampton bestows upon a highly valued member of the community, or a celebrated or dignified guest of the City, who has made an impact on the lives of Bramptonians. It is presented at the discretion of the Mayor.

As one of the fastest-growing cities in Canada, Brampton is home to 650,000 people and 70,000 businesses. People are at the heart of everything we do. We are energized by our diverse communities, we attract investment, and we are embarking on a journey to lead technological and environmental innovation. We partner for progress to build a healthy city that is safe, sustainable and successful. Connect with us on Twitter, Facebook, and Instagram. Learn more at www.brampton.ca.

SOURCE The Corporation of the City of Brampton

The Corporation of the City of Brampton