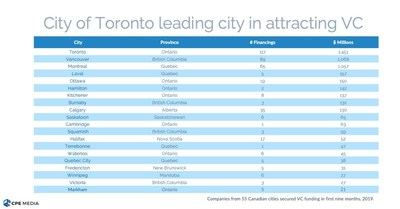 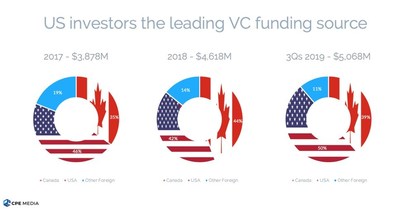 "Canadian VC disbursements are on a historical record setting pace for the first three quarters of 2019. At the midpoint of Q4, 2019, total VC disbursements were already tracked at $6.1 billion; 2019 is posed to best the $6.5 billion record reported in 2000. With continuing and unabated investments from US and foreign investors, 2019 is truly shaping up to be a record year for the Canadian venture capital industry," said Ted Liu, President of CPE Media Inc.  "As Canada's only complete VC data provider, we are focused on providing accurate and comprehensive information not only on information where the VC money went to, but on fundamental information where the VC money came from, so industry stakeholders can have better intelligence and understanding about the ever evolving and changing Canadian VC ecosystem."

"The data reveal many continuing trends, including the growing presence of foreign, largely US investments and the increasing prominence of larger funding rounds. The overall strength in investing and fundraising volumes in Canada largely mirrors the pattern of activity elsewhere, including the US and speaks to the full onset of the fourth industrial revolution globally," commented Richard Remillard, President of Remillard Consulting Group (RCG).

First nine months, 2019 - Venture Capital disbursements (where all the funding went - to companies, not to investors in secondary transactions or recaps)

First nine months, 2019 - Venture Capital funding sources (where all the funding came from)

Fundraising by Canadian venture capital firms and others

About CPE Media Analytics, a service of CPE Media Inc.

Backed with over 25 years of private capital research experience, CPE Media Analytics, through financings.ca, offers verified and comprehensive data coverage and analysis on venture capital and private and public capital. We are Canada's only data provider that specifically tracks and provides complete venture capital information, including fundamental information on where VC money came from (by investor types and by geographic sources), and VC firm fundraising. https://financings.ca