VANCOUVER, BC, Sept. 24, 2020 /CNW/ -- A bold billboard campaign has launched in Vancouver to increase awareness and knowledge about overpopulation. The "One Planet, One Child" ad campaign is an effort to hasten progress toward a small family norm, leading to a sustainable world population.

Billboards and transit stop ads in high-traffic areas feature a variety of sustainable population messages. Some include happy families with the headline, "We Chose One!" or "We Chose Childfree!" Other ads proclaim: 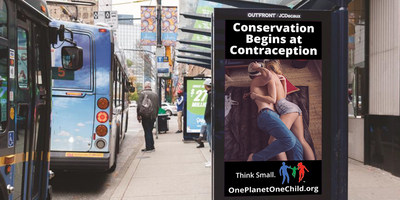 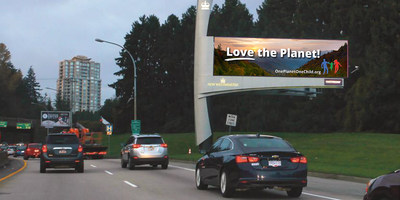 The campaign is the brainchild of nonprofit World Population Balance. Executive Director Dave Gardner notes, "We want to get Canada talking about overpopulation. A surprising number of journalists, elected officials, and the public are unaware the world is overpopulated or uncomfortable talking about it. Many don't realize the solution to overpopulation – and much of the environmental destruction it causes – is simply to embrace the accelerating trend toward freely chosen smaller families." Birth rates are less than half what they were sixty years ago; more women and couples today are choosing to delay or skip parenthood. The campaign celebrates and supports these informed, considered decisions.

Posting overpopulation billboards is a bold move because the topic is frequently avoided – considered controversial by some, and subject to misassumptions. "That's why this campaign is needed – to debunk myths and correct misassumptions," asserts Gardner. "This is a positive campaign. It encourages couples around the world to make their own informed and considered decisions about family size. We're not dictating anyone's choice. We're celebrating and thanking people for small-family decisions."

The campaign launched in the U.S. and Canada because, the campaign website notes, "overpopulation…is a very real problem in the industrialized world where each new person added has an over-sized impact on the environment. Even though birth rates are already low in the 'overdeveloped world,' they need to be even lower in order to speed contraction back to a sustainable population level."

The website specifies that while addressing overpopulation is essential, it's not the only contributor to environmental crises. Overconsumption must also be addressed, but if population doesn't contract, everyone must live at poverty-level to bring humankind into sustainable balance with nature.

Conversations fostered by the One Planet, One Child campaign will bring better information to light - such as addressing the belief that more people are needed for the sake of constant economic growth. "We don't need to make or import more people to stoke economic growth; an economy's size needs only to match the population, just big enough to meet our needs," notes the organization's Erika Arias, who co-hosts The Overpopulation Podcast.

Arias concludes, "The small-family solution to overpopulation is compassionate, voluntary, and ethical. It's the most loving thing we can do for the children of the world. Small families are helping to create a healthy planet, better lives and a promising future."

Members of the team are available for interviews via Zoom, Skype, telephone, etc. Actual photos and drone footage, when available, plus other graphics and video for media use, at https://oneplanetonechild.org/media-resources/.

About World Population BalanceWorld Population Balance works to alert and educate that overpopulation is a root cause of resource depletion, species extinction, poverty, and climate change. The nonprofit's mission is to chart a path for human civilization that – rather than causing greater misery – enables good lives on a healthy planet. The organization advocates and supports a smaller, truly sustainable human population – through dramatic and voluntary reduction in birth rates.